“Meg Fletcher spent her childhood dreaming of escaping Dare Island—her family’s home for generations. So after she landed a high-powered job in New York City, she left and never looked back. But when she loses both her job and the support of her long-term, live-in boyfriend, she returns home to lick her wounds and reevaluate her life.

Helping out her parents at the family inn, she can’t avoid the reminders of the past she’d rather forget—especially charming and successful Sam Grady, her brother’s best friend. Their one disastrous night of teenage passion should have forever killed their childhood attraction, but Sam seems determined to reignite those long-buried embers. As Meg discovers the man he’s become, she’s tempted to open her vulnerable heart to him. But she has no intention of staying on Dare Island—no matter how seductive Sam’s embrace might be… “

I’ve been looking forward to this book for a year now – ever since reading the first in the Dare Island series “Carolina Home.” I knew it would be about Meg, the only Fletcher daughter, and Sam, long time friend of the family. The road to their HEA looked like it would be full of conflict and fire. The fact that the title reminds me of the classic beach music song by General Johnson and the Chairman of the Board didn’t hurt either.

Though this is the 2nd book in the series, the background of the first one is gently laid out without an info-cram of places, events and people. I think people could easily pick this one up and start here. 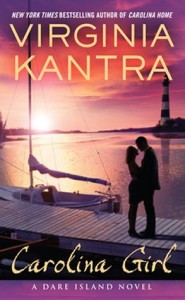 This series shows small town life but doesn’t glamorize it. People know your business, know you and know your history which can be good or bad,. Sometimes this is intrusive while at other times they’re there to lend a helping hand. It’s a small town romance without the meddling that often makes me DNF a story set in some idyllic Small Town.

The family relationships ring true. The Fletcher children have always been “back to back to back” as the result of growing up as Marine brats but that doesn’t always mean they’ve gotten along perfectly. Still when the need is there, they’ve got each others’ backs as well as being supportive children. I’m still enjoying the overall family arc. Parents Tess and Tom are example of how it’s done right and how love is a give and take. Tom might be a retired Marine but it’s obvious that Tess is the backbone of the Fletcher family. Taylor’s journey to accepting her new life and the people in it sounds right.

They’ve been friends for 20 years but Meg and Sam have to learn to be partners and lovers. The sex is great but, thank goodness, not everything. Sam has always charmed every female around, except for Meg who thinks she can see through his techniques. Only she learns she might not know him as well as she thought. Sam has always seen the intense drive behind everything Meg has done to escape the island and achieve a big city life. But he’s managed to miss much of the insecurity she’s kept deeply hidden. Both Sam and Meg feel fully fleshed out with backgrounds, issues, triumphs and failures but without the “poor, pitiful, woe is me” angst trying to substitute as characterization.

The main thing that bothered me is how much of a dick Meg’s boyfriend is and how Meg doesn’t see it. Focused on equality and goals is one thing but he’s such an anatomically correct Ken doll and nothing else that for such a smart person, she seems slightly foolish about their relationship.

Meg and Sam fled to get away – she from service industry and working class life and he from his father’s demands and lack of family life. Neither is wild about coming back to the island full time as it might be seen as having failed. Both have dreams they still want to see happen and I love that they discover ways to make them happen that are fulfilling and don’t require too much to be given up.

Both make changes and compromises. Sam says he’s going to grovel to get Meg back but Meg doesn’t let him. Both admit they were slightly wrong and slightly right and it all evens out as they are finally right together and at the right time. Sam realizes that he can’t issue ultimatums and Meg – thanks to her mother’s sage advice – figures out a way to have her cake and eat it too, without whining. Win-win

I’m intrigued by glimpse of the third book and think I’ve got the heroine figured out. We’ll see if I’m correct. In the meantime, I’m going to play some of my classic beach music, shag around the house a little – and no that’s not as dirty as it might sound to the British – and plan a trip to the beach soon. B+

→ Jayne
Previous article: The Plagiarizing of Tammara Webber’s Easy by @JordinBWilliams
Next Post: Daily Deals: Starting at the beginning, with Sara