REVIEW: Carol of the Bellskis by Astrid Amara 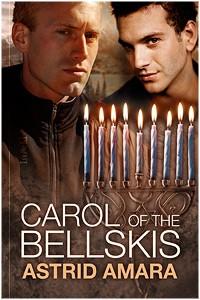 I was reminded about your Holiday Outing by Jessica’s review of it at Racy Romance Reviews. I read Holiday Outing and enjoyed it, I think when it first came out, before I was reviewing. I especially loved the perfect depiction of a Jewish family, with all their lumps and bumps, but I thought that the family situation got too much attention and the relationship too little. Carol of the Bellskis rectifies this situation and is, I think, going on my keeper shelf.

The story opens with Seth breaking up with his boyfriend, who also happens to be his boss. He’s furious and desperately hurt when Lars refuses to go to Seth’s aunt and uncle’s kosher B&B like he said he would because of what people might say. Lars is afraid of being outed. Despite it being completely obvious to the reader and to Seth that he loves Seth, he refuses even to treat Seth with civility at work in case people suspect. Seth can’t take it anymore and breaks up with Lars. He then drives the five hours to the B&B only to discover that his aunt and uncle are missing and there’s an inn full of guests expecting kosher food and Hanukkah celebrations every night. He muddles badly through the first evening and is despairing in the kitchen when Lars shows up. Lars saves his bacon (harhar) by being a brilliant cook and they work through their relationship issues while catering to a houseful of guests and dealing with the search for Seth’s missing relatives. It sounds like a full story, especially for just less than 100 pages, and it is, but it’s perfectly done, because no matter what’s actually happening — searching for a lost dog under the house, say — the focus is always on Seth and Lars working things out.

And I love how Seth doesn’t immediately take Lars back. He’s furious and hurt and aching and he makes Lars sleep on the couch. I love how Lars is desperate to get back into Seth’s good graces that he puts up with anything from Seth but doesn’t back down about coming out. I love that Seth is still furious with Lars, still terribly hurt and that he isn’t afraid anymore to let Lars know, no matter how much it might hurt Lars to hear it:

I love Lars’ obvious fight with himself:

Lars immediately entered the room and crouched at Seth’s feet. He looked up. For once he appeared uncertain.

"How can we resolve this?" Lars asked quietly. "There has to be a compromise we can settle on."

"I don’t want to be something you’re ashamed of anymore."

Lars hesitated. But he didn’t pull away. He bowed his head and rested it on Seth’s thigh.

As Seth asks himself at one point:

Why the hell were relationships so fucking hard?

And that’s what I love about this story. Seth and Lars obviously have a good relationship, but they’ve hit a bump and they have to work on it, and its every bit as emotionally wrenching as it should be. Every relationship in the book — and there are quite a few of them with so many guests in the house — has a small or large issue that has to be worked through. It shows what happens AFTER the HEA and does it so well.

One drawback to the story was also one of its strengths. The story is told entirely from Seth’s perspective. You’re very good at making it obvious what Lars is thinking and feeling, so I didn’t miss his perspective too much, but it almost felt like an Old Skool Harlequin in that we only got one point of view. It’s very well done and by no means lacks emotional impact because of it, but it’s basically a first-person perspective, told in third person.

But it’s also laugh-out-loud funny in some places:

Neither does the story shy away at all from the fact that these are Jews we’re talking about:

Lars had tremendous prospects of becoming a very good Jewish mother. He had the food portions right, at least.

The main issue I had with the story was Lars’ motivation. He was terrified of being outed, convinced somehow for some reason that his life would be over if he came out. I am somewhat impatient with this motivation, especially since it’s never really fully justified. Yes, Lars is worried about the response of his homophobic business partner, but as Seth says, it’s his fucking business too. I guess I think in this day and age, in a metropolitan setting, generic fear of coming out is no longer an adequate reason not to come out and needs more explanation, rather than less. Or at least, in this story, I was just impatient with Lars’ stubbornness about the issue — which is perhaps precisely what you wanted. However, that said, it was obvious that Lars fully believed in his own fear and his change of heart at the end was strongly felt and signaled his full and total commitment to his relationship with Seth, so that almost made it all okay.

All in all, I adored this story and now plan on glomming your entire backlist. The hectic situation of the B&B was handled beautifully in that the focus of the story was always 100% on the relationship between Lars and Seth and by the end of the story, I fully trusted that they’ll make it.

This book can be purchased at Loose Id.