With books like Kiss an Angel and Nobody’s Baby But Mine, you were once one of my favorite contemporary authors. That’s actually saying a lot, considering that I’ve always been much more of a historical romance girl. But as time has gone on my tastes have changed, and my reading of your latest books has been spotty – I read Ain’t She Sweet at Janine’s recommendation, and liked it a lot, and I read Match Me If You Can (goodness, was that five years ago?) and thought it was pretty good. But I haven’t felt compelled to read every new book you publish – in fact, your last one is still sitting on my Sony Reader waiting for me. Somehow, though, when Call Me Irresistible landed in my lap, it felt like the right time to try you again. I was quickly reminded of what I like (and what I don’t like) about your writing. 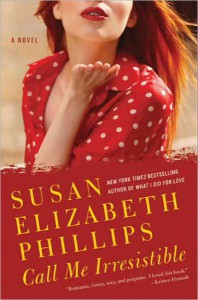 Meg Koranda has traveled to the small town of Wynette, Texas to be a bridesmaid in the wedding of one of her closest friends, Lucy Jorik. Lucy is marrying Ted Beaudine, and the marriage is a Big Deal, because of the celebrity connections of both the bride and groom. Ted is the son of a legendary pro golfer. Lucy is the adopted daughter of the former President of the United States. Meg herself has famous parents: an actor/director/screenwriter/plumber/cardiologist (/slight exaggeration) father and an ex-model mother.

These connections bugged me immediately for two reasons. First of all, these characters all come from previous books – not only books in this series but unrelated ones. The famous golfer and his wife are Dallas and Francesca from Fancy Pants. The ex-President and her husband are Cornelia and Matt from First Lady (a book Lucy appears to have debuted in, as well). By my count, characters from no fewer than five previous books appear in Call Me Irresistible. That’s just too many for me, for a number of reasons. One being that it leads to awkwardly shoehorned reminiscences like this one:

"I sure do remember the ugly," Skeet said. "Like the time Dallie and Francie had an altercation in the parking lot. Happened more than 30 years ago, long before they were married, but people still talk about it today."

"That's true," Ted said. "I can't tell you how often I've heard that story. My mother forgot she's half my father's size and tried to take him down."

"Damn near succeeded. She was a wildcat that night, I can tell you," Skeet said. "Me and Dallie's ex-wife couldn't hardly break up that fight.

"It's not exactly the way they're making it sound," Dallie said.

"It's exactly the way it sounded." Kenny pocketed his cell after checking on his wife.

"How would you know?" Dallie grumbled. "You were a kid then, and you weren't even there. Besides, you've got your own history with the Roustabout parking lot. Like the night Lady Emma got upset with you and stole your car. You had to run down the highway after her."

There’s just too much “remember the time…?” exposition in this book for my taste (granted, my taste allows for basically none, at least none written in such an obvious fashion as the passage above is). I’m not sure what the purpose even is. It doesn’t give readers who haven’t read those books any information they really need. Readers who have read those books will either remember those scenes on their own, or they won’t – again, it doesn’t add anything to the story. If it does anything, it points out the the similarities in the h/h relationships in these books (these relationships tend towards the adversarial).

Anyway, Meg and Ted clash immediately, and after Meg questions her about marrying Ted, Lucy does a runner at the wedding, leaving Wynette’s favorite son (and mayor!) standing at the altar, and the entire town blaming Meg. This wouldn’t be too great of a problem, if Meg could just leave town – Meg is quite the world traveler and would be happy to see the back of Wynette. The problem is, Meg’s parents have cut her off, for good this time, and Meg finds that she can’t cover her hotel bill. Meg is forced to work off her debt to the sadistic hotel manager, who, along with everyone else, hates Meg for crushing poor Ted. No one seems to blame Lucy herself nearly as much as they blame Meg, which may just have to do with proximity, Lucy having disappeared entirely. (Presumably getting into hijinks somewhere in her own book, which is supposed to come out next.) Also, no one pays much attention to the fact that Ted certainly doesn’t seem heartbroken (though this does not keep Ted from being angry at and tormenting Meg).

By the time Meg has paid off her hotel bill, she has realized that she kind of likes the unexpected feelings of satisfaction and self-respect that come with working for a living. Plus, she still doesn’t have much money to actually get anywhere, and she’s got a clunker of a car that probably wouldn’t take her far, anyway. So she gets herself a job serving drinks from a cart at the golf course. This allows for frequent clashes with Ted, who is often at the course wooing an investor for his planned golf resort. In spite of their emnity, Ted and Meg just can’t seem to stay away from each other (crazy, isn’t it?).

One of my main issues with the book (other than the sequel-itis I mentioned above) is the over-the-top nature of the characters, which I admit is a personal peeve of mine. I don’t read Jackie Collins or Danielle Steel because I perceive them as writing about the rich, famous and beautiful, and while I don’t necessarily want to read about ordinary people – I get that enough in my daily life – I don’t like it when the characters in the romances I read are what I call “-est” types. Meaning: wealthiest, prettiest, manliest, smartest, etc. All these famous, extraordinary people in one story strains credulity (especially with a number of them living in this small Texas town). The characters that aren’t freakishly good looking and accomplished are just freakish, small-town busybodies and eccentrics, rather broadly drawn.

I think what I find difficult to reconcile myself to is the cartoonish aspect of your books. Some romances are more realistic than others, and for some reason, I always expect an SEP romance to be on the more realistic side. I don’t know why, because they never really are. Not only are the characters usually broadly drawn, but the situations tend to be, too. And strangely, that’s a strength of your writing as well as a weakness, in my opinion.

Let me explain: I’ve always been drawn in my romance reading to sturm und drang, to heightened emotions and angst. This may seem to contradict what I’ve said above, but I think there are specific scenarios in which over-the-top works for me. One is that I prefer it to be over-the-top drama rather than comedy (over-the-top comedy works for me in some mediums, but not in romance). The other is that it has to have some authentic emotional component to it, even if it’s heightened beyond a believable degree.

This brings me to what works for me in many of your books, and worked in Call Me Irresistible: I really like the heroine’s downtrodden outsider status. My romance tastes have changed and matured over the years, but I’m still a sucker for a Cinderella heroine. Meg fits the template of a number of SEP heroines (the heroine of Kiss an Angel comes to mind). This heroine is basically good-hearted but somewhat spoiled and badly in need of something that will shake her up and force her to stand on her own two feet. She finds herself in a situation where her usual resources (money, looks) don’t work, and where seemingly everyone is against her. The heroine is repeatedly humbled (sometimes a bit too repeatedly, in my opinion – I’m not a sadist), but discovers an inner strength and growing self-respect. It’s really a very appealing formula, at least for me. There are some flaws: I often find that the secondary characters who torment the heroine are so insufferably judgmental and nasty that I’m not quite as willing to forgive them in the end as the heroine usually is – Ain’t She Sweet comes to mind. Call Me Irresistible is no exception; the townspeople are supposed to be quirky and fiercely loyal, but I found many of them hateful. I guess it’s a side-effect of creating unnuanced characters. All I know is, I would never want to live in Wynette, Texas.

Ted is an appealing hero – I may have less invested in him than some readers, since I’ve never read Fancy Pants (I did read Lady Be Good, which featured Ted as well). He is freakishly, preternaturally perfect, and that would be super-annoying if it weren’t an actual plot point. I felt a growing anticipation as it became clear that Ted was going to absolutely lose it at some point, and when he did it was indeed enjoyable to read.

Meg is rather likable too, if familiar, in the ways I outlined above. I couldn’t help but root for her even as I realized that she didn’t have that much of an excuse for having been an underachiever and essentially a moocher for all those years – no deep, dark secrets or hidden traumas. She just felt she couldn’t compete with her brilliant family so she chose not to try.

Ted and Meg find themselves pursued by a father-daughter duo – Spence and Sunny Skipjack. Skipjack is an appliance mogul who Ted is courting as an investor in a state-of-the-art golf course and resort that he wants to build in Wynette. The project is badly needed to boost Wynette’s sagging economy. I liked the way that Meg’s environmental concerns about the golf course were addressed – the issue wasn’t just shunted aside or played as a culture-clash joke. Spence is all puffed-up rich guy with a fragile ego, and Sunny is terrifyingly Type A. They provide convenient obstacles in the growing attraction between our hero and heroine.

So, what to grade Call Me Irresistible? I’ve never been able to come up with a perfect grading system – when I try to grade intellectually, I find the grade often doesn’t feel right – it doesn’t reflect how I really felt about the book, which is what’s important to me, anyway. Despite this book’s flaws, I enjoyed it. Rather a lot, actually. So my grade is a B+.

→ Jennie
Previous article: REVIEW (actually more of a summary) of The Fever Series by Karen Marie Moning
Next Post: REVIEW: Taken to the Limit by Nico Rosso