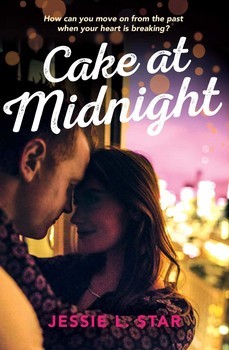 Giovanna, Zoë and Declan have always been a trio – their fierce friendship has seen them through every heartbreak and hardship and helped pave the way to brighter futures. Gio is a passionate baker of cakes, pastries and all things delicious, Zoë a take-no-prisoners beauty, and Declan an ambitious businessman on the way up.

Best friends forever, Gio thinks – until Gio’s lifelong crush on Declan is exposed, leaving her humiliated, and Gio realises she needs to cut him loose to get over him once and for all.

Enter Theo, Gio’s neighbour … She’s never met anyone like him before. He doesn’t talk much, but he’s kind, he’s sexy, he’s generous and he’s often awake in the middle of the night, like Gio. Theo has a sweet tooth and a mysterious history and Gio can’t seem to stay away.

Thanks to the power of sleepless nights and chocolate cake, Gio thinks she’s finally over Declan, but then his whole world turns upside down. Gio knows she can’t desert Declan in his time of need, but how can she explain a lifetime of love to Theo?

Letting go of the past isn’t so easy when your heart is breaking.

My friend Kat from Book Thingo told me I should read this book and I’m glad she did. (Of course, it wasn’t a hard sell because anyone who knows me knows I have a thing for cake.)

The blurb is a little misleading in that it is suggestive of a love triangle but there isn’t one. Declan and Giovanna are and always have been, friends. Giovanna (I’m calling her that because Theo does and I’m team Theo all the way) had a crush on Dec since their teen years and never put it away even after Declan said he didn’t see her that way. She was always hoping Dec would change his mind. While she didn’t exactly stop living her life waiting for him, she also wasn’t committed to the concept that they would only ever be friends. Zoë, their other mutual friend, told Giovanna repeatedly that Declan used her crush to take shameless advantage of her. And he did. Declan was a bit of a dick actually. For the most part, he made a poor showing in the book. However, he was more than just a douchebag too.

Giovanna is endlessly loyal. When her beloved Aunt Aggie died, Zoë was overseas and it was Declan who sat outside her door “keeping her company” for days to help her get through it. Giovanna doesn’t forget that when it truly counted, Dec was there for her.

The trio have been friends for a very long time. Giovanna had a happy and loving 2-parent childhood. Declan and Zoë did not. Dec’s father is an alcoholic who abused Dec’s mother (none of this happens on the page but it is referenced); Zoë‘s mother is a drug addict. Both have complicated relationships with their parents. It’s not as simple as hating them or cutting ties. Dec and Zoë hung out with Giovanna’s family and especially with Aunt Aggie. Giovanna has always known she is the more privileged of the three from that perspective and, when it comes to Dec in particular, this makes her far more prone to make excuses for him.

When the story begins, Giovanna thinks she might finally have her chance with Dec. He’s invited her to be his plus-one at a work function. When she overhears him referring to her as the “last resort” she is crushed and realises that something has to change.

Theo McKillop lives across the hall from Giovanna (who inherited Aunt Aggie’s studio apartment after her death – this is the only way Giovanna, an apprentice pastry chef could afford to live there) and they have been nodding to each other in somewhat stilted (from his side)  and friendly (from her side) acknowledgement since he moved into the building a couple of months earlier. She and her friends know him as “the Nod Next Door”.

She is surprised to find that Theo and Declan work in the same high class mergers and acquisitions/finance business – and that they dislike each other quite a bit.

After Giovanna overhears Dec dissing her, it is Theo who walks her home. And thus begins a friendship which gradually morphs into more.

Giovanna quits Declan cold turkey. 30 days with no contact to get her head straight and re-calibrate him to the friend zone because she can’t let herself keep getting hurt by him and she can’t live her life waiting and hoping. And it’s hard because he’s always been there for her and she doesn’t really know what will happen when the 30 days are up.

Theo is quiet, contained, reserved. Quite a few things about him resonated with me actually. He’s not one to force his attention on anyone. He prefers to stay in the background. He has good reason for his preference (more on that later).

Theo likes cake and is often up late at night working. Giovanna can’t sleep and finds hanging at Theo’s place in the “witching hours” calm and soothing. Sometimes she brings cake. Sometimes she reads a boring book to try and put herself into sleep mode. Sometimes, she practices making sugar paste flowers.

Theo is similarly soothed by Giovanna although she is not by nature a quiet soothing person. She’s not loud and boisterous either exactly. She’s refreshingly open and honest and doesn’t play games. That is something of a novelty in Theo’s life. He likes knowing that with Giovanna what he sees is what he gets. She can make him smile. Even laugh on occasion.

Like Zoë and Declan, Theo has had a difficult family life himself. He was the son of a notorious photographer and his famous nude model/muse. His sister is an artist as well. When he was six years old, his father took a photo of him naked with a toy plane, which became famous/infamous and Theo has been trying to live it down ever since. (There’s an extra ick factor about the photo too now that I think about it but I’ll let readers discover that for themselves.) There’s an interesting issues raised – without necessarily drawing any firm conclusions – about the difference between art and pornography, about consent and notoriety. The narrative lands in sympathy for Theo. I know I did.

Giovanna offers to attend the opening of Theo’s sister’s latest exhibit as a kind of buffer/support person for him. It marks a turning point in their relationship.

As I watched, Theo pressed an inconspicuous button on one of the grey walls, prompting a discordant jangle, the Leventises apparently ‘edgy’ in all things, including their doorbell chime.

It was weird to me that he rang the doorbell rather than just entering as I would my family home, but as a sheet of reflective glass in front of us swung silently open, my baseline for weird was  suddenly and dramatically lifted. A three-metre-high print of that first, most famous naked photograph Harvey Leventis née Apperston had taken of Philomena was hung on the opposite wall. My eyes were on a direct level with the juncture of her spread thighs, and the intimacy of the image, and the area my gaze fell on in particular, felt like a punch to the face.

Theo has precious few people in his life who think about his feelings, desires, needs. In some ways, he felt a little too tortured because apart from his fabulous assistant, Ari, there was pretty much only Giovanna who treated him fairly.

Theo is not far away from the breakup of a long term relationship (he had been engaged). He’s in no place for a committed romance with Giovanna. She is still sorting herself out about Declan. So they decide on a “modern relationship” with no strings. (Yeah, that always works in romance.)

The blurb hints at something happening with Declan and that bringing matters to a head for Giovanna and Theo. And it does. When Declan is back in Giovanna’s life (as a friend and only a friend) is there a place for Theo? Was he just a placeholder? Theo is not used to being valued for himself. He is used to being betrayed, forgotten or discarded as inconvenient. It was no wonder he reacted as he did.

Nonetheless, Theo is also a genuinely good guy. He doesn’t act like a dick. When Giovanna needs him, he is there. But now Declan is back in the picture she doesn’t need him anymore, right?

There is a swoony happy ending in which I completely believed. I loved the way Giovanna grew over the course of the book and the various ways she made positive changes in her life. I was happy to see Theo had a person in his corner who would defend him as fiercely as Giovanna would. They make a formidable pair. Also, Theo does the dishes. Every. Time. (I have some experience with such a wonder and the joy of it cannot be discounted.)

The friendship between Zoë Declan and Giovanna is complicated and sometimes messy and reflected the reality of long-standing friendships. Declan started off the book as mostly a dickhead but he did manage to redeem himself by the end. I at no stage wanted him and Giovanna together romantically but I was satisfied that they had worked out a much more balanced relationship going forward, one of inestimable value to each of them and so worth preserving.

While the city the book is set in is not specified, it would most likely be Sydney given that is the finance capital of Australia. Or, possibly Melbourne I guess. There’s a definite east coast vibe to the story and a delightful Australian flavour. I don’t think that non-Australians would find it too jingoistic either. But there are useful insights for those who are interested in Aussie culture.

Along with the colour someone liked their tea, knowing the amount of Vegemite your friend liked on their toast was the most perfect example of mateship Australia had to offer.

I sometimes thought Giovanna was too hard on herself, too quick to blame herself for things going wrong, to put herself down. But over the course of the book she grew in confidence here as well so I gave it a pass for the most part.

There was no way I could look like anything approaching my best after the day I’d had, but Theo was as close to my face as it was possible to be, and he still liked it. There was really no other option than to kiss him again.

On the heat scale, Cake at Midnight falls into the sensual but not super-explicit range, with only a few intimate scenes but the romance is there, in the words and the subtext, in Theo’s behaviour to Giovanna, which is always careful and respectful, always caring. There was plenty of intimacy within the pages to satisfy me.

I’d love to see the movie. Netflix should get right on that.