I admit I went into your debut novel not knowing much about it. I knew it was a YA. I had an idea about the basic set-up: a girl dies in a car accident and is brought back to life by a classmate. This somehow leads into a race against the clock to save the world which is about to be destroyed. Even the backcover blurb left me with more questions than answers. All these things piqued my interest enough to give your novel a try. It’s a decision I don’t regret. 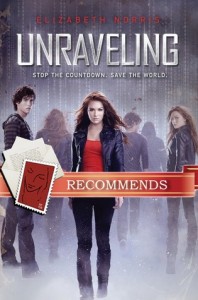 It’s the last days of summer before junior year, and Janelle Tenner is spending them as she normally would. She’s lifeguarding at the beach because if there’s one thing she excells at, it’s swimming. She has a new boyfriend and is excited about it — but she could do without the accompanying drama involving his ex-girlfriend.

Then she’s hit by a truck. It’s exactly like the stories say — she sees a bright light and scenes from her life flash before her eyes. Janelle knows she’s dying. But inexplicably, she’s brought back from the dead to find one of the loner boys from her high school, Ben Michaels, leaning over her. Janelle can’t explain why but just like she knew she’d died, she knew Ben somehow brought her back to life.

Even though Ben hangs out with the stoners at her high school, Janelle is curious. She tries to find out more about him — especially how he could have possibly healed her fatal injuries. At the same time, Janelle discovers her FBI agent father is looking into her accident and that it’s somehow connected to a major case he’s currently working on.

Janelle can’t help herself and snoops into her father’s files. What she finds leads her to believe that the FBI has discovered a bioweapon capable of unleashing a deadly virus. But once she discovers the secret behind Ben’s mysterious ability, Janelle learns that the bomb in FBI custody is something much, much worse.

Unraveling is what you get when you mix 24, Veronica Mars, and X-Files. The fast pace and countdown conceit is reminiscent of 24. Janelle Tenner reminds me of Veronica Mars in many ways — she’s the daughter of a law enforcement official and she’s clever and likes putting together cases. There’s also that incident at a party involving a roofie. As for the X-Files part, there’s a lot of weirdness taking place in the first half of the book. Corpses being found of people with severe radiation burns. The truck that hit Janelle is a make and model no one has heard of. And of course there’s Ben, who can bring people back from the dead.

It sounds like a lot but I thought the book made the various elements work. I admit I made the mistake of assuming this was going to be a paranormal novel. I suppose it was the part where Ben healed Janelle. I tend to associate that with paranormals and fantasies. But it’s not, and I don’t want other readers to go in with that expectation. Instead it’s a soft SF thriller. I call it soft SF because the science is not really delved into or explored as much as you’d find in the harder SF titles. I don’t mind this because I prefer soft SF to hard but readers who like their science fiction hard and technical will be dissatisfied. This is especially true in the second half of the book, after we discover what the deal with Ben, the countdown, and the bomb is.

This is one of those rare cases where I believed the instant love between Janelle and Ben. Janelle is drawn to him because he saved her life. It’s reasonable to expect her to be curious about him and his ability. When she discovers that there’s more than meets the eye, I found it easy to believe she’d fall in love with him. I also thought Ben’s attraction to Janelle was believable as well — harder to accomplish since in the hands of another author, I might have considered his feelings creepy considering the reason why he’s drawn to her and has always been drawn to her. But as with Janelle’s fascination with Ben, I think it makes for someone to be drawn to the person who saved their life.

I liked the depiction of Janelle’s home life. It has its good points, but it’s not perfect by any stretch of the imagination. She loves her FBI agent father but there’s a deep thread of resentment there because he’s never home. This wouldn’t be as big an issue if it weren’t for the fact that her mother is mentally ill and not even remotely functional. In effect, Janelle is left with the responsibility of taking care of her mother and also raising her younger brother. There’s a particularly poignant scene in the novel where Janelle realizes that she’s essentially her brother’s maternal figure so losing her would hit him far harder than losing either of his true parents. It’s a sad truth but a real one.

It was nice to see that Janelle’s friendships weren’t all sunshine and roses or doom and gloom. A lot of the time, it’s either one extreme or the other. Alex is her best friend and they help each other out all the time, but they have their disagreements. Ben’s best friend cannot stand Janelle, but he’s willing to put up with her for Ben’s sake. Janelle’s relationship with her former best friend is a mess and illustrates that sometimes you can’t find it in yourself to forgive. I think platonic relationships can be especially hard to depict in a nuanced fashion so I liked that we saw many different variations.

On the other hand, I would have liked for there to be more female characters that were on Janelle’s side. There’s her ex-best friend. There’s her current boyfriend ex-girlfriend. There’s her mother. These women were not there to support to Janelle and in many ways, were there to cause her more problems. With the focus on her FBI father, her father’s partner, Ben and his friends, and her best friend, it would have nice to have other female characters who didn’t fall into that category.

I can understand why some readers would find this book to be jumbled and unfocused. There’s a lot going on, and I don’t disagree that the narrative could be streamlined. I didn’t mind the way it was told, but I can see why some readers would be irritated. I will say that if you enjoyed Kate Elliott’s Cold Magic and the way that narrative was told, you will probably not mind Unraveling’s execution.

There are a few other quibbles. There’s an event that happens midway through the book. When it becomes obvious who the potential suspects are, the perpetrator ends up being painfully obvious. Alex, Janelle’s best friend, does something at the end that struck me as out of character. It seemed more like he did it because the plot required that he do it, not because it was something his character would do. The thread involving Janelle’s former best friend and her current boyfriend’s ex just trails off into nothingness. For that matter, her current boyfriend vanishes into obscurity after Janelle decides their relationship isn’t working out and that Ben is worth pursuing instead.

All that said, I did enjoy Unraveling and devoured it. My ARC is almost 450 pages long and I didn’t think the book read like it at all. It was enjoyable and I hope that more SF thrillers along this vein are soon to follow in the genre. Word of warning to readers though: while I thought the ending was appropriate and fitting, there’s a cliffhanger regarding the romantic plot. You’ll know what I mean if you read the book. B+