Those who read Dear Author regularly know that I have been on a billionaire kick for quite some time. A while ago, I read and recommended Rush, the first in your Breathless trilogy. I’m pleased to say that book three in the trilogy, Burn, worked just as well for me. 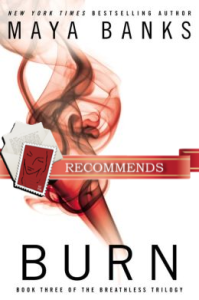 Ash McIntyre is widely considered to be one of the wealthiest men on the planet. Along with his two best friends, Gabe and Jace, they own a hotel conglomerate that employs thousands and makes them millions. Up until now, Ash and Jace have always shared women, seducing them together, sleeping with them together, and leaving them together. But in the second book in the trilogy, Fever, Jace met the love of his life, Bethany, and is now officially off the market. With Gabe in the midst of planning his wedding, and Jace head over heels in love, Ash is at loose ends. He’s always been a free agent, never committing to one woman, but he’s now odd man out from his friends and their women. Ash is also estranged from his family, who are clinging social climbers who expect his total obedience to their wishes. Ash sees them infrequently, but they always manage to get under his skin. Generally, he avoids them and relies on his best friends for support and thinks of them as his family.

One day, while in the park, Ash sees a beautiful woman sketching on a notepad. He sees that she’s wearing a necklace that is far too expensive for the other clothes she has on, and immediately surmises that she’s wearing a collar, but not one that is all that suited to her personality. The woman is Josie, a local artist. Ash’s attraction is immediate, and he’s even more intrigued when he finds that she was sketching him. But no amount of charm will entice Josie to even have a cup of coffee with him. Ash realizes he is going to have to do some quick scrambling to find out more about Josie, who shuts him down completely. He discovers that she is a struggling artist. He knows she’s struggling because he has his man buy some jewelry she’s pawned. Then he discovers that her work is shown at a local gallery and decides to buy all of it. When Josie returns to the pawn shop to buy back her jewelry, she’s heartbroken to know it’s gone. It was all she had left of her mother and grandmother. But when she finds out that Ash has bought it, and he’s willing to return it to her, if she’ll only have dinner with him, she reluctantly agrees. When he sees that Josie is no longer wearing a collar, and discovers that it’s because she realized that the collar didn’t mean the same thing to her and her Dom, he immediately proposes that she become his submissive. He lays out for her exactly what it will entail, and she says she’ll need to think about it, and get back to him.

A week later, Josie still hasn’t gotten back to Ash and he’s going a bit out of his mind. When he discovers that Josie’s former Dom has beaten her for ending their relationship, his protective instincts go into overdrive.  He moves Josie into his home and takes care of her as she heals from the beating. Once she’s recovered, they begin a sexual relationship that involves some light D/s behaviors. And when Ash collars her, Josie is delighted. She has everything that she wants. But then she discovers that Ash has been keeping secrets from her, it makes her question his motive for everything. Will Ash be honest with Josie? And how can she ever forgive him for betraying her trust?

Now look, I know that this book requires a very specific suspension of disbelief, AND it requires the reader to forgive some relatively stalkerish behavior by the hero. And I also get that it’s not going to work for everyone. But man, I’m such a sucker for a hero who is solely focused on taking care of the heroine. I love the Caregiving Alpha trope more than any other. And Ash? Total caregiver. He can also be bossy, dominant and overbearing, which clearly will not work for some readers. But for me, his intent was so clear from the start, and I completely bought his love for Josie, and more, I bought their visceral connection to each other.

I’ve also always admired that your heroines always have girlfriends. In this case, the women who are with his best friends and their friends. There is an extended girls night out that I got a kick out of reading, but more, I liked that the women really supported each other in their own relationships and in the ones that they have with the men.

The story itself is tightly written and features some extremely tender sex scenes that I really enjoyed. While this book is not going to be for everyone, I truly enjoyed every moment and am happy to recommend it to reader who enjoy a dominant yet caregiving alpha hero. Final grade: B+