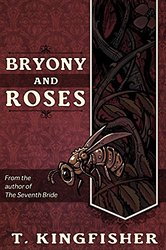 Bryony and her sisters have come down in the world. Their merchant father died trying to reclaim his fortune and left them to eke out a living in a village far from their home in the city.

But when Bryony is caught in a snowstorm and takes refuge in an abandoned manor, she stumbles into a house full of dark enchantments. Is the Beast that lives there her captor, or a fellow prisoner? Is the house her enemy or her ally? And why are roses blooming out of season in the courtyard?

Armed only with gardening shears and her wits, Bryony must untangle the secrets of the house before she—or the Beast—are swallowed by them.

I first learned about this book at the File 770 blog. Some commenters thought that the story was worthy of a Hugo nomination, and it seemed to be a retelling of one of my favorite fairy tales: “Beauty and the Beast”. This year will be the first time for me to participate in Hugo nominations (last year was first time I voted), so of course I wanted to check this book out.

To make a long story short, as far as retellings go I found it exceptional – it is a well written story which is familiar, it had several fascinating twists on the old tale, and the characters were lovely. As the blurb tells you, in this version there is no father anymore – dear dad died (partially due to his own stupidity I regret to say) and the three girls (who are young women now) were left to take care of themselves. They did a pretty good job, I thought, considering the change in their circumstances from wealth to poverty.

Bryony is a dedicated gardener. She works hard on her garden, it grows a lot of things that help them survive, she considers plants her friends, and in many ways her hobby/profession determines her outlook on life. When she stumbles upon an enchanted house, which can make almost anything a traveler needs magically appear, she picks up a rose and is thinking about taking it. Then the Beast appears and tells her that she can say goodbye, but she has to come back within a week or the house will come after her.

Amusingly, dedicated gardener that she is, Bryony does not really care for roses much.

“What do you know about roses?”

Bryony exhaled. “They’re a lot more trouble than they worth.”

A strange sound came from the Beast, and his massive shoulders shook. It took her a moment to realize that he was laughing.

“I mean it,” Bryony said, nettled. “They get black spot and mildew and cankers and rust. I don’t know why anyone bothers with fancy types. They smell nice, sure, but they take ten times as much work as anything else in the garden. I prefer sages. Nothing bothers a sage.”

“Don’t talk to me about rutabagas,” said Bryony grimly. She wondered if she could towel herself off with one of the napkins on the table. “Do you plan to keep me here talking, er, my lord?” She wasn’t sure what to call him. My lord seemed safest.”

“I am afraid,” said the Beast, turning back toward her, “that I plan to keep you here permanently.”

Bryony stared at him fixedly, focusing on the bright yellow eyes. Her mind was numb.

“Because of a rose?” she forced out.

“Yes,” said the Beast, “though not quite the way you think.”

She put her hands to her face and gave a strangled laugh. “Imagine if I’d nicked the silverware!”

“Would you like to nick the silverware? We have a great deal of it.”

Bryony is not happy about what she calls her kidnapping, but she is the kind of person who will not just surrender to circumstances. She may have to go back to Beast, but almost right away she starts thinking about how she could escape.

Very quickly, though, she realizes that Beast is in trouble, and he cannot tell her the complete story of how he and House ended up in the situation they did. Even when he tries to hint, it is clear that something evil literally prevents him from talking, can hurt him, etc. Bryony does want to escape, yes, but the more she gets to know Beast, the more she wants to solve the mystery and help him out, whatever it is he needs help with.

And the more they interact, the easier it is for Bryony to deal with Beast on the day to day basis.

“Occasionally, she drank a second glass of wine in the evenings, which made her feel rather giddy and amused, and which one night led to her poking the Beast with one bare toe when she thought he wasn’t looking up from his book fast enough.

(A week ago, the notion of touching the Beast voluntarily would have made her tremble, but there was something deeply unthreatening about him when he was reading. He had to fold himself into the chair for one thing. For another, he was desperately near-sighted and had to hold the book a few inches past the end of his muzzle when reading. Apparently House could not provide adequate reading glasses.)

He looked at her toe. She waved it threateningly. “You’re not listening. This is a great line.”

“You’re poking me,” he said mildly.

“You’re lucky I don’t come over and hit you with a footstool. What can you possibly be reading that has you so engrossed?”

“A treatise on the subject of aetherometrics.”

She scowled. “You made that up.” She threatened him with a toe.”

I liked Bryony. She is a hard-working and very practical, down to earth young woman. She is funny, in fact she thinks that both her greatest asset and her greatest sin is that her first reaction to stressful circumstances is to laugh about it. She even manages to bring some of her plants to the House and make her own garden there. I liked Beast a lot too, and I liked them together, and I hope you can see why from the excerpt I quoted above.

I said before that this book is definitely a retelling, so the general framework of the familiar story is very recognizable; however the author also made the story her own and added some twists which made complete sense to me. I wish I could say more about them, but I do not want to give away spoilers, so I will just say that I highly recommend this one if you like fairy tales retellings with great characters.