REVIEW: Brothers of the Wild North Sea by Harper Fox

His deadliest enemy will become his heart’s desire.

Caius doesn’t feel like much of a Christian. He loves his life of learning as a monk in the far-flung stronghold of Fara, but the hot warrior blood of his chieftain father flows in his veins. Heat soothed only in the arms of his sweet-natured friend and lover, Leof.

When Leof is killed during a Viking raid, Cai’s grieving heart thirsts for vengeance—and he has his chance with Fenrir, a wounded young Viking warrior left for dead. But instead of reaching for a weapon, Cai finds himself defying his abbot’s orders and using his healing skills to save Fen’s life.

At first, Fen repays Cai’s kindness by attacking every Christian within reach. But as time passes, Cai’s persistent goodness touches his heart. And Cai, who had thought he would never love again, feels the stirring of a profound new attraction.

Yet old loyalties call Fen back to his tribe and a relentless quest to find the ancient secret of Fara—a powerful talisman that could render the Vikings indestructible, and tear the two lovers’ bonds beyond healing.

Warning: Contains battles, bloodshed, explicit M/M sex, and the proper Latin term for what lies beneath those cassocks.

I saw the hints of “from enemies to lovers” , and I can never get enough of that trope, and I love historicals, so I was very happy to grab this book  for the review. I was a little afraid of excessive angst (I love the writing style but some of your books had been too much for me) but now that I’ve finished I think that I would not characterize this book as a very angsty one. I mean, sure the characters here are going through some horrible things, but they do not have time to spend to sit down and do internal monologues about how bad their life is. They have their moments, but it did not seem manufactured to me and I did not feel that the situations they are angsting about could be resolved by them sitting down and listening to each other in five minutes’ conversation. The book is dark and as the blurb states, it has bloodshed and deaths, but I felt that the book was dark because life was dark and I was surprised by how Fox also managed to put in some lighter moments. I cannot talk much about the authenticity of the settings because I do not know much about that period in history (the first chapter starts in year 687), it did feel believable for the most part (see my comments at the end), but besides that I would not know. 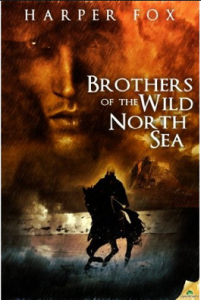 A lot of this book was centered on religion, specifically what it means to be and behave as a true servant of God. This is not surprising since monks are featured heavily in the story and Cai is a monk. But we see how different people – abbots and monks – understand differently their role and God’s role in people’s lives. Cai is a monk primarily because he wanted to come and learn things which he could not learn anywhere else;  he is also a healer and a fighter. Initially I  thought that the book aimed to talk about religion and its place in the people’s hearts and in the society in general rather than about specific religion – paganism, early Christianity, Vikings’ religion were entwined too much in the book for me to decide that the author prefers one over another.

The religious themes were done very elegantly, as a setting for romance, but I thought it went more in depth than just to be used a setting.  If you do not like the religious themes of any kind, I do not believe that this is a book for you. For me it was not a problem at all because I enjoy the books that play with religious themes, come up with interesting made- up religions, or give new twists to the existing ones, as long as the books do not preach at me. Up until the end, I did not feel that the book was preachy at all. The event at the end made me wonder whether I was wrong but I still enjoyed the book overall, although it was definitely an eye rolling moment.

For the most part the romance was wonderful, but again please keep in mind that I may be a little biased – I love the initial set up when the men are enemies and may consciously or subconsciously forgive a little more as long as I am overall pleased with the development of the relationship.  I thought it was really well done here. Neither Cai nor Fen instantly forgot about the fact that they were initially enemies and there is a blood between them, so they do not magically fell in love and forget about everything. Cai’s conflict between his compassion and his desire for revenge seemed very real to me, and the fact that Fen did not go the route of automatic gratitude to Cai felt even more real. When the relationship is described with the sentences like this one, you just want to stop and reread over and over again:

“Blindly Cai put out a hand. Fen took it immediately this time. “No. You did not let me drown, did you? I like to lie with you. I think you are a dangerous, bloodthirsty nutcase, but … I see in colour again when I am with you.”

“Cai didn’t know how Fen’s presence had made these things possible, but he felt the Viking’s power like his own, like sunlight”

I also liked how much both main characters grow throughout the story – again, they do not become completely different people, but they certainly absorbed the lessons life threw at them and learned from those lessons, as well as from each other. I wondered whether some changes in Fen’s character were a bit anachronistic. I will not say more for  fear of spoilers, and I totally understand that it was needed for the romance to have a happy ending, but I was still wondering about that. However as a romance lover I am not complaining much – anachronistic or not the ending between the main characters satisfied me.  B+