Your last few books have had a sort of a madcap adventure feel to them and so “Bring Him Home” is a change in tone and pace. It deals with grief and recovery and discovery and relies less on external conflict and more on the internal changes that the leads experience. 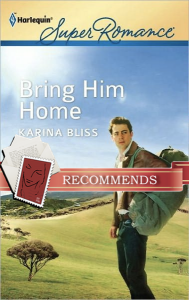 Nathan Wyatt found a family in his SAS brothers but when their convoy was hit in an ambush, one of the men that held the group together becomes mortally injured. Nate has the choice of staying with his best friend, Steve, and saving Ross. Steve orders him to save Ross and leave him. Nate knows that this is the only genuine choice he has. He also knows he has the choice of allowing Steve to burn to death, trapped under the flames of a burning Humvee, or to provide his best friend relief. Nate does the right thing, both times, but his actions and the war scarred him and after he is discharged, Nate abandons his friends and his makeshift family which included Steve’s wife, Claire, their son, and everyone else important to him.

Eighteen months later Claire tracks him down in Hollywood where Nate is serving as a bodyguard to a rock star (the brother of the hero in What the Librarian Did). Nate and Steve and Claire had formed a family trust and now with Steve dead and Nate unreachable halfway around the world, Claire needs Nate to sign papers to revert all the property of the trust into her name. She wants to turn the dilapidated fishing boat that Nate and she went halfsies on into a charter boat business. Claire needs Nate to pay attention to their combined business matters so she can move on with her life. Nate is too busy getting “comfortably numb.”

What makes this a different kind of friends to lovers book is that neither Nate nor Claire had feelings for each other before Steve’s death. Nate looked at Claire as a true friend, but most importantly, Steve’s wife. For Claire, Nate was Steve’s brother in arms. We get a look at Claire’s past relationship with Steve. One of my favorite scenes in the book was when Claire was sharing with Jules, the fiancé of one of the members of Nate’s team that had also died in the same ambush, that Steve and Claire had been on the brink of divorce but that a letter from Steve had saved it. Claire admitted that they both wanted the marriage to be saved but that the letter was a turning point. It turned out that the letter was written by committee of Steve’s team members. They were all single and very invested in Steve’s marriage and the success of that marriage.

Claire returned, carrying a sheet of handwritten paper in a plastic sleeve. “I cried over this so much I had to protect it.” Narrowing her eyes, she thrust it across the table at Nate. “Give me an example.”

Nervously Nate glanced again at Jules and then down at the page, cursing that he’d ever raised the subject. Would this make things better or worse? He was a guy, how the hell would he know? He cleared his throat. “Okay, Steve would start with something like, ‘Without you, my life would be crap.’ We’d workshop that into…” Nate found the quote with his finger “‘—you make my life worth living.’ Trying to put a positive spin on a neg- ative statement,” he added, risking a glance at Claire.

Her expression, as she eyeballed him over the edge of the champagne flute, gave nothing away. “Lee, being our romantic, suggested some of the poetic stuff… changing ‘wife’ to ‘soul mate,’ for example.”

Claire exchanged glances with Jules but made no comment.

Nate stared at the letter, fighting that male sense of helplessness that told him nothing he did now would be right. “Okay, this line, ‘We have so much fun, in bed and out of it.’ That’s all Steve’s…except for the ‘out of it’ part. That change was group consensus—we thought it might look like Steve was being shallow.” Nate told himself to shut up now, but the continuing stony silence only increased his verbal diarrhea. “The marriage vow thing, for better or worse. I think Steve wanted to write about things having to get much worse before he gave up….” Desperately he scanned the page. “That sorta morphed into, ‘No matter what, I’m committed to you for the rest of our lives.’”

Nate could see them all now, four bearded, dust-covered young men agonizing over this damn thing while Steve paced camp, occasionally bursting out with, “It’s not frickin’ right yet…. It’s got to be right.”

A lump in his throat stopped him. He looked up. Claire had her head bowed, so did Jules. Oh, shit. Claire’s shoulders were shaking. “You’re upset,” he said helplessly.

A hoot escaped her…a hoot? She lifted her face and there were tears in her eyes. “Th-th-that’s hilarious!” The two women collapsed in paroxysms of laughter.

Nate stared at them in amazement.

“Right down to licking the pencil,” Jules managed to say, sending Claire into whoops again.

“You’re right, it’s beautiful.” With a last giggle, Claire wiped her eyes dry with a napkin. “Steve was so hopeless at this kind of stuff, and for him to do this, to lay it on the line in front of you guys…and for you all to agonize over it…” She leaned over and hugged him. “Nate, it’s sweet and funny and, well, thank you.”

When Nate discovers that Claire holds strong resentment toward Steve for constantly signing up for new tours, he makes it his mission to show Claire how much Steve loved her. As the Nate and Claire remember Steve, they help each other get over their grief and find space in their hearts for something new. Watching them both discover that newness was engaging. Nate becomes grumpy at other men finding Claire attractive, something he tells himself is a holdover of his protectiveness toward Steve. Claire realizes what other women around her acknowledge – that Nate is one very sexy guy whose endearing gruffness masques a tender heart and whose commitment to a cause or a person is never wavering. The biggest problem I had was the ending. The last few lines caused me some confusion and I wished for an epilogue. B+

P.S. That cover is terrible. It looks like some teenage vagabond coming home and not a sexy former SAS now turned bodyguard to the stars.