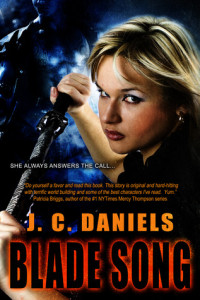 I have grown more and more cautious in my approach to new (to me) urban fantasy series. I love the genre with a fierceness that sometimes surprises me, but recently I’ve noticed it’s becoming harder and harder for new heroines and worlds to live up to my favorites. Kate Daniels and Mercy Thompson are at the top of the list, for what it’s worth. It is a silly, to say nothing of unjust, way to look at it, I know. But there it is. I read a couple of your romantic suspense novels (written as Shiloh Walker) awhile back and enjoyed them just fine, so when I realized the same author also wrote urban fantasy under a different name, I decided it sounded like just the thing for fall. It didn’t hurt that the protagonist was an assassin half-breed. I have something of a weak spot for reluctant rogues. Also gleeful rogues. Really just rogues in general. And I have to say, Kit clawed her way to the top of my list within moments of meeting her.

Most days Kit Colbana can be found holding down the fort of her somewhat dilapidated private investigations agency on the rougher side of East Orlando. Half human, half aneira, Kit is descended from a mystical race of female warriors. Trained as an assassin, she was exiled from her home as a teenager for being too slow, too stupid, too human. Happy to be free of the chains that bound her, Kit blew from place to place until a ragtag group of rebel shifters took her in and gave her a reason to stay. Now she flies solo, running her own PI operation in the neutral zone between the human and non-human sectors of Orlando. Kit takes most jobs that come her way, but she works best alone. Which is why she finds herself in such a difficult position when the notoriously insane alpha of the local cat clan sends her top enforcer to present Kit with an offer she can’t refuse. Damon Lee prowls into her office on a cloud of arrogance and ill-concealed contempt. His alpha requests Kit’s assistance tracking down her missing nephew. The job pays well and promises to boost her rep. Unfortunately, the alpha insists she take Damon with her as a bodyguard. Just in case things go south. It takes all of Kit’s paltry restraint to swallow her objections and agree to the terms. Not only does she need that money, but she has a sinister vampire with serious anger management issues breathing down her neck. And so she takes the job. Because for all Damon Lee’s imposing presence and insufferable attitude, Kit consoles herself with the knowledge that she has a few tricks up her sleeve should push come to shove.

Kit had my allegiance from the word go. She’s scrappy as they come. And her aneira “family” were not kidding around with her training. The few flashbacks she allows through the cracks were more than enough to convince me she had earned the right to be as cagey as she liked. As a result, Damon barging into her life, manhandling her like one of his subordinate cats rubbed me just as wrong as it did Kit. And so as it became clearer that he was indeed cast in the role of love interest, I worried I wouldn’t be able to get past the violence and the ego. It was such a relief to have these fears prove unfounded. Because if I’m sure of anything in this cold, hard world, it’s that Kit and Damon are one hell of a match. What initially set my teeth on edge evolved into the most entertaining (and surprisingly touching) relationship I’ve had the pleasure of reading in quite some time. These two personalities are forces to be reckoned with. This is not to say that they’re indestructible. By definition of her partial heritage, Kit is more fragile than Damon (than most of the supernatural big bads she has to deal with on a daily basis, to tell the truth). But the skills she does have are honed to an unparalleled degree. I gleefully enjoyed watching her throw her pursuers off her tail with her mad sword fighting and hidden talents. There is little of peace or joy in Kit’s life. For as long as she can remember it’s been kill or be killed. She has a solitary witch friend here, a shifter who owes her a favor there. But by and large, no one looks out for Kit but Kit. Here and there, though, the darkness is leavened by a punch of light:

The intensity in the air faded and instead of two angry shifters hovering nearby, there was only one.

He looked at me and then jerked his head as he headed outside.

There was a car waiting.

Es had said it was on loan.

It was long, lean and black, a throwback from the days of those old muscle cars and it looked like it might have been made just for him. As he leaned back against it, he stared at me with fury dancing in his eyes. “You had to do it, didn’t you?”

“Yeah.” I thought it all through one more time. Then I nodded. There wasn’t anything I would have taken back or changed. “Yeah, pretty much.”

These moments of understated humor save the reader from succumbing to the horror of Kit’s past and grim reality of her present. As does the sizzling attraction between Kit and Damon. There is little to no smooth sailing between them, and they give each a few new scars to add to the old ones. But they’re both so compelling that I, for one, couldn’t look away. The writing itself is clear and fast-paced, though the copy-editing in my copy left something to be desired. Peopled with clever witches, nightmarish vampires, wild shifters, and one half-human girl who can handle herself, this ruthless world is one I cannot wait to return to. B+