REVIEW: Between the Spark and the Burn by April Genevieve Tucholke 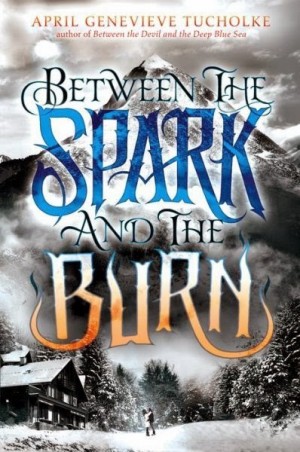 Between the Spark and the Burn is the follow-up to your debut, Between the Devil and the Deep Blue Sea, which I read and enjoyed last year. It continues the story of Violet, whose life was rocked when the Redding brothers walked into her life. I won’t summarize what happened in that book — the review’s linked right there. But I will warn new readers that because the books are tightly linked, there may be spoilers in this review. Tread carefully!

The story picks up a few months after Between the Devil and the Deep Blue Sea. Despite his promise, River still has not returned to Violet and she begins to fear the worst. Then one night, on a late night paranormal radio program, she hears rumors of weird occurrences and “devil sightings” in an isolated country town. Suspecting that it might be River–or worst, the murderous Brodie–she and Neely (the third Redding brother who stayed) go on a road trip.

They arrive, only to find that River–or Brodie–is gone. But they find clues pointing to other places the brothers may have gone. So their road trip leads them on a chase from one town to next, as they track the brothers. They always seem to be one step behind, until they catch up to River in a North Carolina island community. There, Violet learns her fears were quite founded. Now to find Brodie — except he might be closer than any of them ever suspected.

While I think Between the Spark and the Burn has the same dreamy gothic tone as its predecessor, I enjoyed this book a lot more. I’m fond of road trip stories, and this is basically a gothic monster hunter road trip story! All of my favorite things in one.

I really liked Violet in this. She loves River. She always will in some way. While I wasn’t really okay with these feelings in the previous book for reasons I explained in the linked review, I apprecated how much Violet has grown in the months between. She doesn’t trust River anymore because despite his promise not to, he’s used his powers and they’re harming people. Because of this, she refuses to let herself fall into the same trap again. He’s bad for her, she realizes it, and she makes the correct decision. Essentially, all of the misgivings I had about the first book are addressed. The screwed up relationship is presented as screwed up. It’s not presented as romantic. I loved that this happened!

I also really liked the burgeoning relationship between Violet and Neely. It’s a variation on one of my favorite tropes: Girl goes after guy… and ultimately ends up with guy’s brother/best friend instead. And while you can argue that it’s Bad Boy (River) versus Nice Boy (Neely), I didn’t view it as a love triangle for the reasons I stated above. I understand why other readers would, but by the time they catch up with River, I felt confident that Violet’s feelings for him stopped being romantic and became one more of responsibility and debt. Because of the things River did in the past, and because of the horrible things he does in this book, Violet will never feel the same way about him as she once did. She can’t.

The twist involving Finch made me gasp. It was so obvious. The signs were all there, but I was determined to believe that I was wrong. Never have I been so sad to be right! (I mean this in a good way.) Still, well done on that particular plot thread.

One thing I wish the book had more of is close female friendships. Violet’s friend, Sunshine, is absent for large stretches of the book and while Pine and Canto are introduced, the former only makes brief appearances and the latter is wrapped up in Finch. It just seemed like it was all about Violet and her relationships with the brothers. Yes, that is the premise, but it would have been a nice to see another dimension to her life.

If you imagine a Stephen King story written for the YA set in a gothic style, you’ll get this book. I think the two books together make a fabulous whole. And if you were like me, and viewed the romance in the first book with distaste, know this book will satisfy you. B+