REVIEW: Between the Sheets by Molly O’Keefe 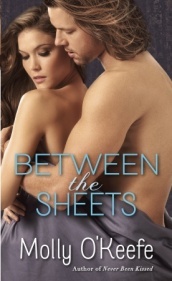 I have so many wonderful books on Mt. TBR.  It includes quite a few of your earlier books and I’m now kicking myself for not having read any of them.  The good news is that I have your backlist to look forward to.  I sank into your writing style like I was coming home. It just really worked for me and some of the word pictures you created pushed my good reading buttons.

Between the Sheets works as a stand alone with the possible exception of the epilogue.  It was only there where I felt a little lost as regards who was who.  Otherwise, this book was easy to follow – though I suppose there are mild spoilers in it regarding previous books in the Boys of Bishop series.

Shelby Monroe is a part time art teacher at the Bishop Elementary School and she runs art classes in the Art Barn – which is literally the barn outside her family farmhouse.  Her father was a preacher of the tent evangelism kind; full of fire and brimstone and an all round not-nice-guy. He couldn’t stand for anyone to succeed except him, he had to make himself feel big on the backs of others being made to feel small.  He was abusive emotionally and physically and, after a beating when Shelby was seven, Shelby basically shut down, daddy turned his hate on Shelby’s mother. Every time he heaped abuse and spite on Evie Monroe’s head, it was with a nod to Shelby that it was all her fault.  So it was a pretty toxic home life for her.

Now, daddy dearest is dead but his ghost lingers.  Evie has Alzheimer’s and Shelby struggles to cope, largely on her own. She loves her mother but tied up in it all is a lot guilt for not protecting Evie better from her father’s wrath, for not allowing herself to be a target so that Evie was the easy pickings.  Having closed herself off so well in childhood, as an adult Shelby is shut down and buttoned up.  She holds her emotions close and doesn’t let anyone in.  If no-one’s in, no-one can hurt her. That’s what her daddy taught her. Every now and then however, the pressure gets too much and she has a kind of meltdown.  The previous year, the “meltdown” manifested itself in some hot animal sex with a guy in town for a reality TV show.  He seems to have been a real piece of work and had some awful things to say about her on national television – vicious words which are immortalised on YouTube.   Shelby can’t quite decide if it’s a good thing that people mostly didn’t believe Shelby capable of animal sex or not.

Wyatt “Ty” Svenson moves in across the road from Shelby.  Their first meeting is fairly inauspicious – he is working on a vintage motorcycle in the early hours of the morning and keeping her and her mother awake and she confronts him.  What really brings them together is Casey, Ty’s son.  Five months earlier, Casey turned up in Ty’s workplace in West Memphis saying he thinks Ty is his dad.  Ty had a relationship with Casey’s mother, Vanessa, twelve years before but he hadn’t heard from her after they split up. He certainly never knew he was a father.  Vanessa wouldn’t win any mother of the year awards – she’s currently in jail for meth possession and intent to sell.  Casey was put into foster care and it was this which drove him to locate his dad.  Ty is determined to do right by Casey but he hasn’t the first idea how to be a good dad and Casey has had a difficult childhood and doesn’t really know how to be happy, how to trust that he’s safe.  Consequently he acts out at school and this puts Ty and Shelby in each other’s path.

It so happens that Shelby has one of her meltdowns around the same time Ty is also looking for some easy pleasure to blow off some steam and they start a no strings affair where the pressure can be relieved and which is a kind of time-out from the crappy things in their lives.  Ty quickly comes to want more from Shelby.  He sees her in a way no-one else perhaps ever has.  He’s intrigued by her and amazed by her in turn.  Ultimately, the conflict between them is Shelby’s fear and belief in her inability to let anyone in. She doesn’t believe she can love anyone well.  She doesn’t believe she is worthy.   Writing that now, it seems like maybe a melodramatic storyline but in the context of the book, it works.  While I was sometimes a little frustrated by Shelby, she didn’t find it easy to open up and, after years and years of practice, her default in times of stress and trouble is to shut down.  So it make sense that their relationship would stutter a bit, that there’s a kind of two steps forward/one step back dance they do.

I liked the way you write characters and can pinpoint the reality behind some things people always say – things I’ve said myself, things that have been said to me. Like this:

But instead, she said, “Thank you, Joe.”

He nodded, his lips pursed in that way that said, It sucks, but I’m on your side insofar as your side does not require any more from me than this.

Most of the sex is in the first two thirds of the book – sex is the easiest thing for Ty and Shelby to do – it is the actual relationship they find hard.  Ty because he’s never done it before and Shelby because she’s so insular.  This worked for me too because I already knew they could have successful sex – I didn’t need to read about that by the end – it was them communicating over the hard things and sharing struggles which made me believe in their HEA.  Even so, the sex which was in the book was both hot and at first, kind of removed.  Their first few encounters were purely physical and impersonal.  Then there is a gradual introduction of emotion – to the point where a simple kiss, a hug, became more intimate than naked penetrative sex.  I liked the subversion of it.

He was watching her with a wary smile, as if he just wasn’t sure what she was going to do. “You’re not very good at this, are you?” he asked.

“I thought I did all right,” she said, gesturing toward the rug and the couch as if it were the wrestling mat they’d just battled upon.

“No.” He stood. “At that,” he jerked his thumb behind him, “you’re amazing. The undisputed champ.”

Well, didn’t that just wreck her with feminine pride.

“The after part.” He shook his head. “You’ve got a shitty dismount.”

The hoot of her laugh was a surprise to both of them.

Ty won me over with his desperate love for his son, whom he wanted so much to do right by but felt clueless and powerless to actually help.  And for sticking by Shelby even when she pushed him away.

Oh, God, wasn’t that just the sterling silver truth of this man. He would help her even after she’d rejected him.

There is something so powerful about love which doesn’t depend on quid pro quo.  It was something my not-then-husband taught me when we were courting and ultimately, it was probably what made me trust him with me.  That, even if I messed up, he would still be there and he proved it so I knew it was the truth.  Sure broad shoulders and six pack are nice to look at but that solid core of love and loyalty without condition? That’s unbelievably sexy to me and worth more than abs of steel (lucky Shelby; Ty has the whole package).

I liked the way the story with Evie played out – there is no easy answer caring for someone with Alzheimer’s – it’s a struggle and a grind.  There are better days but days when it’s all too much and by the end, I could see that Shelby was sharing all of those things with Ty and that between Ty, Shelby and Casey, they were doing the very best for Evie. At the same time, I didn’t feel like Evie was there merely to be a cause of struggle for Shelby. The scenes when she had insight into what was happening were poignant and the relationship she developed with Casey was something special for both of them.

I loved the storyline with Casey.  There was a point where I wondered where things started to go too smoothly too quickly, but for the most part, I think you showed that, again, there is no easy fix to years of neglect and abuse and that time, patience and love, security and stability are the keys to success there. Ty stumbled as he tried to do the right thing and he wasn’t a perfect parent right out of the gate – something which made him more relatable I think.

I did feel that the bits with the police were perhaps a little heavy-handed and pushed the don’t-judge-a-book-by-its-cover-theme a little too far.

It was a book which needed an epilogue to show the HEA and I liked that not everything was shown as hunky-dory even as at the same time they were better than they had been.  I did get a little lost with all the other characters – there were a couple whose only appearance in the book was in the epilogue – but I suppose those who have read the earlier novels will appreciate it better than I did.

Ultimately, Shelby, Ty and Casey all found community and love and acceptance; a safe place to fall and a place to call home. I found it a delightful read which pushed many of my good book buttons.  I give Between the Sheets a B+.