I have a confession to make. I started but never finished Hot Island Nights. For some reason, the characters never quite hooked me. When I saw Best Laid Plans on sale, I felt both a little fear and excitement when starting it. Fear because the last release of yours and I weren’t getting along but excitement because I was starting out a new Sarah Mayberry and so many of them had worked for me in the past. I’m delighted to say that Best Laid Plans was another wonderful entry in the Mayberry collection of stories. 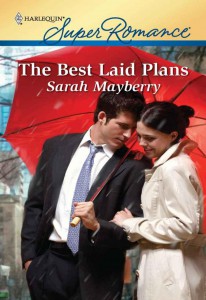 Alexandra Knight, the heroine, was relatable on the first page. Alex worked hard to become successful as a corporate lawyer but she had also wanted to have a family. Her live in boyfriend of seven years was anti-child, so anti-child that it led to their breakup. Eighteen months later, Alex runs in to her old boyfriend pushing a stroller with a four month old child. Jacob, the ex, sheepishly explains that it was an accident. But like Meg Ryan in When Harry Met Sally, Alex is fairly crushed by the appearance of Jacob so comfortable in his child care tasks when he was so adamantly against a child with her. What is worse is that Alex is thirty eight and her years of fertility are dwindling and she is alone:

And now Jacob was a father, and she was single and thirty-eight and still looking for the man she'd left Jacob to find. A man she loved who loved her and wanted to have the family that had always formed the cornerstone of her hopes and dreams.

After a sobering visit with her ob in which Alex learns that her chances of having a successful pregnancy in her early forties is ten percent and only about thirty five percent at her current age, Alex decides that she can’t wait and hope to meet a man, fall in love and have a baby the natural way. She learns, however, that she can find a sperm donor in no time. Alex knows she can be a single parent as she took care of her brain damaged mother for eight years and she has the means to support herself and a child.

Ethan Stone is Alex’s co worker and racquet ball partner on Wednesday nights. He’s swoon worthy but Alex put him firmly in the “no date” box in order to maintain a good work environment. It’s a good thing too because Ethan is a no commitment kind of guy whose had many a temporary girlfriend. What Alex and the rest of the world doesn’t know is that Ethan had wanted the family, the kids, the wife at one time; but his divorce left reeling and emotionally closed down. He was never going down the kids/wife route again but despite this, Ethan recognized his life was missing something.

Even though he'd never admit it to his brother, Ethan's social life was a lot less hectic than anyone imagined. Sleeping around had gotten old quickly after the divorce. Like drinking till you passed out and bragging about your exploits, being a man-slut was apparently something that a guy grew out of. Go figure.

When Ethan accidentally learns about Alex’s plan to get a sperm donor, he offers up a crazy plan. He’ll be the sperm donor and they can co parent. Two parents are better than one, he argues to Alex and given that they are friends and partners in the same law firm, they clearly are able to get along.

There are a couple things that I really enjoyed about this book besides Ethan and Alex and one was Ethan’s relationship with his brother. Ethan’s younger brother was happily married, had a kid and was always needling Ethan about his lonely bachelor existence. Most of the time, the two were challenging and needling each other in ways that only brothers can but when Ethan really needed the support of his brother, Derek was there with a strong shoulder. Ethan simply wasn’t up for the risk of love again. And it isn’t some simple moping. Ethan is really torn. He loves Alex but he cannot commit to her because he is afraid but it tears him up inside, at one point making him physically ill:

He pulled over to the side of the road with a screech of tires. He barely got out of the car before what little he'd eaten for dinner burned its way up the back of his throat.

He stood with his arms braced on his legs for a long moment. Then he spat into the gutter. Feeling about a million years old, he climbed back into his car.

The other thing was that I felt that this story really asked all the right questions. Ethan challenges Alex. Derek challenges Ethan. When Ethan lays out his co parenting plan to Derek, Derek fires back:

"You say there'd be no acrimony. You're kidding yourself if you think there aren't going to be moments when the two of you want to rip each other's heads off. It doesn't matter whether you're married or in a relationship or divorced or whatever, you're going to disagree about something. Raising kids is like that, and no neat little contract you guys draw up beforehand is going to make any difference to that."

"We fight. Then we have sex and make up. What are you and Alex going to do to get over the rough patches? Play a game of racquetball and exchange lawyer jokes?"

What I also liked was that we weren’t taken to the “let’s hop into bed and make the baby the natural way”. Instead, their growing sexual attraction for each other is almost an impediment to a bloodless co parenting plan. And it’s a bit suspenseful to find out if Ethan and Alex go through with the pregnancy. As the title suggests, the best laid plans always go awry. My favorite romances resonate with authenticity and Best Laid Plans is populated with characters that feel real. If I had any complaint about this book, it may have been the brevity of it. Sometimes I curse the page limitation of the category romance and this is one of those times. B+