The changeling William Wolf was introduced to readers in your earlier book, On the Edge. On your website, Mr. Andrews states in that book, William "lost Rose to Declan and did not save the day. This book [Bayou Moon] was his chance to be a hero, to get the girl. A damaged hero and a very odd girl, but still." 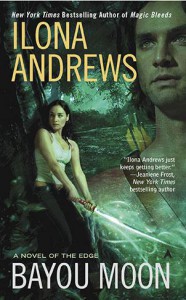 I enjoyed Bayou Moon, which takes place in the Edge, a strip of land between two dimensions, the Weird and the Broken. The Broken is our world, where there is no magic. The Weird is a magical realm, a mirror of the Broken in which two New World countries, Adrianglia and the Dukedom of Louisiana, are engaged in a cold war.

Bayou Moon begins when Nancy Virai, an Adrianglian spymaster, and her assistant/thug Erwin, arrive in the Edge to recruit William for a mission. William used to be a member of the Red Legion, an Adrianglian black ops army unit. But he was expelled from the Red Legion and adopted by the evil Lord Casshorn Sandine, who met his death in On the Edge. Since the events of that book, William, Lord Sandine, has been employed as a construction worker in the Broken and moping in his spare time.

Back in his Red Legion days, William had two encounters with a twisted, magically enhanced Dukedom of Lousiana spy named Spider. That William survived those encounters means he is the Adrianglians' best hope of defeating Spider and his covert organization of magically enhanced spies, the Hand. Spider and the other members of the Hand have infiltrated a part of the Edge which borders the Dukedom of Louisiana and is known as the Mire. Virai believes that they are searching for a magical item that could tip the balance of power between Adrianglia and the Dukedom of Lousiana, and mean all-out war.

William loathes Spider with his whole heart, since Spider is responsible for the murders of several Adrianglian changeling children (In Louisana, changelings are reviled so much that they are killed at birth, while in Adrianglia, many are abandoned by their parents and given over to the care of Hawk's Academy, the brutal orphanage where William grew up). Because he hates Spider so much, William agrees to infiltrate the Mire, learn what Spider and the Hand are seeking, capture that item, and if at all possible, kill Spider.

Meanwhile, in the Mire, Cerise Mar discovers that her parents have not returned from a ride to Sene Manor, an empty house that once belonged to Cerise's grandparents. When Cerise and two of her cousins ride to Sene, they discover that the house has been confiscated by the Sheeriles, a family with whom the Mars have a longstanding feud. The Sheeriles inform Cerise that the Hand has taken her parents, and they claim not to know the reason why.

Now Cerise and her family will have to fight the Sheeriles for Sene Manor, where there might be clues to explain the Hand's interest in Cerise's parents. But to prove that the Mars have the right to Sene, Cerise must travel to the Broken to retrieve a copy of the deed from her uncle.

Sneaking into the Mire from the Broken, William pays a man named Vern to guide him down a river to the town of Sicktree. Also on the same boat is a girl who looks like a hobo, and smells, to William's discerning nose, like a jar of moldy spaghetti sauce.

Partway through the journey, William and the girl lose Vern to a shark attack. Now the “hobo queen” is William's guide to Sicktree, and he does not trust her as far as he can throw a necromancer-controlled giant eel. But when he realizes the Hand's agents are after the girl, and that after washing off the spaghetti sauce, she smells delicious, William realizes that he has to stick close to her, and that that is exactly what he most wants to do.

For her part, Cerise, too, catches on to the fact that William is more than the spoiled blueblood he first appears to be. Unexpectedly attractive and proficient with a crossbow, William may be dangerous to Cerise's family. Can she trust him, and even if she can, should she risk her heart at a time when the lives of her family members are threatened?

Bayou Moon is darker in tone than On the Edge (One scene in particular is quite violent and not for the faint of heart) but it is still greatly entertaining.

William and Cerise seem right for each other. It was immensely enjoyable to see them begin to perceive they had met their match in the one they first dismissed as “Hobo Queen” and “Lord Bill.” As their strengths become apparent, they grow to admire each other more and more. Both are great with weapons and really respect each other's abilities in this arena. She has a huge family and he longs for family, a sense of belonging and being wanted and accepted, more than anything.

There is some delightful, laugh out loud humor in this book. I caught myself giggling and smiling several times. The novel had a terrific sense of adventure, particularly in the section of the book when William and Cerise were trying to reach Sicktree together, that reminded me of movies like “Romancing the Stone” and “Raiders of the Lost Ark.”

The worldbuilding is superb; the Mire comes alive and I felt as though I could feel the humid air and murky water, and see the creatures that inhabited this world, from the Loch Ness monster-like rolpies to the legged eels.

I did catch one major inconsistency, though. Earlier in the book, it was stated and shown that exposure to the Hand's magic makes people sick at first, but later in the story, when many characters encountered the Hand for the first time, this was not the case.

If the world was believable for the most part, so was Spider. I especially liked it when he stated that he became a monster so his fellow countrymen would not have to. It's a rationale that many have used on a slippery slope to evil.

Most of the secondary villains among the members of the Hand reminded me of the supervillains in the comic books I read as a child. On their own they were menacing, but when they gathered together for a big showdown near the end of the book, it was too much to be wholly convincing. The Sheeriles were more interesting villains and I particularly appreciated the multidimensional Lagar, who had a humanity that he denied.

The Mars (Cerise's family) were colorful and lively. They were distinct from one another and I had no trouble telling them apart and remembering who each of them was, which is impressive since there were so many of them.

William's desperate need to be loved and accepted was so intense that at times it seemed a little over-the-top, but it was understandable given how barren his childhood had been, and it made me feel for him. Cerise was so attracted to William that I wondered why the women if the Broken and the other part of the Edge hadn't been, or if they had been but William simply didn't notice because he didn't believe anyone could want him.

Cerise was a wonderful heroine, strong, intelligent and responsible. I loved that she could still be smart alecky with Williams despite all the pressure she was under, and I especially loved the way she struggled with the difficulties of leading her family. Even when she fell apart on the inside, she knew she couldn't show it on the outside, lest her authority be challenged at a crucial time.

The attraction between Cerise and William was potent and the fact that their lives were in danger made me root for them as a couple even more. I wanted them to find some happiness in the midst of all the danger, and I was glad for them when they did.

In the last third of the book, a lot of attention is given to the magical item Spider is bent on acquiring, and to the history of this thing. This came up just as things were heating up between Cerise and William, and romance-lover that I am, I wanted more focus on their relationship and less on the history of this magical item.

[spoiler]Also, for the life of me, I couldn't understand why the Hand held Cerise's father captive, and didn't just kill him outright, or torture him as leverage on Cerise's mother.[/spoiler]

The final chapter and the epilogue have a very different feel from the rest of the story, and as a result, this book isn't as cohesive as On the Edge. The last conflict that came between William and Cerise near the very end of the book felt contrived to me. There is also a plot thread that is left unresolved. To me this was on the one hand this was somewhat dissatisfying, but on the other, encouraging, since I'm hoping for more books in this series.

Though it wasn't a perfect book, Bayou Moon was highly entertaining. I look forward to the next Edge-set book, and my grade for this one is a B+.