I have been slowly working my way through your backlist titles, so when I came across the re-released, reasonably-priced digital edition of Bad Karma at the Kindle store, it shot to the top of my TBR list. I have to admit that I’m not the biggest fan of the “psychic heroine” trope, but the interesting twists in Cleo’s characterization, as well as the undecorated prose style and dark emotional landscape of the book as a whole made me a believer. 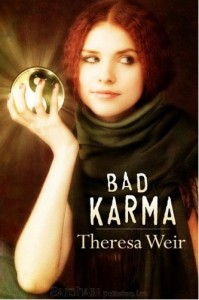 Cleo Tyler fancies herself a fake psychic whose visions have always been frighteningly real. She’s been having dreams, too, which recreate the terror of the Halloween night her fiancé was killed in the car accident that merely threw her from the car, her injuries as yet unseen. In the weeks that followed the accident, the emotional hurt over losing Jordan and their unborn baby made her a virtual prisoner in her apartment, unable to eat or function, spending every moment trying to conjure Jordan’s ghost. After being rescued by her brother, she is finally back among the living, although to say she has recovered would be a massive stretch. Still, some folks have gotten it into their head that she can solve crimes, and after her visions led to the return of a missing child in California, she has garnered a reputation. Which is how she comes to be in Egypt, Missouri, posing as a blind woman so she can keep her dog, Premonition, with her on the train, and willing to do whatever is necessary to secure the money promised for finding the town’s missing master key.

Daniel Sinclair does not believe for a second that Cleo Tyler is psychic, and despite his momentary surprise at meeting an attractive blind woman with her service dog at the train, he is determined not to be taken in by such an obvious scam. He had seen a lot in Los Angeles, before he had to come back to take care of his developmentally challenged adult brother, Beau, following his mother’s death, and there is nothing new about this woman. Daniel is certain that there is no room in Egypt for this “Queen of the Scams.”

Still, Daniel feels a slight twinge when he takes her to the town’s only motel, a disheveled dive that “was like something from a Quentin Tarantino movie.” Maybe it is the way Cleo treats Beau “as an equal,” or the way Beau takes immediately to Cleo and her dog. Or it could be her “tumbling red curls” and “big, sleepy eyes,” and compelling blend of poise and fragility. Regardless, Daniel is certain that it won’t be long before Josephine Bennett, Egypt’s chief of police, realizes that Cleo is a fraud and this whole charade will be over.

Like the other Weir books I have read, Bad Karma is deceptively simple in its prose and profoundly tortured in its emotional substance. Cleo would rather have people believe she is a fraud than deal fully with the import of her involuntary visions. At one point she explains to Daniel that “people need to believe in something…That they have control. Because the alternative, that life is random and nobody is in control, is just not acceptable.” And yet Cleo perpetually struggles to feel in control. For one thing, she’s drifting. She has a linger eating disorder that makes little besides milk palatable to her; the color orange triggers panic attacks; and the chronic dreams of that Halloween accident keep her from sleep. And once she arrives in Egypt, she is also getting visions of something bad in a farmhouse that seem to have nothing to do with the missing master key. Daniel, on the other hand, seems to have everything under control. He feels responsible for his brother; he feels responsible to protect the people of Egypt from Cleo’s fraudulent game; and, once Cleo comes into his life, he even feels responsible for her, despite his bone-deep mistrust of her motives and her character.

I don’t want to give too many plot details away, in part because a large measure of the book’s appeal is in following a number of seemingly mundane details and plot and character threads until they reveal a deeper significance. In fact, Bad Karma is very much a book about facades. Not all facades are dishonest, even as they hide something else. For example, there are the facades of the romantic and suspense elements of the story. Daniel and Cleo must be in close proximity for their attraction to grow, and this is facilitated by a number of seemingly simple devices: Beau takes care of Premonition so he won’t have to live in that awful motel; Cleo has enough at one point and leaves town, forcing Daniel to go after her and bring her back; Cleo finds herself in danger and Daniel has to assist her, etc. Then there are the superficial details that make up the suspense portion of the book: Cleo is brought into town to find the master key but instead stumbles upon something darker; characters appear to be one thing but are really another; Daniel gets reluctantly drawn into the mystery and the tension mounts as he and Cleo move closer to uncovering the truth, etc.

All of these facades work simultaneously to hide and reveal deeper truths. For example, Cleo gives the superficial impression of aloof disdain for those who believe in her abilities, while underneath she is emotionally traumatized and volatile. Still, there are layers beneath that truth, as well, a deeper strength and perceptive intelligence that have made her more survivor than victim. Daniel, beneath the surface control, has his own emotional trauma from years as a California cop and coping strategies that tend toward smoking and drinking. As much as he fancies himself caretaker of his brother, in reality Beau is more suited to that role, and not only with Daniel. And like Cleo, Daniel’s own skepticism is more a scar over a broken heart than a true cynicism, and every encounter they have picks away at them:

He pressed her down until she was lying on her back, the fog swirling around them, enveloping them. At one point, he laughed, a low sound, full of wonder and delight, that filled her head, that melded perfectly with the tone of their coming together.

Having a scar picked at is painful, though, and it makes the healing process more difficult and yet more urgent, as well. The challenge is to heal without just superficially covering up the hurt, and this process is complicated by all the ways in which the world is an insecure place, full of facades: a bucolic looking barn can hide all sorts of darkness; people leave; children are kidnapped, women are tortured and murdered. The world of this book is one in which love is not enough, but surviving without it seems impossible.

Bad Karma is not a light book, despite the wry humor that permeates the writing. Daniel and Cleo are damaged in real ways, and Cleo’s emotional injuries are especially deep and abiding. The only things that marred my enjoyment were the clichés that I never felt the narrative successfully rehabilitates, especially the use of Daniel’s brother Beau to reveal Daniel’s character and accelerate his emotional growth and the revelation of the true mystery Cleo’s visions uncover. Still, despite some of that narrative heavy-handedness, Bad Karma turned out to be good luck for me, breaking a small Romance reading slump. B+