Update: I said I bought these from WH Smith, but in checking my receipt (at the request of Maude whose email I tried to answer but it did not work – bouncing) it was actually from Waterstones. Sorry! 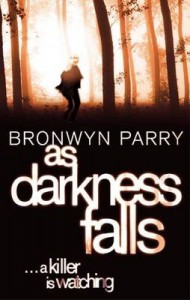 Thank you for sending me your books for review. I had remembered seeing your name around the blogosphere, but given that your books were published in Australia and I would actually have to make an effort to order them, I pushed the books out of my mind. I am a pretty lazy shopper (which is why the one click buy is so important to me). But then you decided to send the books directly to me.

I confess I hadn’t realized that they were even romantic suspense when you profferred them. I really do enjoy a good romantic suspense but it’s rare for a reader to find a good blend of the suspense and the romance. (I think I say this in every RS review, but it is true).

After I had finished reading this book and your other, Dark Country, I asked why these books weren’t published in the US. Someone said its because they are set in Australia, but I never felt like I was reading about something unfamiliar. Indeed, the location could very well have been in the Western United States given the descriptions of the land and the people, well, it just shows how universal human nature really is.

Detective Sergeant Isabelle O'Connell specialized in finding lost children, lost people, and when one of the children of her hometown, Dungirri, was kidnapped, Isabelle gladly joined the law enforcement team assembled to find her. The town and the team focused on one strange man living on the outskirts of town. Isabelle wasn’t convinced he was the culprit. When the body of the child turned up, the town’s anger crescendoed and a mob formed to bring the man to justice. Isabelle attempted to protect the man and in the town’s frenzy, the hurt Isabelle and killed this man.

Isabelle’s loss was multiple: she failed to save the child’s life, an innocent man was stoned to death, and the people she grew up with almost did her in, at the very least killing her belief in herself and others. Isabelle retreated to her home.

This story is about not only the redemption of Isabelle but that of the town as well.

She thrust her hands in her pockets, shoulders hunched. "This town was already in a bad way, well before Jess was abducted last year. It's lost half its population in the past ten years, and with the timber mill closed and most of the graziers shedding staff there's chronic unemployment. What happened last year – Jess's abduction and murder, Chalmers' death – can you imagine what that does to a community like this? The place is so traumatised it's barely functioning.'

Yes, he'd seen that today. Seen it in the people who couldn't look each other in the eye. Wives looking sideways at husbands, friends doubting friends, and no one daring to speak of the unspeakable.

I think a well crafted suspense story makes you think, not of what happens next but why. It shows you that good and evil is a much grayer area. For Isabelle, that the people that she grew up with, the people that she thought she knew, could so easily turn into monsters, was a truth she couldn’t really comprehend.

When another child is taken a year later from Dungurri, this time from a close friend, Isabelle is asked by Detective Chief Inspector Alec Goddard, from State Crime Command in Sydney to assist in finding the child. DCI Goddard is uncertain about Isabelle, thinking that a cracked detective isn’t much good to anyone but she came highly recommended by a superior of his.

Isabelle and Alec make a good team. Alec is secure enough in his own self that he doesn’t mind when Isabelle takes the lead in questioning people nor is he adverse to accepting direction. Isabelle uses her knowledge of the Dungurri people to help rule out and in suspects and each time she questions them, the knowledge of what they had tried to do to her, rumbled in the background.

We were able to see the two of them use deductive reasoning skills in weighing suspects. For instance, at one point, they debate whether the kidnapper could be a woman.

She understood his meaning. "If a woman abducts a child, there's usually an element of caring, of nurturing, involved. New clothes, toys or other gifts. Attempts to establish a relationship. But with Jess and Kasey there was . . . nothing.'

(I don’t know if this is accurate but it sounds good). The romance between Alec and Isabelle takes place over a short time and under intense stressful circumstances. Yet, it is highly believable. Alec comes to admire Isabelle a great deal and Isabelle sees someone in Alec who is not only loyal, but also strong. Further, like Isabelle, Alec had seen the worst in people. They had a shared sense of purpose.

The times in which Alec and Isabelle were intimate in the story seemed a natural progression of both their feelings and the overarching plot. It wasn’t at an odd time, in the middle of the jungle or when they should have been searching for the child. It was during times when they had done all they could during the day, interviewed, searched, investigated.

I think the villain is hinted at pretty early in the book and the suspense was more about whether Alec and Isabelle could unravel the mystery before the villain decided to kill another child. I enjoyed the police procedure aspect, thought the romance believable and well integrated; but I particularly liked the emphasis on how people are shaped by their communities, for both good and ill. B+

This is a book that was published originally in Australia and has been released in the UK. I was able to buy it from WH Smith in epub format Waterstone’s in epub format with a US credit card. Remember that there is an exchange rate difference between the listed price in pounds.