I’ve been reading your Guild Hunter series since its inception with Angel’s Blood. Recently I finished the ninth full-length novel, Archangel’s Heart. 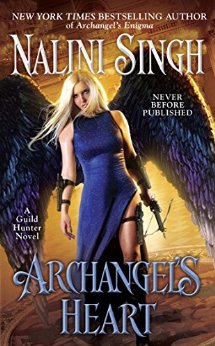 Archangel’s Heart begins with a prologue set decades in the past, in which a nun discovers a sleeping child in the pew of a church. The child, Marguerite, is well-dressed and obviously loved. In a letter left with the little girl, her mother says she will return for Marguerite within a week unless “the worst happens” and she cannot.

Longtime readers of the series know that Marguerite was Elena’s late mother. Elena’s grandmother, the writer of the letter, disappeared after writing it.

The action then moves to the novel’s present day, two years after Lijuan’s disappearance and the rise of the ancient archangel Alexander. The Cascade has been on pause for these two years, but Elena senses that it is about to resume.

The Cadre is called to meet by spiritual seeker angels known as the luminata. They alone have the authority to force such a meeting, and they have done it so that the fate of Lijuan’s territory can be decided.

The luminata’s remote and isolated stronghold, Lumia, is situated in Morocco, the land of Elena’s grandmother, and since Elena is thought to have vampire blood, she hopes that one of the immortals in Lumia will be able to provide her with more information about her vampiric ancestor.

Raphael chooses Aodhan to act as Elena’s escort in Lumia. Meanwhile, the Cascade resumes with simultaneous small earthquakes around the world. The damage is fortunately minimal, but it calls Raphael’s attention to Lijuan’s neglect of the people in her territory.

When Raphael and Elena invite Aodhan and Illium for dinner, Aodhan is angered by Illium and Raphael’s overprotectiveness of him, and his reaction offends Illium in turn. The rift between Illium and Aodhan persists into the next day, and when Raphael, Elena and Aodhan leave for Morocco, Illium is not there to say goodbye, although Aodhan watches for the sky for his appearance.

Lumia turns out to be a disturbing place, beautifully designed and outwardly serene, and yet, the visitors feel unseen eyes observing them. The New York angels meet with Alexander and his grandson, Xander, while there, and Elena also looks forward to seeing Hannah once again.

The leader of the luminata is Gian, an angel whom Raphael describes as “dangerously strong.” While in Elena’s presence, Gian behaves in a way that signals a romantic or sexual interest, making her feel uncomfortable.

Shortly afterward, Elena overhears a conversation between two luminata about her. The two angels note that her resemblance to an unnamed woman is extraordinary. “It feels like a ghost is haunting Lumia,” one of them says. But when Elena tries to ask for information about her ancestors, the angels of Lumia clam up.

Meanwhile, Aodhan befriends a scarred angel who has found refuge in Lumia, Laric, but Laric does not seem to have the answers Elena seeks.

Do those answers lie in the nearby village, or within the walls of Lumia itself? Will Elena find out who her vampire ancestor was, and what fate that person met and why? Will the Cadre find a solution for Lijuan’s neglect of her lands, and will the voyeurs of Lumia get the punishment they deserve?

These questions and others are answered in Archangel’s Heart. I am happy to report that the novel makes for satisfying reading. I especially liked that there was no manufactured conflict between Raphael and Elena. In fact there was no conflict at all between them. All the conflict was between the angels from New York and some of Lumia’s inhabitants.

In a single novel romance I might have minded the lack of romantic conflict, but since this is the fifth book in this series to focus on Elena and Raphael as the central couple, it felt good to see progress at work in their relationship.

Raphael has figured out that he can’t protect Elena at the cost of her freedom to be herself. Elena has figured out that sometimes it’s better to be cautious than to prove her courage. With the conflict decoupled from the romance, each has a chance to help the other in a pinch, and their teamwork shines.

There was less sex in this book than in some of the earlier ones, but since we’ve seen this couple share a bed at least a dozen times in the past, I was actually glad of this. Unless it reflects a conflict between them, or shows how they resolve something—in other words, moves the plot forward—it’s not needed.

Lumia’s spookiness was well-depicted, and the setting was effectively atmospheric, with an emphasis on eyes watching from hidden places and opulence in place of the austerity we associate with isolation for spiritual purposes.

For those readers shipping Aodhan and Illium, there is much in this book in the way of background about their friendship, but no clearly stated romantic interest yet. It is obvious that these two feel strongly about and for each other, though, and there’s even a passage in Elena’s POV which relates that angels can be bisexual, which may or may not be laying the groundwork for something more.

There is also more Cascade action, and enjoyable interactions with other secondary characters, including family (Caliane), friends both old (Alexander, Hannah) and new (Xander, Laric), as well as enemies (Michaela and others).

My nitpicks are limited to these: The tete-a-tetes about the voyeurism going on in Lumia got repetitive after a while (One could almost make a drinking game out of “So you sense it too?” conversations among the visitors), and although the scene that closes the book was emotionally very satisfying, the dynamics there seemed illogical and unlikely.

Overall, though, Archangel’s Heart was a thoroughly enjoyable addition to the Guild Hunter series. B+.