I am pretty sure I bought that at the recommendation of has_bookpushers on September 6, 2011, (according to my Kindle records).  But like many a book, it languished (or was lost) in my to be read pile.  Internet chatter about this book rose up and I pulled it out to read.  Okay, I actually went to buy it at $.99 but I was told by Amazon I had already purchased it.  I started and read non stop until the last page. 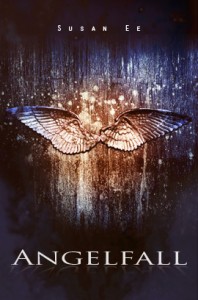 Penryn lives in a post apocalyptic world brought on by the Angel Gabriel bringing war to the humans. Gabriel was destroyed in a flurry of return gunfire by the heavenly hosts are too much for the humans.  His body wasn’t recovered but the televised fight played all over the world as evidence that angels were not invincible. Humans have turned into refugees and lawless gangs rule the cities while everyone afraid of the dark.  In the dark, the angels come out or even worse – unknown terrors.

Penryn has made the decision that her insane mother and crippled little sister must move out of their condo because it has been marked for gang infiltration. They move out at night even though the night is so dangerous that even the gangs stay inside.  It is their only chance, or so Pen believes.  Pen makes a number of these decisions throughout the book. Some work out and some do not but each decision is backed by some thought so she never appears foolish, only not completely in possession of all of the facts.

In the midst of their escape. Pen sees a glorious angel with white wings attacked by other angels.  The white winged angel’s wings are cut off but he still fights on.  Spurred by some crazy compulsion, perhaps due to her own instinctive penchant for underdogs, Pen picks up his discarded sword and throws it at him.  In the ensuing confusion, one of the angels takes Pen’s sister from the wheelchair Pen is pushing her in.  Pen’s insane mother runs off.

Pen picks up the wings and demands the wounded Angel tell her where she can find her sister.  The Angel, Raffe, tells her that this is basically a suicide mission but what does Pen have to live for in this wasteland if she doesn’t even try.  Another calculated risk.  They don’t always turn out in her favor, but I admired her courage and her swift decision making. Pen is not a ditherer.

There are some worldbuilding flaws. Only six weeks have passed since the Angel Gabriel’s attack and death.  The post war seemed to be far too settled with its gangs and the established Angel aeries.  Technology has been totally destroyed to the point that some are using computers to form a brick like wall.  The complete hopelessness that seemed to have swept the land along with the abandonment of existing structures and technology came upon too quickly. I felt like the time that had passed from apocalyptic event to collapse was too quick but then again, how would Pen and Raffe be able forage for supplies in abandoned houses.

There is a mystery surrounding Pen’s mother that seems to be trotted out at only convenient times, providing strained coincidences. Raffe explains that the children of the angels and humans were unmentionable horrors yet there is not one nephilium that appears in the book.  Why was Raffe even on the Earth?  How did he get separated from the other Angels?  Why wasn’t he leading his men?  Some of those questions may be answered in a sequel, but I felt that they made the world building seem a little thin in areas.

Yet, these things are minor irritants in the larger captivating story.  Pen reminded me of Katniss, only more determined, less reluctant.  As for the romance, Raffie and Pen develop feelings for each other but it is low key and expressed in smart aleck exchanges.

We walk for about an hour before Raffe whispers, “Does moping actually help humans feel better?” We’ve been whispering since we saw the victims on the road.

“Of course you’re not. A girl like you, spending time with a warrior demigod like me. What’s to mope about? Leaving a wheelchair behind couldn’t possibly show up on the radar compared to that.”

I nearly stumble over a fallen branch. “You have got to be kidding me.”

“I never kid about my warrior demigod status.”

“Oh. My. God.” I lower my voice, having forgotten to whisper. “You are nothing but a bird with an attitude. Okay, so you have a few muscles, I’ll grant you that. But you know, a bird is nothing but a barely evolved lizard. That’s what you are.”

He chuckles. “Evolution.” He leans over as if telling me a secret. “I’ll have you know that I’ve been this perfect since the beginning of time.” He is so close that his breath caresses my ear.

Pen is represented as a teen but she could have easily been early 20s. She was an old soul, having been forced into responsibility early as the result of the death of her father and her mother’s insanity. I will provide this warning. The ending is a cliffhanger that takes a shocking turn. Ordinarily, I hate cliffhangers, but with this? All I can say is when does book 2 come out?  B+