REVIEW: An Outlaw in Wonderland by Lori Austin

When I first read the description of Outlaw in Wonderland, I believe I may have said “gimme gimme gimme” out loud. But I deny actually making the ~grabbyhands~ gesture. 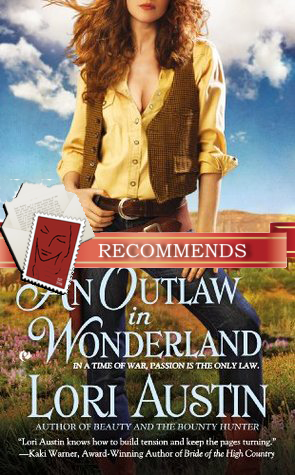 Saving soldiers’ lives at the Confederate army hospital Chimborazo, Annabeth Phelan is no ordinary Southern belle. She’s never known work more exhausting or rewarding. And she’s never known a man like Dr. Ethan Walsh, with his disarming gray eyes and peculiar ways. But now the Confederacy is charging her with another service: find the Union spy at Chimborazo.

Ethan’s one passion is saving lives, and if he can do that by helping to end the war, he will — even if it means spying for the North. He’s gotten used to fooling Confederates, but he can’t bear lying to Annabeth. And together, they are about to discover a new passion—one that could even transcend the chaos of war.

Then I saw the cover, and nearly changed my mind. But we’ll save that discussion for later.

I was expecting the kickass heroine, the noble hero, the wartime intrigue and the ugliness of 19th-century battlefield medicine. I wasn’t expecting all that to be only the first third of the book — but by that point, I was along for the ride. And what an angsty, adventurous, brooding, emotional, angsty, humorous, tense, DID I MENTION ANGSTY?, and romantic ride it was.

From the Confederate war hospital mentioned in the blurb, the plot takes us to the notorious Castle Thunder prison in Richmond to a Kansas cow town. In addition to amputations and espionage, we get amnesia, baby loss, infidelity, abduction, murder, a tornado, prison sex, opium addiction with forced detox in a tepee, and a lot of flying bullets.

Life had been a little chaotic since she’d gotten back to Freedom. It wasn’t every day that a sheriff fell out a window, a federal marshal arrived asking questions, Annabeth returned from the dead and the local doctor was shot in the head.

Amongst all that fabulous craziness, we’re treated to vivid secondary characters like a one-eyed retired schoolmarm, a reclusive smallpox-scarred lawyer, a fainting ex-mistress, a long-suffering federal marshal, and a former childhood friend/spymonger/Pinkerton agent who mysteriously appears at the absolute worst possible times. And, of course, the batshit-insane thug bandit obsessed with Alice in Wonderland.

But none of that overwhelms the angsty, messy romance. Ethan and Annabeth are drawn to each other out of mutual respect, loneliness and adrenaline in the chaos of the hospital. As their relationship evolves, we learn how ill-prepared they for mundane real life, struggling with the consequences of their wartime decisions and actions.

The main source of angst in Outlaw is a miscarriage — a trope that can be disastrous in the wrong author’s hands. But not in this book.

“Beth?” Ethan stepped into the room. Hands open to show he held nothing in them, he stared at her as if she were a wild thing. “What are you doing?”

“What you should have done.” She tightened her grip. “Long ago.”

“Shut. Up.” Annabeth swung the ax.

The crib shattered into several large chunks. She continued to hack away at it until the thing lay in several dozen small ones. When she finished, she tossed the blade in the center of the room and peered out the window. She needed to leave — this room, this house, this town, this life — but right now it was all she could do to stay on her feet.

“Why did you keep it?” she whispered.

Hope fluttered — or at least he thought it might be hope. He couldn’t quite recall what hope felt like.

The last thing Ethan remembered clearly was standing in the spare bedroom as his wife took an ax to their child’s crib. He’d been amazed, frightened, a little aroused. Which was pretty much the effect his wife always had on him. She was an amazing, frightening, arousing woman.

Am I wrong to find that romantic? But whatever — DAMN, that’s good writing.

I did have a few minor annoyances that disrupted my book trance. Ethan is the usual historical-romance-novel-doctor who is way ahead of his time in insisting on antiseptic surgery, a fact we’re reminded of several times. And to mark off a box on the Required Elements in a Western checklist, we have the noble Native American who silently communicates life- and soul-saving advice.

Speaking of annoyances…. The cover. Uff da, that cover. In addition to the huge disconnect between the cover and the blurb, we get a skeletal cover model in glaringly modern clothing — complete with zippered skinny jeans. And the western portion of the story is set in Kansas. I haven’t traveled the entire state of Kansas, but I’m pretty sure none it looks like Utah.

Now that the whining is out of the way, it’s true confession time — by the end of chapter six of Outlaw, I had to buy the previous book in the series (Beauty and the Bounty Hunter) and it’s even better. I’ll be waiting impatiently for the next one.