REVIEW: An Invitation to Sin by Sarah Morgan

It’s well known around here that you are on my list of auto-buy authors, whether you’re writing Harlequin Medicals or Presents. When I saw the blurb for your latest release, I thought it might resemble A Night of Scandal, which I thought was terrific. An Invitation to Sin is actually quite different, even though one of the main characters here is also an actor, but I liked it just as much. 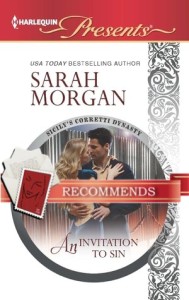 The novel is part of the Corretti Dynasty series of linked Presents novels, but it is early in the series and the reader doesn’t need to have read any of the other ones (or know anything about the storyline) to enjoy this installment. It opens with Taylor Carmichael attending a Corretti wedding in order to publicize the new film in which she stars. This is to be her comeback role, a chance to reenter the acting world she fled after a disastrous series of events sent her into seclusion. Taylor wants only to stay out of the limelight, but a chance meeting with the dashing and sexy Luca Corretti leads to a mishap with her too-tight dress, and there are photos splashed over the front pages of the tabloids the next day. Luca finds Taylor sexy and alluring but he’s uninterested in anything beyond the most superficially physical. However, when he realizes that his own career plans are  jeopardized by the paparazzi attention, he joins Taylor in manufacturing a fake love affair and engagement until the interest dies down.

Thus, two people who find each other very attractive but want nothing to do with relationships are thrown together. This is a pretty standard Presents setup, but their story and their characters are individual and appealing. Taylor’s history is more fraught and her personality has been battered by her bad choices and bad fortune, but she’s not a damaged heroine looking to be rescued by True Love. She absolutely wants to rescue herself, and her way to that is by rebuilding her acting career. Taylor truly loves acting, and from the first few pages the reader realizes that acting is substantively important to her, not a way to be a star or to be famous. She is devoted to it and finds it fulfilling.

Taylor’s history is definitely angst-filled, and part of it causes her problems in the present, but she works hard to manage them and to overcome her fears. In fact, the one time Luca tries to save her, he misinterprets what is going on and almost ruins everything. After the first couple of chapters, I found the balance between Taylor’s need to rebuild her self-confidence and her life more generally to be well maintained. I could see the insecurity and the fears clearly, but they weren’t all I saw.

Luca, on the other hand, is almost entirely devoid of angst and seems to find expressions of it puzzling. He’s used to women who care inordinately about their looks and their status, but his response is to avoid them as much as possible. Even as he realizes that a fake engagement will get him out of as big a jam as it will Taylor, he recoils at the thought:

Luca decided that maybe he could be the first engaged man on the planet who never actually saw his ‘fiancée.’ Pondering on that thought, he decided that the situation could actually be turned to his advantage. All he had to do in return for the responsibility he wanted was resist the urge to throw himself under the wheels of a passing car every time someone said the word engaged.

As his mind gradually emerged from the vice-like panic that came from thinking about weddings, he realised that Taylor Carmichael was probably already announcing to the world that she’d dumped him.

Knowing he had to act quickly, Luca spread his hands and smiled at the board. ‘I just came here today to share the happy news, but I’m afraid I can’t stay. Gutted though I am not to spend more time with you, I’m sure you understand. It’s Taylor’s first day of filming down at the docklands and I want to just go over there and be supportive, because—because—’ never having been supportive before, he floundered for a plausible reason for his actions ‘—because that’s what engaged people do.’ Truthfully he had absolutely no idea what engaged people did. All he knew was that he had nothing in common with them.

I loved Luca. He was so comfortable with himself, and while it was clear that his antipathy toward relationships and marriage stemmed from his childhood and the effects of his mother’s traumas, it didn’t turn him into a damaged or tortured person. I could completely buy the idea that if he met and was attracted to a woman who convinced him she wasn’t like that, his cast-iron rules would blow apart.

And Taylor does convince him, not by her words but by her actions. When they give in to their passions and sleep together, it’s the first time Luca has spent the night with a woman, but it’s Taylor who is running for the door:

Distracted by the urgency in her movements, Luca forgot his own panic and absorbed hers. ‘Is Etna erupting and we have just minutes to escape? Should I call the emergency services?’

‘Go back to sleep.’ Dragging open a drawer, she locked her hand around the first item of clothing she encountered. Dressed only in her panties with her trademark hair clouded and tangled from a night of wild sex, she was still the hottest woman he’d ever seen.

Realising that for the first time in his life he was witnessing a woman who was even more panicked about relationships than he was, Luca relaxed slightly.

She pulled on the T-shirt without bothering with a bra, a decision Luca supported wholeheartedly.

‘This is like a strip in reverse but it’s surprisingly erotic.’ His own panic fading, he hooked his hands behind his head and watched as she yanked on jeans in such haste she almost fell. ‘Where exactly are you going in this much of a hurry? This is Sicily. No one rushes in Sicily. You’re not on New York time now, dolcezza.’ But he knew her frantic rush to get dressed and escape had nothing to do with a desire to get to work and everything to do with her need to escape from a situation that terrified her. It would have terrified him too, except that she was panicking enough for both of them.

‘I’m going out—’ she snapped the words and zipped her jeans so violently he flinched ‘—out…somewhere. Anywhere.’

Luca sets out to show Taylor that she doesn’t have to be Taylor-the-star-who-messed-up, she can manage the paparazzi and have a semblance of a private life. While he goes to some far-fetched lengths to demonstrate this, the main way he convinces her is through his actions. He’s in the papers all the time, he has a reputation as a bad boy, but he doesn’t care.

Of course, much of the difference in their reputations is gendered; a sexually free woman is a slut, while a sexually free man is a stud. I would have liked to see this unfairness addressed more directly, especially since the crisis that befalls Taylor toward the end of the story turns on the difference. Still, Luca behaves the way I want my romance heroes to behave in these situations, and when he realizes how hard he’s fallen for Taylor, it’s a very satisfying moment.

Part of what makes this HEA gratifying is that neither character has to turn into someone different in order to achieve it. Taylor is no longer frantic and on edge, but she’s still recognizably the same person. And Luca is definitely the same person. He’s more willing to love and be loved but he’s still a bad boy, one who is slightly surprised at where he has voluntarily wound up. Grade: B+