REVIEW: All She Wrote by Josh Lanyon

When I began reading gay romance, or m/m, last year, your novels were among the first I read, and Fair Game was one of my top reads of 2010. My second-favorite fiction genre is mystery, so your books are definitely in one of my reading sweet spots. I didn't pick up the first Holmes & Moriarity novel right away last year, but after exhausting most of your backlist I went looking for it and happily realized it had nothing to do with Sherlock Holmes (yes, I'm an idiot who should read blurbs more regularly). As always, I loved your writing, but I was on the fence about the narrator, Christopher Holmes; his self-deprecating asides and witticisms came awfully thick and fast. You describe the book as a screwball mystery, and screwball is not my favorite style. But despite these caveats, I still found Somebody Killed His Editor to be an enjoyable read, so when All She Wrote, the next novel in the series, was released at the end of 2010, I put it at the top of my TBR. This book flowed better for me, maybe because Christopher seems more comfortable in his skin even though he is still a bit at sea in his personal and professional life. 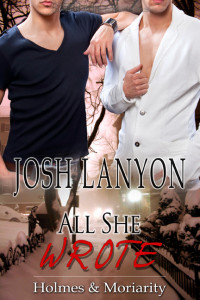 Christopher Holmes is a fortyish mystery writer with a successful series of cozies starring the British senior citizen and intrepid amateur sleuth, Miss Butterwith. Christopher achieved success with the first novel in college, but in the past few years the Butterwith books have sold less well and are seen as hopelessly unfashionable by agents and publishers looking for either the Next Big Thing, Regency Vampire mysteries, or grisly and gritty thrillers with high body counts. Christopher has recently shifted from a major publisher to a smaller one, so the Butterwith series continues, but he is afraid the writing is on the wall, so to speak. At the same time, his personal life has undergone an equally unpleasant upheaval when his long-term partner runs off with Christopher’s personal assistant. Over the course of the first H&M book, Christopher rekindles a past relationship with the gorgeous, younger, highly successful mystery writer (and former cop) J.X. Moriarity, but he has trouble believing that it can last.

When All She Wrote begins, Christopher is putting off a weekend with J.X. yet again, this time to go to the aid of his former professor and mentor, Anna Hitchcock. Anna is an elderly but still glamorous, intelligent, successful mystery writer and teacher who holds writers' workshops at her estate in western Massachusetts. Christopher agrees to take over the workshops after Anna breaks her ankle falling on icy steps, but he when he arrives, he discovers that Anna believes the injury is a result of someone trying to kill her. Christopher is skeptical, but after accidents and deaths pile up, it becomes clear that something is going on.

When a suspicious car accident puts Christopher in the hospital, he awakens to find that J.X. has flown across the country to be at his side and has no intention of leaving without him. Christopher persuades J.X. to stay while the body count grows and he attempts to solve the crimes. As the mystery develops, the reader learns more about Christopher and J.X.'s relationship and gains greater insights into why the former is so skittish about becoming involved with this intelligent, successful, seriously hot man who is so clearly in love with him.

The progress of the mystery is enjoyable and the solution is not obvious (although I should note here that I’m a pretty credulous reader), and as always, your supporting characters are entertaining and varied. The greatest pleasure of this read for me, though, was watching the characters and the relationship unfold. In the previous novel I found Christopher to be overly self-deprecating and insecure, especially given how early in his career he became successful and how long he sustained that success. And while his previous relationship ended badly, J.X. was such a winning character that I became impatient with Christopher’s dithering, especially his fixation on the five-year age difference between them. In All She Wrote, however, I realized that it was not the actual age gap that was the problem but Christopher’s fears about finding out, in his middle age, that he was so easily replaceable both personally and professionally. His publisher and his partner jettisoned him almost simultaneously, and in both cases they replaced him with newer versions which were not necessarily better, but were undeniably younger and fresher. It’s been clear from the beginning that in his relationship Christopher sacrificed happiness for security, and now we see that the Mrs. Butterwith series represents a similar type of compromise:

Victoria cleared her throat. "How long does it take you to write a book, Christopher?"

"Six months." Three of which were spent on research and convincing myself I still had one more Miss Butterwith in me.

I stopped chewing. Where had that thought come from? That almost sounded like I was tired of writing Miss Butterwith, and of course I wasn't. I adored her. I adored Mr. Pinkerton. I adored Inspector Appleby-‘even if he was in the closet.

Professionally as well as personally, J.X. has more faith in Christopher than the latter does in himself. He doesn’t like the Butterwith books in large part because he thinks Christopher can do better:

"Anyway, whether you said it in so many words or not, you certainly think I'm a hack."

He stopped wasting time trying to defend the indefensible and went on the attack. "I don't think you're a hack. I think you're afraid to write anything that challenges you or that means anything to you."

"As opposed to you and your high-octane literary masterpieces about the straight, gun-toting Inspector Dirk Van de Meer?"

J.X. bit out each word very quietly. "You're a better writer than I am, Kit. You should be doing more with that gift. Instead, you're hiding behind Miss Busybody's skirts."

It was my turn for a red face. Not that he could tell beneath all the bruises, fortunately.

But if Christopher admits that J.X. is correct, then he has to recognize how much his compromises are costing him. I am really looking forward to seeing how he works through this issue in the future.

The sex scenes are not graphic by the standards of this subgenre, but they are important in developing the Christopher’s character arc and his relationship with J.X., especially Christopher’s gradual willingness to let go some of his reserve:

"Was it all right?" J.X. asked a couple of turns of the world later.

I turned my head on the pillow. Stared at him. He stared back. He was serious. In fact, he looked uncertain. Didn't he know? Couldn't he tell? Hell, if the writing career didn't work out, he could always-‘I stopped that thought, stopped that instinctive and automatic sarcastic distancing, and let myself absorb what had really happened between us.

It deserved my full consideration. I'd never felt anything like it, never responded to anyone like that. It was like J.X. had reached into me and turned me inside out. I felt weak and empty and at the same time utterly relaxed and peaceful. It was so weird. As he'd fucked me, I'd felt helpless and out of control with the intensity of my reaction, both physical and emotional, but I really was…okay now. Better than okay. I felt very good. Yes, my body was a little sore and I was very tired, but the aches were all the satisfying kind.

I said shakily, "At the risk of sounding like something out of Ladies' Home Journal, it's never been like that for me."

His face relaxed into a smile. A faintly smug smile at that. Well, perhaps he deserved to feel smug.

If there is a weakness in the characterizations, it is that J.X. is too understanding. Even when he becomes angry or impatient, it’s for Christopher’s sake, not for his own. This extreme wonderfulness may be the precursor to a rollercoaster ride which I will happily take, but if not, I hope that as the relationship continues, the complexities in J.X.’s personality and emotions become more fully realized.

As in so many of your novels, the writing is amazing. Of course different readers respond to different styles, but there are few novelists in any genre whose work I find more satisfying to read. You write in a straightforward and understated style which is effortless to read, but it makes the emotional payoffs all the more effective because they sneak up on the reader. And you pull this off in the first person! Since everything the reader learns has to come through the eyes of the narrator, in less skillful hands the narrator can wind up being omniscient to the point of divinity or expository to the point of reader boredom. In your books, by contrast, the narrator reveals the world around him naturally and elegantly, and it is only as the story unfolds that we realize the ways in which the narrator might be the tiniest bit unreliable. But it doesn’t feel like a trick. It feels like the way we acquire and process information in the real world.

There. I have made it through this entire review without once mentioning any other highly praised and greatly loved series you have written, much less made comparisons. All She Wrote deserves that, because it succeeds admirably on its own terms. I look forward to more installments of Holmes & Moriarity.