REVIEW: All or Nothing by James Buchanan 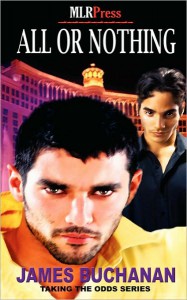 ***WARNING: There will be spoilers in this review for the two previous books in the series. I will also discuss (with author’s permission) a plot point in this book that may or may not be considered a spoiler. I will mark the potential spoiler for THIS book more clearly.***

I immersed myself in All or Nothing the past two days and wow, was that an intense experience. This is a very dark book, very emotional, almost depressing — although you reward that emotional intensity with the closest I’ve ever seen you get to a real HEA (as opposed to your normal HFNs).

We’ve met Brandon and Nick before, in Cheating Chance (CC), where they get together, and in Inland Empire (IE), where they try to figure out how to make their relationship work. At the end of CC, Brandon is out to his partner but hasn’t actually said those three big words to Nicky (your trademark HFN). By the end of IE, he’s said the words *and* freaked out over Nick’s safety in public in the way only a romantic partner could, so that closet door is open a little bit wider than ever before.

This was one issue I had with All or Nothing (AON): NOT coming out, staying in that closet, is such a huge freaking deal to Brandon in IE that it’s the cause of all the relationship tension in the book. He then outs himself to at least five other cops at the end of IE, but the repercussions of that are barely mentioned in AON. This might be a lesson, right? Brandon had built it into such a huge deal but then it…just wasn’t. But that’s not made explicit in AON — it’s mentioned, but not explored. And while AON is on Nicky’s turf in Vegas, rather than Brandon’s turf in Riverside, I still expected more than just a few mentions of the effects of Brandon’s inadvertent outing.

Anyway…Brandon comes to Las Vegas from Riverside to visit Nicky for Christmas and New Year, but this time he brings his daughter with him. This increased contact with his daughter is partly Nick’s doing — he’s been pushing Brandon to man up and be a real father. Shayna is nine (boy, is she ever), she calls Brandon by his name rather than “Daddy” because that’s her step-father, she’s annoying and very much a tween (is 9yo a tween?), and I found it difficult to relate to her beyond the basic human compassion one has for most kids. Don’t get me wrong, she was REAL — I know kids like this — but I don’t deal well with other people’s kids (which has an acronym, Twitter has told me: OPK), especially not the bratty ones. Although I love that she’s bratty about keeping kosher.

So Brandon and Nick and Shayna struggle to both untangle and strengthen their relationships, while Brandon and Nick find time to get busy every now and then (hot, well-written bondage sex). And then Shayna is taken. She disappears and it’s obviously foul play and everyone falls apart. This is, obviously, where things get dark and intense.

What I adore about your writing is the emotional honesty of your characters. You let them be REAL. You let them experience all the shit that something like this would bring up: hate and anger and despair. They’re not brave, they’re not stoic, they’re not strong and understanding. They’re furious and despairing and guilty, oh so guilty. Brandon, not the most stable of people to begin with (as a cop says later, he’s a bottler), just implodes with guilt and fear and hate and inactivity. He can’t DO anything: it’s not his turf, he’s the victim, not the cop, but he KNOWS the odds, he knows the statistics on stranger snatches of kids, and he, literally, goes out of his mind trying to deal with it. You show his chaos, his mess, his insanity beautifully.

Some of the emotional intensity that I think is non-spoilerific:

Nick gripped the lip of the old wooden workbench at the back of his garage. Everything he knew about the world spun out beyond his grasp. It felt like he stood on a piece of cork floating in the ocean. Nick only moved in reaction to waves created by events he couldn't control. A sea of dark thoughts threatened to drown him, kill him, swamp his emotions under a deep, black abyss.

Bending over, Nick rested his forehead against his toolbox. Cold and tangible, the metal gave him an exterior focus. The past half-hour, the past few days, seeped into his pores like acid. As if someone pulled his nerves like wires, his face, neck and shoulders tightened up until it felt like the tendons might snap. "Stupid, fucking son-of-a-bitch," Nick hissed through clenched teeth. He slammed the butt of his palm against the bench. Almost a release, pain shot up his arm. "Goddamn selfish bastard!"

All the tension and fear he'd suppressed erupted at once, shredding his control. Bellowing an incomprehensible mishmash of expletives, Nick jerked upright. He spun and lashed out with his boot. The blow struck an old bucket full of stripped bolts and cast off car parts. The container slammed against Querida's fender, spewing metal bits as it spun off into a corner. Nick's blood sputtered with the rattles.

"Fucking bastard!" He roared and kicked again. This time his target was the front tire of the hearse. Slamming his fists against the hood, kicking the tires and fender, Nick yelled, "Asshole, fucking asshole," over and over. With each repeat the blows got wilder and his voice broke just a little more.

Fear mixed with anger and poisoned Nick's thoughts. "Why? Why didn't you say something?" Right then and there he hated Brandon. Hated him more than he ever thought possible. And he wasn't certain he could ever go back from that point. "You stupid son-of-a-bitch!" Nick pounded the car, taking his rage out on unyielding metal when he really wanted to slam his fists into Brandon’s face.

The mystery, though, felt a little off to me. The journal insets from the villain were just…strange. I know that was the point — this person is completely deranged — but I’m not sure that it did anything to explain the villain’s motivations.

***SPOILER WARNING***
Also, I guess I don’t understand why the villain would NOT have killed Shayna. While we can’t kill kids in romance, Brandon’s statistics are much more realistic than what actually happened. And after the buildup around the whole situation in which you show the police taking everything seriously, having Brandon and Nick go off half-cocked to check out the villain’s house because Brandon thinks that the police won’t believe him, won’t take the situation seriously, seemed a little unrealistic to me.
***SPOILER WARNING***

However, I bought it all while I read it, because I was so pulled in by the characters. This is stuff I’ve thought of since finishing.

The ending was perfect, a satisfying conclusion to the emotional darkness of the rest of the book. Our boys walking off, almost literally, into the sunset. They deserve their happy ending. And I’m so glad I got to follow them on their journey.

My issues with the mystery would normally knock this grade down to a B at least, but the emotional honesty and intensity of this book is too good for anything other than a B+. That’s the power of this series as a whole, but of this book specifically. Thank you for that honesty.

P.S. For those who can’t get enough of Nicky and Brandon, there are three free shorts at James’ website.

→ SarahF
Previous article: Thursday News Thread: Penguin and Amazon Have Kissed and Made Up
Next Post: Friday Film Review: Trouble in Paradise