REVIEW: After Hours by Cara McKenna

After Hours is a gritty romance. It’s set in the economic wreck that is much of the state of Michigan. The protagonists work a “high security ward designed specifically for men who suffered from persistent, disruptive psychotic episodes.” The story contains poverty, violence, and people who just barely make it through each day. The hero and heroine share a relationship that, in the first half of the novel, some may deem abusive. As I read it I so did not want to be anyone or anywhere in the book. It made me grateful for my cushy, safe life. It reminded me how protected I am. It made me, at times, uncomfortable. It is a harsh tale well-told and I like it so much I’ve read it three times in the past month.

Erin Coffey is a twenty-nine LPN (Licensed Practical Nurse) who has just come off of six-year stint of being the live-in caretaker for her grandmother who suffered from dementia. She’s taken a job in Dillon, a “shithole” of a town in southeast Michigan, at a psychiatric facility called Larkhaven in order to live near her younger sister Amber and her nephew Jack. Here’s how Erin describes herself:

“…little old me, the LPN who’d had exactly one real patient in her entire so-called nursing career. And I was little. An inch or two shorter than average, plus after a few years on what I called the Social Security Diet—a lot of beans and toast and soup to stretch the pathetic amount of money the government deemed adequate to keep me and my grandma warm and fed and clothed—I didn’t cut a very authoritative figure. I had a baby face and round blue eyes to match, too-soft light brown hair that defied all promises made by thickening shampoos. Once on the ward, the most intimidating thing about me would surely be the syringe in my hand.”

Her first day on the job, she notices Kelly Robak, a huge guy who works at Larkhaven as an orderly. Also on her first day, a severely schizophrenic patient named Lonnie lunges at her with a pizza crust as he screams obscenities. Afterward, as Erin tries to pull herself together in the staff room, Kelly comes in, asks if she’s OK, and tells her he’s taking her out for a drink after work.

“Oh jeez. I better not. I’m really tired, and I have to be up at six again tomorrow.” I hadn’t even unloaded my car or set foot in my new apartment. I wanted to change into my familiar pajamas and reread a few nursing textbooks’ chapters on paranoid schizophrenia, try to figure out how I could have handled myself better with Lonnie.

Kelly shook his head. “Get changed and meet me in the lot. You can follow me in. You living in town now?”

He gave me skeptical look, the most judgment I’d seen from him.

“I’ll drive you, then. You can leave your car.” And then he disappeared, giving me the distinct impression that his invitation was as negotiable as a hostage taking.

I was pooped. I obliterated my name from the duties board, dropped off my paperwork, and changed, tossing my scrubs in the hamper. The day had done the same to me—wiped me clean out and wadded me into a rumpled heap.

Though Kelly was surely only trying to be helpful in his bossy way, I resented being ordered around, especially by a man. Like I needed rescuing. I didn’t want to be rescued—in my family, I did the rescuing.

If I suddenly needed assistance, who in the hell was I?

But it was good, I decided as I buttoned my sweater—an invitation to grab a quick drink with Kelly. I was in over my head, and he’d have advice to help me stay afloat. He’d had a first day once, too. We’d talk and it’d push the incident a bit further back in my head, so it wouldn’t be the only thing running through my mind as I tried to fall asleep in a strange room. That voice, those words; that accusing pizza crust pointed like a switchblade at my face. As I left the locker room and headed down the hall, I felt that corset sensation again. Only it wasn’t from the scare. Every step I took toward the exit, closer to Kelly, tighter, tighter. Funny how my body reacted to him the same way it did to the thought of getting assaulted by a patient.

Erin hasn’t misread Kelly; he is a man who likes to be in charge. Erin tries to tamp down her libido for despite finding Kelly sexy as hell, she’s sure he’s the kind of asshole her mom and sister hook up with, the kind of guy Erin has spent a lifetime resenting.  Erin’s will-power is no match for Kelly’s seduction and within a week of meeting him, he’s got his hand down her pants and is telling her when they actually fuck, she’ll be pleading for his dick. The following day, over another round of drinks, he asks her, the next time they both have the same two days, off to come to his place and let him take her the way he wants.

“I’m inviting you to come over so we can explore the thing that’s between us. I know you feel it, same as me. I’m offering you a chance to shut your brain off for a weekend, so we can spoil each other’s bodies rotten. Let me boss you around and I promise you’ll find out I give twice as good as I get. I’m not gonna try to fuck your ass or dress you up like a hooker—”

“Be still my heart. Kelly Robak, you charmer, you.”

“There’s four things a real man has to be able to do for a woman.”

“Exactly how many man-lists do you have?”

He let my wrist go and ticked the items off on his fingers. “Fix her car. Grill her a steak. Kick the ass of any guy who makes her cry. And fuck her so hard she wakes up half-crippled.” 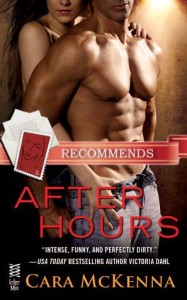 After thinking about it for a week, a week where dealing with her stressful job and her irresponsible sister has worn Erin thin, she agrees to two days with Kelly. It’s a hell of a two days. They have almost constant sex, exchange verbal challenges and some serious slaps. He makes her beg for his cock and she makes him beg for her to make him come. Erin has never had sex anything even close to what she does with Kelly and when the weekend’s over, she wants it to happen again even as her brain tells her Kelly’s a nail and bail kind of guy.

Kelly is, of course, far more complicated than Erin first believes. He likes strong women and they usually, after a week or two of his “bossy” behavior, take a hike. He grew up with a drunk for a dad and, as an adult, has stayed emotionally disengaged from the world. When he first hooks up with Erin he tells her “A man needs meat, sleep, and pussy, to keep from going insane.” More than that, well, that’s not on his list.

If I had to label After Hours, I’d call it an erotic romance. Ms. McKenna devotes a large portion of the book to graphically detailing the sexual encounters between Erin and Kelly. These encounters are combative and caring; they work to show the fragile bond that Erin and Kelly build almost in spite of themselves. Erin and Kelly are only truly comfortable when they are in charge. They are care givers not care takers and neither can easily accept support from the other. Both are good people, human, but good. I admired them both for the jobs they chose and for the compassion they show those they tend to at Larkhaven.

In After Hours, the work they do is dangerous, difficult, hard–twelve-hour shifts on a rotating schedule–, and emotionally wrenching. They earn enough to support themselves but not to do much more than that. Erin lives in crappy on-site housing with shared a bathroom and kitchen. Kelly lives in Dillon, in a one-story ranch “on a tired-looking residential block” with “fewer boarded windows” than Erin had “expected.” Erin watches her nephew whenever her sister needs her to and dreams of getting more education, of maybe going for her RN, or when she really dreams big, of becoming a psychiatrist. She and Kelly are the type of people who show up even when they’re exhausted and burned out. They do that proverbial right thing when no one praises them or, most of the time, even appreciates it. Their world (this world) is full of people who don’t think about the orderly walking the patient back to his room or the nurse making sure she’s dispensing the right meds. Ms. McKenna doesn’t portray them as heroes but she does make the reader powerfully aware of how valuable the work they do is.

Ms. McKenna is a decisive and strong writer. Her descriptions of the patients and the employees at Larkhaven are unsentimental and clear. She accurately depicts the pecking order–from the physicians down to the kitchen workers–that exists in every medical institution. She manages to show each of her characters as complex. In the world she creates, there are no stereotypes, no easy to peg personas. She writes with compassion, humor, and intelligence; I can’t imagine anyone faulting the picture she paints of psychotic patients and their caregivers.

There isn’t much of anything to fault in this novel. (One small thing: it would be the very rare nurse who’d never heard of Reye’s Syndrome.) The barriers to Erin’s and Kelly’s happiness are real and not easily overcome. The ways that they (and Amber) change are incremental and feel true. By the novel’s end, the promises Kelly and Erin make to one another are blunt, beautiful, and believable. They’ll still get up each morning, go to work, serve the patients at Larkhaven, and argue about who’s paying for what. They’ll come home each night, and if they’re not too beat, bone each other’s brains out. Erin will probably go back to school, maybe on-line. At some point, they might buy a bigger house, maybe even have a kid or two. Maybe. Whatever they do, they’ll be happier doing it together than if they’d done it apart. That’s love in the very real world of After Hours. B+

→ Dabney
Previous article: GUEST REVIEW: O that I were a glove upon that hand: Lord of Scoundrels by Loretta Chase
Next Post: REVIEW: Light in the Shadows by A. Meredith Walters