Addicted is the third work of yours I’ve read. (The other two are Sheltered (reviewed here by Jane and January) and Restraint.) I’ve enjoyed all three works–Restraint is my favorite–but, after I finish each book, I think, who the hell were those people? That’s not a bad thing–in fact, I like it. Romance critics often bemoan the sameness of many of the books we read; we complain frequently about overused tropes (a term I so overuse I vow to give it up after this review.) This is not a problem in your books. You write the unexpected; when I read Addicted I thought about a scene in Karen Ranney’s in An Unlikely Governess where the hero describes something unique as being like a unicorn. In Addicted, both the heroine–Kit Connor–and the hero–Dillon Holt–and their love story are unicorn all the way. 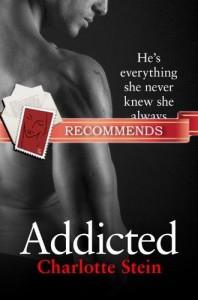 After all, what do I know about sex? Nothing. Less than nothing. Every sexual encounter I’ve ever had has occurred beneath the sheets, under a double layer of darkness. Once I started kissing some guy’s elbow, thinking I’d found his cock. And as for the pleasure I’ve just described to her, in my twisted tale of kinky delights …

Well, I guess that’s disingenuous of me, at best. I should have written:

Sex for her was sort of like being vaccinated, by a big pink finger.

‘Here,’ she says, and I know what’s going to happen before she’s even finished fishing through her wallet. She’s finding a card for me, with the name of some expert on it. She did the same thing last year, when I told her I was afraid of spiders – she sent me to a wellness specialist, who made me touch a spider.

Which doesn’t bode well for this particular scenario.

‘You want realism? You should try this on for size,’ she says, then hands me a square of yellow construction paper with a terrible-sounding title emblazoned across its front. Sexual Healing, it says. As though Marvin Gaye is going to help lower my expectations and make me all normal again. ‘It’s a kind of therapy group for people with sexual … issues.’

Oh, God, there’s that word again. Issues. And if I’m not mistaken, she seems to think that I have them. This isn’t just a friendly word of advice to help me be more than a librarian.

This really is her way of making me touch a spider – only the other way around. She wants me to sit in a cold, probably clinical room, with people who think sex is a hideous nightmare. I’m going to come away even more depressed about the whole thing, and probably never do it again.

Is that the aim here? To make me never do it again?

Kit trudges off to the group and there hears Dillon wax profusely and profanely about all the fucking, sucking, licking, and dicking he’s done. He’s a sex storyteller on verbal steroids and Kit is transfixed. After the meeting, Dillon follows her and, once she explains she was only there because she was doing research for a “dirty book,” Dillon, full of sly amusement, offers to help her with her work and tells her to come round to his flat the next day.

Kit’s not quite sure what to expect from Dillon, but what she gets, that first day in his apartment, isn’t anything she’s ready for. Not only is Dylan (just barely) wearing a towel, he’s so orally outrageous, Kit struggles to follow their conversation. When she asks him what he’s got planned, he laughs.

‘Ohh, you have no idea what I’ve got planned. Bad things. Outrageous things. You’ll be talking to your therapist about them in ten years’ time.’

‘You’re fucking with me.’

Oh yes he is. He regales her with a Guccione-worthy tale of how he lost his virginity, tells her he’s going to make her come so hard she’ll be amnesic, gently kisses her, and makes her lose her mind. She then bolts-after the first cataclysmic orgasm of her life–only to realize he’s palmed her novel and she has no choice but to see him again. When she does, he proposes–to further her education–they act out the chapters of The Master. Kit, anxious and agog, agrees and the two begin an erotic exploration that includes lots of sex but, as Kit slowly discerns, little intimacy.

The book is told entirely from Kit’s point of view–kudos there; this is one of the best first person narrations I’ve read–and so the reader experiences Dillon only through Kit. Given that Kit’s not all that great with relationships–her life is distressingly lonely–it takes both the reader and Kit much of the book to see what an utter faker “open” Dillon is.  He’s all talk, action, and hidden heart. And, after a while, Kit, whom Dillon has empowered with his massive cock and his unlimited sensuality, demands Dillon offer her his inner self.

I liked Addicted. Neither Kit nor Dillon really know what they’re doing in life–I think one could classify this as post-New Adult Erotica–and their relationship pushes them both, in fits and starts, to take ownership of their lives in lovely and healthy ways. The book is very funny–Ms. Stein has a hip deadpan humor that is vibrantly fresh–even as it is keenly sad. I found the novel more romantic than sexy; there is a crassness to the sex that, for me, was interesting but not arousing. However, I bet if you like modern erotica, you will find Addicted salaciously steamy. I give it a B+.