REVIEW: A Wind in Cairo by Judith Tarr 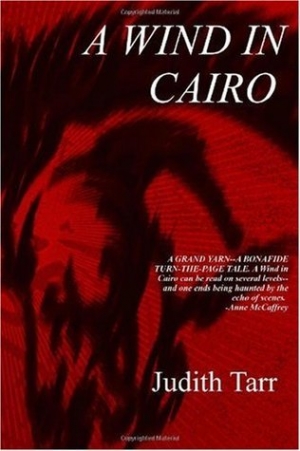 You’ve long been a favorite fantasy writer of mine. Your attention to historical detail, combined with your love of complex female characters and interesting relationships have made them must-reads for this sff-romance lover. A Wind in Cairo uses those things to its strength with a jewel of a heroine, a richly described environment, and multi-dimensional secondary characters; but the plot is by necessity detrimental to the romance I wished were a little more at the fore-front of the story. Still, I keep thinking about the book because what you wrote demands it.

For one, I was surprised I accepted the hero, Hasan. When we’re introduced to him he is a rich, spoiled, insufferable young man, wasting his father’s money and patience until he is to be sent away to foster in the desert with a tough old sheikh who was supposed to teach him to be a man. And yet even through his introduction there was something about him that led me to believe he was more than that.

Even though this wasn’t a genre romance novel, I wonder if this is a romance novel hero syndrome. As bad as some heroes are supposed to be, we know they’ll be redeemed in the end, so we also know they’re not quite as bad as made out to be. And so I found it easier to sidle past the fact that after a very rough night when he’s beaten close to death and rescued by a kind old healer (Hajji) at his home, he rapes the healer’s daughter. I rationalized slightly- he was just waking up; he was probably still under the influence of drugs or healing spells; he was used to women falling into his arms and he just assumed this young woman was doing the same, despite her fighting like a demon. I was disgusted with him but made excuses, maybe because he didn’t understand why she fought when she’d so obviously wanted him (from his perspective).   I’m still thinking about why I had this reaction when it goes against my norm.

I think in part it’s a testament to how you write. You convinced me somehow he wasn’t an irredeemable bastard even while I hated him. And at the same time the whole thing was very pro-woman. What I remember most about the scene is the aftermath when the father comes in, as angry as his daughter, assigning no blame to her and verbally flays Hasan (“A man rules his lusts. Only a beast would do as you have done: rise up in the mere presences of a female, and seize her, and rape her.”) And Hasan finds out this is his unlucky day. Because Hajji is the most powerful sorcerer in Cairo, and he turns Hasan into the beast that he’s shown himself to be. Hasan is made into a horse and a geas laid upon him that he must submit completely to a woman in his innermost soul, that he will be mute as the beast he is, that he may speak once and only once as a man, and that he will only resume his human form after he dies.

Is it a spoiler to suggest that this happens? Probably not. If there’s a geas on a hero, he usually goes through all of it to get to the other side. Unless it’s GRRM in which case an unexpected avalanche smushes him as he takes his first step on the road to redemption.

So Hasan is sold at the horse market, and even as a horse he’s a jerk, wild, going after a mare in heat, only subdued when forced to. The men want to destroy him when a young prince offers to buy him, and leads him to the house of his father’s deadliest enemy, a man whose sons he’d killed to end his line, Yakzuk al-Zaman. And the prince to whom he belongs is soon revealed to be a young woman, al-Zaman’s only remaining child, Zamaniyah.

This is where the story gets really interesting to me. Al-Zaman has brought his daughter up teaching her all the things a young man would know, simply because she’s active and intelligent. But when her brothers die, he requires that she dress and act as a man so that she may become his heir. And you start to hate him for forcing a gender role on his daughter when he does something unexpected. When he is given the right to ask any favor by his sultan, Salah ah-Din (Saladin), he asks that his child be made heir, and reveals her to be a woman so she might hold the position on her own terms. The sultan grants the favor, and Zamaniyah’s forthrightness and honor give her a place at his side as a favorite.

When the sultan’s name is revealed, I realized this all is based upon history. Zamaniyah was not real, but there were cases of this happening, and all of the historical figures surrounding the main characters are real as are the events that happen, though you massage them as a good novelist would.

Everything that follows from this point is history being told through the eyes of several characters, Zamaniyah, Hasan (now called Khamsin as a stallion), and Jaffar, the eunuch/guard/best friend of Zamaniyah. All three multifaceted, with stories and agendas of their own, as are several of the minor characters we’re introduced to, like Wiborada, the slave/concubine of al-Zaman, a blond female warrior from north who wants to escape back to her people. There’s always more to them than just a line describing their plight. All your characters are interesting. I actually loved Jaffar the most. His story was deeply poignant.

But Zamaniyah too, growing into and finding her agency, was marvelously drawn, and you used her to explore a lot of issues concerning gender roles that didn’t just apply to the past. Hasan, well, he is an ass (no pun intended) for a good long time. But that slow change only makes it convincing.

So (and I have to majorly spoil this but anyone who picks this book up knows that it’s coming) when he gets his human form back near the end of the book, there’s not a lot of time for a human romance to develop. She wants him, but it seems like it’s because he’s gorgeous and he helped her several times in his horse form. His side is easier to understand. But I felt like the transformation would have been better to come much earlier to give them time to get to know one another. I’m not saying you should have written it that way. You just had a different emphasis in the story than I wanted.

This has run long, but only because there is so much for me to think about in this book. Honestly, I picked it up because I still like horse stories and it was recommended as one I might enjoy. There was so much more to it than that, the history brought to life, the characters exploring gender and submission and being owned, what it means to be male and female, and what love is and requires of people. I would have preferred the story have a little more emphasis on the romance, but I still am glad I read it. It’s probably my favorite of your books. B+.