REVIEW: A Week to be Wicked by Tessa Dare

As I read A Week to Be Wicked, I kept thinking about Cyndi Lauper’s assertion “Girls just want to have fun.” The heroine of this book, Minerva Highwood, prior to hitting the road with your hero, Lord Colin Payne, really hasn’t had much fun. She certainly hasn’t had any fun where men are concerned. As her mother writes in a letter to cousin—her rather awful mother  actually dictates it to Minerva to write— 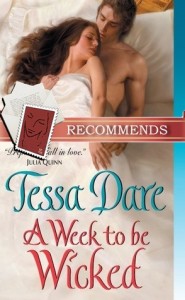 Minerva’s a spectacle-wearing bluestocking. She’s always reading and is beyond fascinated by fossils she’s found in the caves of her home, Spindle Cove. She’s never been kissed, never fallen in love, never let herself go wild, and, when she does allow herself to dream, she dreams of having her geological research taken seriously by Britain’s (all male) geologists. She’s certainly never done anything truly outrageous until the night she marches up to Colin Payne’s door in the middle of the night. Minerva believes Colin plans to propose to her gorgeous older sister Diana and Minerva is dead set against such a union. Minerva is sure Colin is only marrying Diana in order to inherit his fortune—which he can’t get until his next birthday or until he weds. She’s also sure Colin, who is known as a rake of the first order (he’s famous for having a woman in his bed every night), isn’t good enough for her sweet sister. So, armed with the determination she’s known for, she bangs on his door and demands he speak with her. He opens it half-dressed and surveys her.

“I’ll admit,” he said, “this is hardly the first time I’ve answered the door in the middle of night and found a woman waiting on the other side. But you’re certainly the least expected one yet.” He sent her lower half an assessing look.

“And the most muddy.”

She ruefully surveyed her mud- caked boots and bedraggled hem. A midnight seductress she was not. “This isn’t that kind of visit.”

“Give me a moment to absorb the disappointment.”

“I’d rather give you a moment to dress.”

Minerva would like for Colin to dress because she finds him alarmingly alluring. And, when around alluring men—and Colin is the most alluring she’s ever met–Minerva’s big brain turns to mush.

Minerva considered herself a reasonably intelligent person, but good heavens

. . . handsome men made her stupid. She grew so flustered around them, never knew where to look or what to say. The reply meant to be witty and clever would come out sounding bitter or lame.

Only days later, while she was banging away at a cliff face with a rock hammer, would the perfect retort spring to mind.

Remarkable. The longer she stared at him now, the more she could actually feel her intelligence waning.

Colin doesn’t dress and Minerva, helped along by a bit of wine, asks Colin to marry her instead or, rather, to make it look as though he’s eloped with her. She asks him to accompany her to the upcoming Royal Geological Society of Scotland’s annual meeting in Edinburgh where she plans to present her fossil findings which are so extraordinary she is sure she will win the five hundred guinea prize for the best presentation. She promises Colin her prize money if he comes with her. Colin thinks hers is an exceedingly bad plan. Not only will it ruin Minerva’s chances of ever marrying—the trip entails two unchaperoned weeks in his company—but it goes against his own personal code of ethics. He tells her,

“I’m a lover of women, yes.” Then he lifted his empty hand. “And yes, I seem to break everything I touch. But thus far I’ve succeeded in keeping the two proclivities separate, you see. I sleep with women and I ruin things, but I’ve never yet ruined an innocent woman.”

Colin says no that night but, over the next few days, his determination wavers. Minerva takes him to see her fossil—it’s a dinosaur footprint–, the two talk, end up sharing quite a kiss, and, despite his conviction the trip is a disastrous idea, early one morning, he and Minerva are on their way on what turns out to be one very fun road trip.

I wasn’t expecting to so like this book. I found the first Spindle Cove book, A Night to Surrender, overly cute and rather bland. My favorite of your books is your first, Goddess of the Hunt, and I haven’t enjoyed any of your others as much as I did that novel which is one of my favorite historical romances. A Week to Be Wicked isn’t as wonderful as Goddess of the Hunt, but it’s damned amusing, well-written, and sexy. Colin and Minerva are perfectly paired lovers and their romance and mad dash to Scotland–while improbable–make for a very appealing read.

This book is very funny. Colin cracked me up time and time again. When his cousin Bram tries to convince Colin that marriage would do Colin a world of good, Colin response is priceless.

He quietly groaned. Again and again, he’d witnessed this phenomenon with his friends. They got married. They were happy in that sated, grateful way of infrequently pleasured men with a now-steady source of coitus.

He, of course, can’t imagine himself married. He keeps the world at bay through debauchery and a great deal of charm. When he was a child, he witnessed his parents’ gruesome deaths in a carriage accident and since then, he’s been both unable to sleep alone—hence all the women in his bed—and unwilling to let himself feel uncomfortable or strong emotions. He likes life pleasant and he likes to make all those around him happy and thus helpful to whatever end Colin is pursuing. As he and Minerva travel, Colin, in hilarious ways, gets all sorts of people to assist them. At one point, he and Minerva have hitched a ride from a set of gossipy young ladies who ply him with questions about their journey. Colin, who is still hopeful he can somehow save Minerva’s reputation, announces not only are he and Minerva siblings but, well, they might be royalty. He tells the awestruck trio,

“But it’s recently come to light that our father was possibly descended from the line of Prince Ampersand, ruling monarch of Crustacea.”

“Crustacea,” Cordelia echoed. “I’ve never even heard of it.”

“Neither had we!” he exclaimed. “We had to dig out the atlas from our father’s library and dust it off when we received the letter last month. A very small principality, apparently. High up in the mountains, along the border of Spain and Italy. The entire economy is based on the export of calendula and goat cheese.”

Minerva bit back a laugh. Any imbecile with an atlas knew Spain didn’t border Italy. And good luck growing calendula on a mountaintop.

“What did the letter say?” Cordelia asked.

“You see, some months ago, tragedy struck the tiny alpine paradise. The entire Crustacean royal family was wiped out by a particularly virulent strain of violet fever.”

I laughed aloud at many scenes in this book—it’s the funniest historical fiction I’ve read in quite a while.

As Colin and Minerva make their way toward Edinburgh, Colin uses his good looks, charm, and wit to seduce Minerva into having fun. He gets her to cut loose, to participate in his elaborate stories, to sing out loud in public and, every night (one condition of his accompanying Minerva was she’d sleep with him each night so that he could actually get some sleep), to discover how pleasurable sharing a bed with an uninhibited, sexually generous man can be. From the beginning of the trip, Colin has promised Minerva he will do two things. He will get her to Edinburg in time to present her fossil—they are traveling with a plaster cast of the footprint they name Francine—and he will keep her virtue intact. Both promises prove to be extremely challenging for Colin to make good on.

I had a lot of fun reading A Week to Be Wicked. Minerva, at the book’s end, is still trying to get the geological world to take her work seriously and whatever she has given up for her own personal happiness, she does so on her own terms. Colin overcomes his demons delightfully and his love for Minerva (and hers for him) is convincing. The premise of the book is unbelievable, but, the story so well and wittily told I found I didn’t care. I give it an B+.