REVIEW: A Study in Silks by Emma Jane Holloway 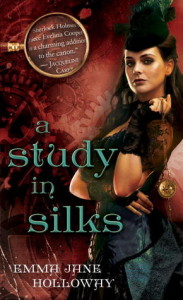 Whoever wrote the blurb copy for this book totally was aiming for me:

Evelina Cooper, The Niece of the Great Sherlock Holmes is poised to enjoy her first Season…But there’s a murder to deal with, not to mention missing automatons, a sorcerer and a talking mouse.

Though the above drew me in, the tone of the book was completely different. I came in expecting humor and snark similar to Gail Carriger’s Parasol Protectorate series, but found that the first 20 or so pages didn’t really grab me.

So I put it down for awhile and only resorted to reading it when I found myself in a situation where it was the only thing I hadn’t yet read. I’m glad I gave it another chance. I think this has the potential to be my new favorite fantasy series, depending on what happens in the next book. However, although there are really strong romantic elements, and some lovely witty flirtatious banter, this is not a romance and nor should one read it as such.

Evelina Cooper, niece of Sherlock Holmes, is about to enter her first London Season, but as companion to her friend the aristocratic Imogen Roth. Evelina’s low-class background as a former circus performer is hidden from Society, as is the fact that she is a magic user. This afterall, is a time when those accused of magic are sentenced to be guests of Queen Victoria’s Laboratories.

I really liked the friendship between Evelina and Imogen. Too often, I find that fantasy books with female protagonists rarely feature positive relationships with other women that are not sexualized. But this is not some teenage cheesy BFF situation either. Both Evelina and Imogen have their secrets and they keep them from each other, which helps ratchet up the story’s tension nicely. Evelina’s low social class background is of no concern to Imogen and yet their non-issue of it only serves to highlight the strong class divide between them.

Evelina is sneaking around one night when she discovers workmen removing a mysterious trunk from the Roth household. When the workmen take a peek against orders, Evelina gets a glimpse of a dismembered human-like automaton, which eventually goes missing. Meanwhile a servant is murdered that evening. Evelina senses magic at the murder scene and decides to investigate in order to help the Roth family avoid scandal. However, Imogen’s father, Lord Bancroft sees Sherlock Holmes’s niece more as threat and secretly orders Imogen’s brother, Tobias to seduce Evelina. However, what makes it more problematic is the fact that Tobias has recently started noticing his little sister’s friend in an entirely different manner, and she, him. But the appearance of her childhood circus friend, the Indomitable Niccolo, or Nick, as Evelina calls him, causes even more complications. Though sparks and elemental spirits literally appear when Nick and Evelina get close (because of the wild magic in both of their blood) the social class gap is too wide for them to ever even acknowledge an acquaintance in public.

The tension sizzled between Tobias and Evelina but was also there between Nick and Evelina, yet felt so very different with each one. You could feel that the chemistry changed depending on the personalities in the picture. Both Nick and Tobias are appealing, and very human with their own foibles and mistakes, and yet it seems clear at the end of the book who Evelina should end up with (though I suppose we shall see for sure in future books).

Each of the supporting characters were delightfully memorable. I liked this version of Sherlock and kept picturing Benedict Cumberbatch with a soft spot for a niece, which made him that much more likable from the asshole genius in the books. I liked the villain, Dr. Magnus a lot. Although at times, the characterization wavered into dark cloak-mustached-cartoon villain territory, Magnus consciously played into the archetype for his own purposes, which some how made him seem even more frightening. Other notable characters included the scheming fallen dreamer Lord Bancroft, Imogen’s father who is nearly ruined by the vicious Steam Baron Jasper Keating, a drama to which Evelina is unfortunately largely sidelined because of the social restrictions of her gender. Even supporting characters with no names, like bakers that Evelina runs into after defeatingsome of nasty magic, are given hints of personality that seem to echo beyond the pages that they have.

The worldbuilding is meticulous. It felt kind of like if Naomi Novik did steampunk magic Victorian London. Since this is the Season in steampunk Victorian London, there are fashionable dresses that mimic automaton brass gears with golden swirls and witty flirtations that take place around tea. Moreover, the political intrigue is delicious. The Steam Barons basically control everything in England, and their reach is only growing because of their monopoly on power. The glittering balls of the Season seem mere gloss on a Victorian England that is on the verge of civil upheaval because of the power of the Steam Barons. This is not a steampunk book that just romanticizes dawn of the technological age, but touches upon the immense social disruptions that came along with new industry. There are new social powers to be reckoned with by the old hierarchy, and if they don’t the entire edifice is on the verge of collapsing.

And although I put this book down originally because I thought it wasn’t funny, I realized it’s because the blurb made me expect something less understated. There is definitely some nice humor in this book, but subtle and pleasingly dry in that understated English way.

Evelina nodded. “The bigger the machine, the more important the merchant.” She couldn’t help thinking of Lord Bancroft’s stolen automatons, and wondering one more time what was so important about them.
Imogen looked impressed. “This one is plenty big. I wonder who owns it?”

“Someone who’s putting it there simply for show. It’s rusty.”

“Does that mean it will leave stains on my skirts while it mashes me into the dust?”

“Only if it catches you.”

Despite my reading pleasure with most of this book, I didn’t like how Evelina seemed to be a victim of events towards the end, rather than a protagonist. This book reads more like a supernatural detective mystery, hearking back to the old Sherlock Holmes stories (not surprisingly). And in this particular mystery, this wanna be detective protagonist is not the one who figured everything out. She had bits and pieces of the story, but it took her famous uncle to solve the mystery. Although Evelina did the investigating and played crucial protagonist-expected roles throughout the book, I’m surprised she didn’t contribute more towards the end. I almost feel like the story would have had her take a more active role if she were a male protagonist. You could argue that that Evelina is young and still learning to use her abilities and powers. Still, I can’t imagine Luke Skywalker not being the one to make the important shot into the Death Star or Harry Potter not discovering the truth about the Sorcerer’s Stone. Or you could argue that she’s sidelined by the gender (and social class) restrictions in the society she lives in, which is a logical argument, but as the story is a fictional construct, I felt a bit cheated as a reader that this protagonist didn’t do more. I’m just hoping Evelina does more in the next book.

Although I appreciate the mostly is nuanced representation of social class and hints of a racially diverse Victorian England than is usually represented in fiction. I had to sigh in exasperation when the only Asians that appeared were kidnapped immigrants that were there to basically add to the body count. I just felt like it was this book’s version of the black-character-dies-first-movie-trope (though the first person to die here is a white woman). Of course, Nick is a darker-skinned gypsy and he is a rather heroic love interest so I guess that balances things, but that still doesn’t quite quell my aggravation. The author did so well at world building and other character building that the use of this common trope seemed to stand out even more.

Despite some minor misgivings, I did enjoy this book. I couldn’t stop thinking about the world and characters after I finished reading. This was mostly everything I could want it to be, and I definitely look forward to the next book.