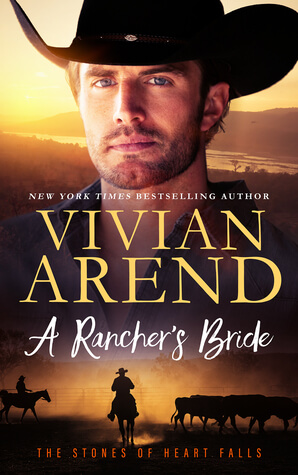 Luke Stone, the third brother of the Stones of Heart Falls, and Kelli James, senior hand at Silver Stone ranch, have been dancing around each other for a while. It’s obvious to everyone else but Luke is oblivious to it, at least on a conscious level. Kelli has long had a crush (or more) on Luke but for a long time he was engaged to Penny and therefore off limits. However, Luke and Penny split up a few months earlier so Kelli is planning to finally make her move.

In the previous books of the series, the Stone family struggled with financial issues which may lead to them having to sell their family legacy. It’s not something any of the Stone family want to do but if they can’t work out how to bring in more money, it will become a necessity. In A Rancher’s Heart, Caleb, the eldest brother, started exploring the possibility of mineral reserves which might be on the land to bring in more money. In A Rancher’s Song, Walker, the next brother, worked the rodeo circuit to help with cash flow. Luke’s skill lies with the horses. Silver Stone is developing a reputation for excellence in breeding and he’s hoping to take them to the next level.

Through a connection of his, Luke has wrangled tickets to the prestigious Triple Crown Gala, a week-long meet-and-greet/schmooze-fest where, strictly by invitation only, horse breeders and wealthy buyers get to know one another.  He’s been advised that the buyers tend to be conservative when it comes to family values and they’re wanting to meet couples or families. Luke is single but doesn’t want to miss this opportunity. With the right connections made at the TCG, Silver Stone might just have enough money to keep going without the constant threat of the family losing their home and having to start again.  Caleb and Tamara can’t go and represent the ranch because Tamara is suffering from hyperemesis gravidarum (I feel your pain Tamara, I really do) as a result of her pregnancy and Walker and Ivy can’t go because Ivy has social anxiety and a medical condition which means her immune system doesn’t cope well with new places and people. While Luke is on reasonable terms with his ex, he doesn’t really think it would be a good idea to approach Penny to go with him – she can be unpredictable and may not present the image he wants to show; an image which is actually fairly accurate it must be said – Silver Stone is a family ranch and their love for one another is at the heart of what they do. When Luke casts his mind over who would be best to go with him he immediately latches onto Kelli. She’s outgoing, smart, brilliant with horses and, having been with Silver Stone for eight years, she’s like family anyway.

Unfortunately Luke forgets to mention to Kelli that they must pretend to be engaged until they’re on their way to the TCG.

Here, the book took a rather delightful turn. Because Kelli is a straightforward plain-speaking woman and she doesn’t sit on ill feeling. She calls Luke out for not telling her earlier but, at least partly because of her feelings for him, she goes along with it. As Luke thinks to himself:

On the good side of the ledger; Kelli had not instantly taken his keys and run him over until he was dead.

Then Kelli makes her own proposal to Luke: a fling for the duration of the TCG. She’s had a crush, they’re pretending to be engaged and sharing a room and it will work in with their “cover” at the gala. Because they’re away from home, no-one else needs to know back home and they can “scratch an itch”. This is a romance and we all know that Luke and Kelli belong together and will end up living their HEA so that makes sense as a setup. It’s of course, not great planning if they’re successful in their plans to bring in lots of stud contracts from wealthy breeders as a result of the gala; people they met there will wonder why Luke and Kelli aren’t together anymore and if the other members of the Stone family look confused that won’t go down well. I didn’t let it bother me.

Kelli and Luke work extremely well together at the gala. They’re friends and have been working closely together for eight years. They address the issue of her being a Silver Stone employee early on and with open conversation. Kelli is similarly upfront about her attraction to Luke and her desires. She doesn’t try to set him up or take advantage. She just asks him if he’s interested. Consent matters to both of them. Luke is initially dumbfounded by Kelli’s offer but it doesn’t take him long for the scales to fall from his eyes. Their chemistry is off the charts and pretty soon he’s all in.

Luke might be slow but he’s not stupid. Having realised the treasure he has in Kelli, it doesn’t take him long at all to determine that a short-term fling is nowhere near enough. Kelli and he belong together. She is home to him. (*happy sigh*)

There are a number of opportunities for big misunderstandings in the novel. Fortunately, the story doesn’t take them. Kelli and Luke talk to one another. There’s a bit at the where it takes a few days to have that talk but in page time it was hardly anything and neither of them did anything stupid. I can’t tell you how much I appreciated that. The power differential between Luke and Kelli (given their respective positions on the ranch) is also addressed neatly – both the fact of it and the manner were other things I appreciated.

The series has hinted at a mystery regarding Kelli’s backstory and there’s also something about domestic abuse and some bruises on Kelli’s face some time ago (which made Luke just about lose his mind) and those things are revealed in A Rancher’s Bride as well. It is from there that much of the dramatic tension in the story comes because really, the relationship between Kelli and Luke is fairly smooth. It is completely delightful and not at all boring for all that.

I don’t know how realistic an even such as the TCG is and I didn’t care. It worked in the book and that was enough for me.

I loved that Kelli’s skills and abilities were celebrated in the story and her place at Silver Stone was very much independent of her relationship with Luke. She works hard in a non-traditional role for a woman but she is never less than. Similarly, she is not lauded as a unicorn either. She’s just Kelli.

I loved how Luke and Kelli interacted with one another; how they worked together and how Kelli stood up for herself, teaching Luke some of the nuances of what she needed. As I said earlier, their chemistry was off the charts and their intimate scenes were smoking hot.

The story tailed off a little at the end when Luke and Kelli came home from the TCG – some of it felt a bit rushed, particularly in relation to Timothy Carlyn, but otherwise, I pretty much loved it.