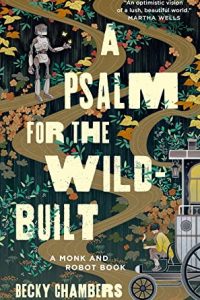 One day, the life of a tea monk is upended by the arrival of a robot, there to honor the old promise of checking in. The robot cannot go back until the question of “what do people need?” is answered.

But the answer to that question depends on who you ask, and how.

They’re going to need to ask it a lot.

I’ve seen your books published but always felt that I was behind the curve and would need to go back and start three or four books back of the one being newly released and so never began. Hmmm, that sentence was a mouthful. Anyway, since this is (I think) the beginning of a series, this was the time for me to take the plunge.

Though the blurb mentions “Earth,” either it has a new name or that’s a mistake. On a moon that orbits a planet, the land is now divided between humans and wilderness. Once humans exploited it all but after the robots that humans had built to make life easier on themselves suddenly and inexplicably gained consciousness, then decided to walk off their jobs, humans have given up half, leaving the rest to return to a natural state. That is where the robots are now and humans have had little to no contact with them. Unwilling to build and potentially risk exploiting more robots, humans have reverted to a simpler way of living, a way that is more ecological and not dependent on oil driven machinery.

Sibling Dex has been a monk focusing on plants. Unsatisfied and longing for more, they suddenly decide to change life directions. Dex doesn’t know what they want but … there has to be something else. Deciding to become a tea monk – a person who sits and waits for those in need (any kind of need) to come to them for a soothing cup of tea and a listening ear, Dex leaps straight in without an apprenticeship. Dex quickly discovers it’s not as easy as it looks but after two years, they have found a niche and serve a need. Only, they still wonder what is out beyond the edges of humanity and are there still crickets anywhere.

Another snap decision sends Dex on an abandoned road, searching for a place where crickets – elsewhere victims of humanity’s exploitation of the moon – might still survive. Something else finds Dex, something that momentarily befuddles them. Suddenly Dex and Dex’s quest are the focus of an inquisitive robot who has been sent to ask questions. A lot of them.

Wow, this is so lovely, gentle, and soothing. Yet also so heartfelt, inquisitive, and meaningful. You and I; they or us, what was and what now is; meaning and purpose; discovery of self and discovery of the other. Two beings look at and examine the other; ask and have answered questions they thought the other already knew; slowly come to understand – just a bit, the other but are still, at the end, left with more questions that they now both want to journey together to get answered.

What do humans need? As Sibling Dex replies to Mosscap, that depends. No one is the same, but all have the same basic needs. How have humans fared since robots gained consciousness and decided to leave? They’ve tried to work better with their world, sacrificing some comfort for the good of the world, not fighting nature (as much), trying to keep ecosystems in balance, allowing (a bit of) fear to keep themselves more in check. Why do humans seek purpose when they didn’t try to stop robots from leaving the purpose (to work for humans) that humans built them for? Well … that’s a good question.

In reading this novella, people will be able to see themselves. And others. And the state of the planet. There are age-old questions: what do you want, how much is enough, can you sit with a person different from you and try to understand them. Can you accept that there will be differences between yourself and others not like you? Can you acknowledge that there are similarities between yourself and someone you thought was totally different? Can you just ask questions and seek to understand? Can you learn their quirks even as you expect them to allow yours? Can you be a friend?

After a slightly slow start, the story flows along like the stream in the wild that Mosscap shows Dex – the one filled with leaves, algae, and other stuff that makes Dex gulp at the thought of drinking it. Dex has never been in the wild before and has been taught that it must be left alone unlike how humans in centuries past acted. There is awkward humor in Dex’s first encounter with a tea customer and infectious humor in Mosscap’s delight in learning about onions, chairs, and if Sibling Dex’s hair always stands on end when they wake. Going with Mosscap through a knick-knack or a collectables store would be endless joy and unending questions. But still fun!

Underneath the humor, though, are important points that could be applied to readers today. As I read it, major issues facing the world popped into my mind, as they were probably intended to. The story made me stop at times and think but I never felt an authorial index finger being wagged at me or a point belabored. Yes there is a message but it’s delivered gently. The open ending leaves the path clear for further adventures plus question and answer sessions between Dex and Mosscap. I can’t wait to read them. B+