REVIEW: A Prince on Paper by Alyssa Cole 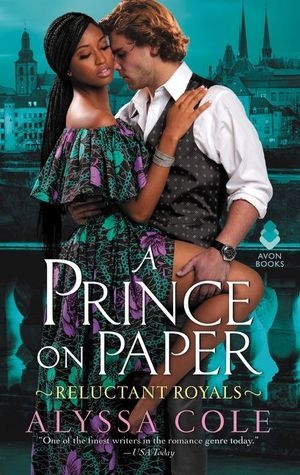 Once again you have been blessed by the cover gods. But better than that, the inside of the book lives up to the promise of that beautiful cover. A Prince on Paper was lovely.  I’m generally a hero-centric reader. And I did love Johan. But the star of this book is Nya. I just loved her. She’s had a difficult life but she’s brave and courageous and strong. She doesn’t hide even though perhaps she’d have good reason to do so. She is a no bullshit woman, telling people like it is respectfully but always standing her ground. She impressed me all the way through the book. As Johan fell in love with her, I got a bit of a girl crush.

Book three in your Reluctant Royals series, A Prince on Paper is firmly in my comfort zone of royal romance set in fictional countries. I stumbled a little in A Duke By Default because it was set in non-fictional Scotland and the actual Duke of Edinburgh kept intruding on the hot Scot fantasy for me. But both Thesolo in Africa and Liechtienbourg in Europe (which I imagine to be some kind of cross between Belgium and Lichtenstein) are completely made up so I could just relax into it.

Johan is not officially a prince. His stepfather is the King of Liechtienbourg and his stepsibling, Lukas, is the next in line to take the crown. After his mother died, in order to hide his pain from the prying eyes of the paparazzi and the public and to protect Lukas, Johan adopted the persona of “the Playboy Prince” aka “the Tabloid Prince”. Johan literally showed his ass in public to take the focus off his family, so they could live in relative peace. It wasn’t all altruistic. Part of it was also about hiding in plain sight and keeping something of himself for himself.

Still deeply scarred by the death of his beloved mother, Johan does not trust fairy tales. His experience is that there is no such thing as a HEA. He has determined to stay far from love because, to him, love means loss. If not today, then at some point certainly. He’s just not into it.

He needed to avoid the warmth her kindness kindled in him. He needed to remember that even the brightest flames could be doused in an instant, and he would never be left alone in the darkness again if he could help it.

Nya is a first cousin to the royal family of Thesolo. Her father is in prison for treason but Nya bears scars other than the embarrassment and second-hand shame of what her father did. Her father kept her in a gilded cage as a child. Keeping her inside, keeping her away from others, keeping her reliant on him, by guilt, by manipulation and also by making himself or her sick so that she’d stay and be the “good daughter”. Once her father was arrested, Nya started to spread her wings but it is really only now, two years after, that she is truly coming into her own.

Nya is inexperienced but not naive. She is shy but brave. She still struggles with a painful mix of love and hate when it comes to her father. Will she ever be able to reconcile her feelings? She loves him still; he is her father. She also knows him to be a cruel manipulator only looking after himself. In some ways, he is her Achilles Heel but she is working on it nevertheless.

When the book begins, Nya and Johan are traveling from New York to Thesolo on the royal jet to attend the wedding of Naledi and Thabiso. Only, Nya does not initially know that Johan is on the and plane and learns of his presence only after she tries to take a nap in the bed he is already occupying. Johan, for his part, has been attracted to Nya ever since he first met her two years earlier but as he is avoiding any kind of real romantic entanglement, he ignored her, pretended not to notice her and kept his distance. He’s Bad Boy Jo Jo and he falls into that persona when he needs to deflect.

When Johan awakens to Nya in his arms, he pivots to that natural deflection and propositions her. Nya is not impressed. Lacking experience and not confident in her feminine charms she thinks he’s mocking her. But even as she’s upset, she holds him to account. When he apologises (because at heart and despite the act, Johan is not actually a dick) she tells him:

“If you take a moment to think before saying offensive things to a woman, and then don’t say them, you’ll have nothing to apologize for and she won’t have to make you feel better about it.”

Oh, burn Nya!! Well played. Nya keeps Johan accountable for his own actions. She doesn’t placate to make him feel better. He has to do that work himself. And Johan finds that being held to account by Nya makes her even sexier to him. She seems to see through his act, to who he really is and, as it happens, Johan is desperate to really be seen. Perhaps it is time.

In Thesolo Nya is vulnerable because various sections of the public blame her vicariously for her father’s actions and others think she is just pathetic and weak. Johan is a protector and he sees what Nya is going through and does his best to help.

He was some kind of mythical creature, popping up whenever she was in distress to mess with her even more. Her fairy fuckboy.

Circumstances combine to land Nya and Johan in a fake engagement. I won’t go into how and why here but it does make sense in the context of the story. Nya therefore has an out from Thesolo and Johan has some good PR in the lead-up to the referendum in Liechtienbourg where the populace will decide whether or not to do away with the monarchy. There was perhaps a nod to Brexit and the UKIP campaign based in xenophobia and bigotry. I had to laugh at the name of the leader of the anti-monarchy camp – Milos Arschlocher. I see what you did there. Brava.

Nya is often mistaken for sweet or weak but she is neither of those things. Johan comes to something of a revelation about her and in doing so he begins to glimpse her worth.

He’d been wrong about her, had seen her as some timid woodland creature who might skitter too close to him if she wasn’t careful, and get caught in his snare if he wasn’t even more careful than her, but in fact she was simply kind. Nothing so benign as nice or pleasant, but kind. There was nothing soft or gentle about that trait in a world that specialized in crushing it.

Liechtienbourg has a dirty history of colonialism (not unlike many real life countries) and the book doesn’t shy away from pointing out the damage done by it. Even though I’d generally describe A Prince on Paper as light contemporary, there are heavy topics covered, with deft and precise skill. The point is made without belabouring it or turning the book preachy and the messaging felt all the more powerful because of it.

I very  much appreciated that Nya and Johan generally communicated well and didn’t allow misunderstandings or jumping to conclusions to get in their way. I love that. It always gives me confidence in a HEA when I have seen the characters talk through issues respectfully.

Nya and Johan do have baggage however and each has to work through it on their own – neither can “fix” the other.

I do love a fake relationship. It’s the modern marriage of convenience, or at least a close relation and that’s one of my favourite tropes.

The characters are smart, the writing is smooth and skillful and to my delight there was more than one nod to The Princess Bride:

Nya: I may have fallen victim to one of the classic blunders.

Ledi: I’m assuming you didn’t start a land war in Asia or cross a Sicilian. Nya, are you catching real feels? It’s only been a few days!

The female friendships are strong, the masculinity is non-toxic and consent matters, always. The sex is creative, hot and intimate. While I understood Nya’s shyness, her calling Johan’s dick his “eggplant emoji” felt a little juvenile to me. It jarred a little with my image of Nya because she was so often bold, daring and fierce. She did become more comfortable with dirty talk as the story progressed however.

There are a number of queer characters and I appreciated the representation there as well. I won’t say  more because that heads into spoiler territory.

In the end, both Nya and Johan found comfort inside their own skin. Though they did the work themselves for themselves, it is also true that they had each other as inspiration.

Perhaps the final conflict didn’t completely work for me – I got a little lost in their argument – and I personally didn’t find the emoji euphemisms to be all that sexy but they were small issues in an otherwise very happy reading experience.