Dabney and I are both fans of your work and we both enjoyed your latest Pennyroyal Green novel, A Notorious Countess Confesses. I, however, liked it more than Dabney did and thought it would be interesting to discuss the book with her. 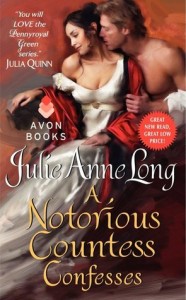 A Notorious Countess Confesses continues the pattern of the last book—it’s not about one of the Eversea or Redmond children. The hero of this book is Pennyroyal Green’s handsome vicar, Adam Sylvaine, a distant cousin of the Eversea family. Adam is grateful to have been gifted his living as a vicar. He takes his role very seriously and is honored to attend to the births, deaths, and souls of the residents of his town. The citizens of Pennyroyal Green adore him, and his unmarried status make him the subject of many of the town’s young women’s (and their hopeful mothers) dreams. The female population of Pennyroyal Green hangs on his every word when he ascends his pulpit each Sunday morning. Thus, he is truly startled and a bit put out when, one Sunday, he notices a beautiful woman nodding off during his sermon.

The unknown woman is Eve Duggan, a widowed countess, newly arrived in Pennyroyal Green. Evie has a scandalous and much gossiped about past. She once caused a duel between two young men as she tried to blink an eyelash out of her eye. Using her beauty and charm, she went from opera singer, to mistress, to the wife of the elderly Earl of Wareham, who won her hand in a card game. The Earl died due to “marital exertions” which prompted the ton to dub Evie “the Black Widow.” Eve has come to Pennyroyal Green to take up residence at Damask Manor, an unentailed property her doting husband left her. More than anything, Eve wants a quiet life, filled with friends and happiness.

Unfortunately, her reputation has preceded her to Pennyroyal Green and the women in town shun her. But Eve is accustomed to getting what she wants, and she’s determined that she will make friends in her new home. She decides to enlist Adam.

Adam is sensitive to what this “fallen” woman’s reputation could do to his own. But despite his misgivings, he agrees to help her ease her way into Pennyroyal Green society. As Eve and Adam find themselves together again and again, Adam is charmed by her grace, humor, and lack of pretense. Adam’s no virgin but it’s been a very long time since he wanted a woman and the more time he spends with Evie, the more he desires her. Evie, despite having sworn off men, is equally drawn to Adam.

Kati: I’ll be honest, I was unsure about this book. A vicar as a romantic lead? I wasn’t sure I was buying it. But as usual, the world of Pennyroyal Green drew me in and charmed me. I found that despite the fact that Adam Sylvaine was never a character that I was intrigued by, I was drawn to him. He is such an upright, truly good man. He works very hard and takes his responsibility to his parishioners seriously. When he meets Eve it’s what I call the “moth to the flame” effect. He knows she’s not good for him; that her questionable reputation is not something he should associate with. But he’s charmed by her. She is lovely, and that’s part of the attraction, but she’s also funny and honest and earnest in her wish to make friends and make a place for herself in Pennyroyal Green.

Dabney: I struggled a bit with Adam in that he seemed too perfect to me. Unlike the heroes in What I Did for a Duke or I Kissed an Earl (my two favorites in the Pennyroyal Green oeuvre), Adam was flawless. He was gorgeous, sweet, extraordinarily ethical, sexy, tall, and witty. I wish I’d seen a bit more of his pre-vicar past in order to see how he became the phenomenal man he is in A Notorious Countess Confesses. I loved his scenes at the local pub with Colin and Ian, his famously badly behaved Eversea cousins. There, he seemed a bit less faultless.

Kati: I found Eve, a character that could easily have become a caricature – the opportunistic courtesan – to be truly entertaining. She was quite self-aware, which delighted me, and I loved that she was not above attempting to use her feminine wiles to get her way, although it rarely worked with Adam.

Dabney: I too liked Eve and was pleased she didn’t slip into “hooker with a heart of gold” territory. I enjoyed her interactions with the denizens of Pennyroyal Green although I had a hard time believing some of her more explicit statements wouldn’t have irrevocably damaged her standing in the staid community. I especially liked her lack of guilt about her past. She did what she had to do to survive and she’s fine with that.

Kati: I’ll confess to being a Julie Anne Long fan girl, she’s easily the historical romance author I recommend most. Mostly it’s because her writing style is eminently readable. She writes really sharp dialogue and her characters’ internal monologue can be at times heartbreaking, emotional, and sometimes just darn funny.

Dabney: She is great with dialogue and with silences. And, you’re right, she hits just the right note between not having her characters over share yet having them give readers enough of their motivations for such revelations to be interesting.

Kati: Another thing that I enjoy about Julie Anne Long books is they are romantic. Too many times, I feel like authors work too hard try to hit the right notes, and end up missing the mark altogether. I like it when authors bring the romance, and Ms. Long tends to be an expert at it.

He leaned over and kissed her. She tasted heartbreak, and fury, and love, and infinity in that kiss. She felt the persuasion of it weave itself through her very soul, felt her body stir, felt her thoughts begin to dissolve into need. And he knew it. –Kindle location 5384 of 5749

Dabney: You say romantic, I’d add sexy. Julie Anne Long’s lovers, when they work for me (and they almost always do) are alive with passion. Even before the hero and heroine ever kiss, there is a tangible, romantic, sexual connection between the two. Many reviewers complain about “overlusting” in romance novels. In Ms. Long’s work, the lust is so integral to the love story and so embedded in the characters’ actions and words, it’s a joy to read. A Notorious Countess Confesses is a bit less steamy than many of the other books in this series, but it still tells a sexy, charming love story.

Kati: While this wasn’t my favorite of the Pennyroyal Green series, I felt that Ms. Long did move the story ahead (yes, there are several mentions of Lyon and Olivia, for those, yearning for their book, as I am). And I really enjoyed a quieter story, full of more character relationships than action. Overall, I’d give A Notorious Countess Confesses a B+.

Dabney: There were two things that kept this book from being an utter joy for me.

One, I struggled with the conclusion which I thought unbelievable and overwhelming. Prior to the last chapter, I felt Ms. Long did an admirable job of making Evie’s entry into Pennyroyal Green’s society believable. There were things that went well and things that didn’t. I liked that. It seems inherently unlikely that a small 19th century British town would embrace a known courtesan, but Ms. Long made the relationships and connections Evie created viable. That realism vanished in the last pages of the book.

[spoiler]Then, boom, it’s the last chapter and everyone stands up for her and she and Adam live happily ever after surrounded by and protecting everyone Evie ever loved. I just didn’t buy it and I felt it weakened the novel.[/spoiler]

Two, as a love-term lover of the Pennyroyal Green series, I am dissatisfied with attention Ms. Long paid to the plots she so interestingly raised and pursued in the first five books. The history between the elder Everseas and Redmonds, the role of slavery in the Everseas’ wealth, and the focus of Lyon’s journey were ignored in this book. And as for what is revealed about Lyon and Olivia, I thought it was at best disappointing and at worst distressing. I still have faith the eminently talented Ms. Long will resolve these plotlines in rewarding ways, but this book frustrated me.

I did like this book. Ms. Long is one of my very favorite writers and, even with its flaws, I’d recommend this book. I, however, would give it a B-.

→ Kati
Previous article: The hidden costs of the $0.99 ebook
Next Post: REVIEW: Yours for the Night by Samantha Hunter