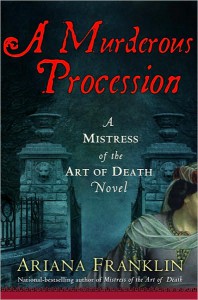 I knew there’s a reason why I love doing this blog. It’s so I can get my hands on the copy of your latest book, “A Murderous Procession” before it hits market shelves. Even though it’s book 4 of the “Mistress of the Art of Death” series, Adelia and Co are in fine form, this time for a road mystery. Too bad there’s an insane murderer there with them.

Princess Joanna of England is being married off to the King of Sicily and her father, Henry II, insists that his borrowed Mistress of the Art of Death, Adelia Aguilar, go along for the ride. No really, he insists. And when Henry wants something done, he gets it. To ensure that she comes back, he’s going to keep Adelia’s young daughter, Allie, in England. As well as sending Adelia’s lover and father of her child, Rowley Bishop of Saint Albans, along with the cavalcade. To top things off, Henry is sending a doozy of a wedding prezzie for his future s-i-l. Excalibur itself. You won’t find that on just anyone’s Bridal Registry.

So off they go, across the Channel in ships captained by the Irishman O’Donnell, then across Plantagenet held land in France – which always seems to be in some form of rebellion against Henry and usually lead by his sons, and all the way Adelia and her people are plagued by mishaps that just keep getting worse. Ulf and Mansur, and finally Rowley once somebody tells him, are convinced that there’s nothing random about these incidents but it takes Adelia longer to buy into the program. Will they discover who’s been setting them up for murder? Or will Scarry finally get his revenge for the death of his vile lover?

I love the way the book opens with a friendly little competition between two pastoral English villages. Let’s hope that their modern counterparts now forgo the kicking, kneeing and gouging displayed by the villagers. And that was just the women. Adelia and Mansur have now been in England for 7 years and by this time, they’re growing roots and developing deep ties. It’s nice to see them fairly settled. I also liked seeing Allie still interested in animals though her father is thinking of her future and determined to see her learn the feminine arts. At least that’s the excuse Rowley pulls out when Adelia learns of her latest assignment.

These two are still at each other, hammer and tongs, though obviously still in love. It seems believable that given their strong personalities and the fact that Rowley is still a Bishop, their interactions sometimes end up stormy. And Rowley is still a King’s man, first and foremost which also is still irritating to Adelia. But I like the way that she and Mansur, as they travel through other lands and kingdoms, come to see how rare is the peace that they’ve come to take for granted during their stay in England. Henry might be a f*cking force of nature whom you don’t want to cross but he does keep his tax paying subjects alive.

As well, the growing power of the Church, which Henry is trying to muzzle in England, rears its ugly head during the journey. Kudos for including the actual conflicts of the time and place to make me happy that organized religion is no longer compulsory nor limited to only one form of worship. The scenes in Aveyron chilled me to the bone. The escape scenes from Aveyron had my pulse pounding. The inclusion of the ramifications of the operation Adelia performed is also a neat nod to what brides and grooms faced on the wedding night.

I was glad to see Adelia using her forensic skills again even if one time it was to solve the death of a goat. I was sad to see how the men in her life could override her desires, though it was to keep her safe, and stifle her doctor’s voice. The frustration women must have felt, to have their voices and opinions mean little more to most men then the buzzing of moths, jumps off the page.

There are a few things which I didn’t like about the book. I got tired of Scarry’s POV parts. It’s established early on, and readers who’ve read “Grave Goods” ought to remember, that he’s evil so why the need to hammer it home? And even though I pretty much guessed her reasoning, Adelia’s refusal to believe that someone might be after her, despite all evidence to the contrary, got tiring. But then once she believed, why did she pull that TSTL little excursion in Palermo? Yes, it leads to an exciting chase through the backstreets of the city, but Good Lord! what was she thinking?

However, the ending is a fabulous cliffhanger and as I closed the book, I howled at the year long wait we face to have the questions answered and see what happens next. My feeling is that Allie will play a larger role as Adelia and Rowley grapple with her future. Is it better to educate her mind in a world that won’t accept this in women? Especially as Adelia is learning firsthand that the world that did accept her is fading fast. If only Adelia’s IQ hadn’t dropped at the end, this would be in the A range but as it is, it’s a B+.

→ Jayne
Previous article: REVIEW: The Summer of You by Kate Noble
Next Post: Thursday Midday Links: RWA Is Taking Questions