I think you’re one of the more interesting contemporary YA authors to be published in recent years. There’s an authenticity to your narrative voice that’s difficult to match. Despite their flaws, I enjoyed your previous two novels, The DUFF and Shut Out, so I snatched up your latest without hesitation. 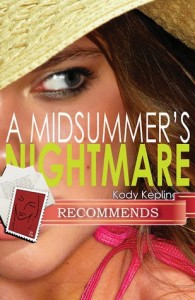 Whitley is that girl from your high school. I’m sure we can all name one. She parties hard, drinks harder, and hooks up with guys one night and drops them the next day. High school graduation means a huge bash, and there she had a one-night stand with the host. But Whitley doesn’t do relationships so when the guy asks for her number the next morning, she brushes him off and flees before the situation can get any more awkward.

To be fair, there’s a reason Whitley’s in a rush. For the past several years, summer means spending time with her father. Because her mother got custody of Whitley when her parents divorced, she only gets the chance to see her father once a year. She can’t wait to see him again and spend quality time together before she heads off to college in the fall.

Unfortunately, her father has a surprise for her. He has a fiancee now – one he never bothered to mention. Even better, his fiancee comes with two children – one of whom was her one-night stand from the graduation party. Awkward. The last guy Whitley had sex with is going to be her future step-brother.

In short, the fun summer Whitley looked forward to has been ruined. Her father doesn’t have time for her, being wrapped up in his new family. His new home is in small-town suburbia, and they don’t take kindly to Whitley’s partying ways. It’s a recipe for disaster as her father’s inattention leads to her acting out in ugly ways.

I think A Midsummer’s Nightmare might be my favorite book of yours. Whitley is a prickly, difficult heroine with many realized and fleshed out flaws, but I think that’s what makes her compelling. Her voice rings so true. She’s angry and resentful about her family life. Neither of her parents had time for her. Her mother was bitter over the divorce and the reasons leading up to it, so most of her conversations with Whitley (when she did have them) involved bad-mouthing him and trying to turn her against him. Her father was immature and enamored with the idea of being a bachelor again that he didn’t want the responsibility of taking care of a teenaged daughter. This neglect left its mark. In my opinion, this was the strongest part of the book.

It was interesting to return to the setting of The DUFF. I liked seeing the town from another perspective. Having read your debut, I honestly never got the impression that Hamilton was such a small town, but Whitley’s viewpoint certainly convinced me otherwise. And yes, readers, Bianca and Wesley have cameos here. And Harrisonon plays an even bigger role, by insinuating himself into Whitley’s life as the best friend she never wanted.

As I’ve come to expect from your novels, there continues to be a feminist bent regarding teenaged girls’ sexuality. While I like the message, I found it to be preachy in your previous novels. In this book, however, I thought it was presented in a more organic and subtle fashion. The issue isn’t so much that Whitley hooks up with lots of guys. The problem is why and the effect it’s having on her.

I also appreciated the incorporation of the cyber bullying aspect. Bullying is such a huge topic these days, but cyber bullying on social media sites like Facebook still remains in that nebulous area. In the book, Whitley blows off the creation of the Facebook page designed to slut shame her but I liked that other characters acknowledged that its existence is a problem.

The relationship between Whitley and her future step-sister, Bailey, thrilled me. Bailey’s always wanted a big sister and while Whitley certainly never wanted a little sister, she’s quickly warming up to the idea. As for Nathan, I know some people will be put off by the idea of the love interest being the step-brother but I think it helps that the two of them met before the revelation. And to be honest, stranger things have happened. (And if I recall correctly, Clueless did this as well.) If you can get around that detail, I do genuinely believe Whitley and Nathan are good for each other.

As for things I didn’t care for as much? I thought Nathan’s reformed partying ways were a little too convenient. It took multiple attempts for Whitley to clean up her act. It somehow rang false that Nathan was able to do it in the span of a couple days. While I loved the inclusion of Harrison and his butting into Whitley’s life, I wish he hadn’t fallen into such a stereotypical gay best friend role. Don’t get me wrong. He was very three-dimensional but in the end, that’s all he was and now I kind of wish we’d get a book about him too.

I found A Midsummer’s Nightmare to be the strongest of your novels so far. While the heroine is challenging and can be difficult to like, I found that to be a big part of her charm. There’s a raw honesty to her emotions that resonated with me. If you can get around the romance involving the step-brother, I think readers who like contemporary YA will find a lot to like here. B+