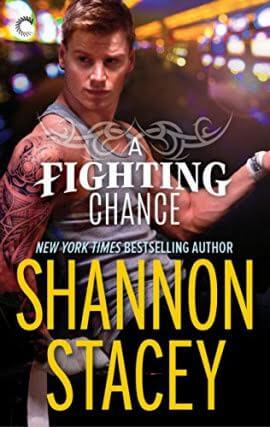 All work and no play makes Adeline Kendrick a dull girl, so when she heads to a casino resort for a friend’s bachelorette weekend, she’s ready to have a good time. Until she runs into Brendan Quinn, professional fighter and the one who got away—the one her family drove away—and things take a turn for the interesting.

Running into his ex won’t shake Brendan. Even if it brings up the old pain of loving her when she was only slumming. Even if she looks really good. In fact, what better way to get over the past than to take advantage of the still-sizzling chemistry running hot between them? He’s there to win an MMA fight, but he won’t say no to a little physical relief of a different kind.

But when the weekend is over, Adeline isn’t ready to give up her second chance that easily. Brendan is still the one for her, no matter what her family thinks. Now, if only she can convince him of that…

I’m right in the middle of reading the “Boston Fire” series but this novella, though set in New England, doesn’t appear to be in that world. Which is fine and makes me want to investigate what other books it might be linked with. Oh, and thank you editor Angela James for the heads up that there is an excerpt at the end of this novella and to watch the actual page count of the story.

I’ve discovered that I like “second chance at love stories.” Have the characters learned and grown or is the couple ready to work out what didn’t go right the first time? But I do get pissy if the reason(s) a former couple split up is/are trivial.

What immediately impressed me is that Del doesn’t roll over and get gooey eyed with the possibilities of second chances when she and Brendan met after six years apart. No, Del gives Brendan hell and cuts him no slack. She wants answers as to why he broke her heart, damn it!

It’s easy to see that both still have it bad for the other but Del waits for her answers (see above). To Brendan, and I would think a lot of men, the reason he broke things off makes sense. He didn’t feel he had anything to offer her financially and that she was slumming – something reinforced by her father – with him. It might ultimately be infuriating to women but he set her free to get better than he thought she’d get with him.

Del, of course since she’s a woman, thinks this is bullshit but can see he was serious. When he tells her that her dad also felt a break up was better for these reasons, Del calls her father on it too. Kudos that Mr. Kendrick wasn’t being a bullying asshat but genuinely didn’t think the relationship was as serious as it was and is apologetic at learning the truth. I also love that Del’s friends have her back but also have enough confidence in her to let her explore what’s happening and work things out.

Del is totally honest with Brendan about their night together and she’s sexually confident enough to go for what she wants. They have “history” and as I mentioned can see that their feelings are mutual but, and I think this is important, they want to explore a future – and have hot sex – rather than just jumping straight back into forever planning. And while the sex is sizzling, there are scenes of them together just talking and doing public social stuff.

By the end of the book, I feel they’ve worked out the issues and are ready to go. It might be a shorter novella in length but it’s complete and never feels rushed which, to me, means a well done short(er) story. B+