There’s an interesting story behind how A Delicate Affair came to be. In the early 1990s, Harlequin published a series of twelve romances each set in a different decade, mostly in the twentieth century, but featuring white authors and characters. More recently, romance author Wayne Jordan approached fellow authors about writing and publishing a similar series, but this time with a focus on African-American history. A Delicate Affair is the first book in the Decades: A Journey of African American Romance series. 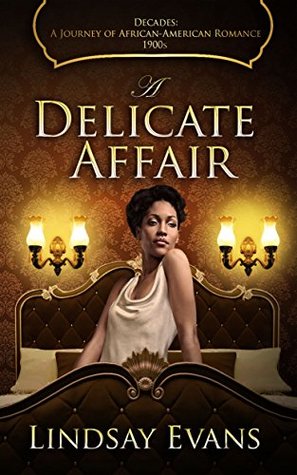 At 160 pages (according to Amazon), A Delicate Affair is on the longer side for a novella. It takes place in Washington, DC, in the year 1902, and begins in a juke joint.

Golden, a musician in the dance bar’s band (he plays more than one instrument) is approached by a girl who is obviously from a family of means. “Diamond girl,” as Golden names her, is at the juke joint with her friends and she comes up to Golden in an alley just outside the place.

The girl flirts with him in a seductive manner, but Golden suspects she has a bet with her friends that she can seduce him, and he wants no part of her. Even when she follows Golden to his apartment, he turns her away—until he remembers that she must have followed him through a rough neighborhood and backtracks to find her.

Leonie—diamond girl’s real name—is attacked, but Golden puts a stop to it just in time. Then he has to bring her to his apartment in order to patch up a wound, and after that, he insists on escorting her home.

Through it all, Golden is powerfully attracted to Leonie and tempted by her offers, but he refuses to be used by her. He wants her to see him as more than just a country boy who fell off the peach truck, and eventually, Leonie begins to.

Even then, there are powerful obstacles in their way, and difference in their classes is one of the biggest. For all of Golden’s ambition—he might work a second job as a dishwasher, but he yearns to move on to bigger and better things—choosing him may entail some sacrifices on Leonie’s part.

Then, too, Leonie’s parents have other plans for her and expectations of her, which taking up with Golden can’t fulfill. Will Leonie find the courage to break free of her parents’ hopes and dreams?

I loved a lot of things about this book, but my favorite might have been the gender role reversal. That Leonie was the one in pursuit, and also, the one with more of a financial and social position, made the book feel very fresh. There was also a coming of age element in the novel—Leonie had to grow up a bit to reach for her happiness.

The novel is written in third person and has an interesting POV structure—over 40% of the beginning is in Golden’s viewpoint, then the next 40-some percent is in Leonie’s and finally, the ending is in Golden’s POV. This was an enjoyable difference from most romances, which go back and forth more often, although I enjoyed Golden’s POV a bit more than Leonie’s.

I loved the characters; despite their youth (she’s 22, he’s 26), both had been through some difficulties in their young lives. Golden (this is not a spoiler) had nursed his mother through cancer and then barely escaped getting lynched in his Georgia hometown, and Leonie’s family had been through something painful, too.

The novel is well-written and I enjoyed the language, which mostly stuck to the period (late in the novel, I did find a couple of anachronisms in the vocabulary, “smart ass” and “touchy-feely,” which are from 1951 and 1968 respectively, but by then I was fully engaged).

I liked the figurative language, too. For example, the “diamond girl” metaphor did a terrific job of illustrating both Leonie’s glamorous appearance and the differences in their stations. You also write really well about desire and longing.

The history was also nicely done, with references to the popularity of black musicians in Europe (there is a scout trying to recruit Golden for that kind of job) and to Booker T. Washington’s visit to the White House. The racism African-Americans faced is touched on, as is the issue of colorism, and of course, class difference.

I have two quibbles, the first being that one sex scene was over the top. Not in terms of the physical acts, but just in the way it was described—there were too many superlatives and too much desperation for me to be able to buy in fully. The second is that the romance felt slightly rushed— I would have liked the characters to open up to each other a bit more before they decided they were truly in love.

The resolution to the conflict separating Leonie and Golden felt as fresh as the rest of the book, and I was really glad of the unusual approach.

This was an easy B+ for me and really worth a read. I recommend A Delicate Affair to any reader who like class difference stories, heroine in pursuit stories, coming of age stories, or historicals with a difference.

→ Janine
Previous article: REVIEW: (Not Quite) Mastering the Art of French Living by Mark Greenside
Next Post: DAILY DEALS: The Royals are coming