REVIEW: A Little Sugar, A Lot of Love by Linn Halton 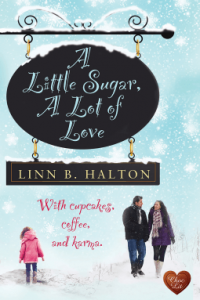 Life isn’t all love and cupcakes …
Katie has had her fair share of bad luck, but when she finally realises her dream of opening a bakery it seems things can only get better.

But the reality of running a business hits Katie hard and whilst her partner, Steve, tries to help she can’t help but feel that the situation is driving them further apart. Could Katie be set to lose her relationship and her dream job?

Then, one winter’s day, a man walks into her shop – and, in the space of that moment, the course of Katie’s life is changed.

But nobody finds happiness in the blink of an eye. Sometimes it takes two Christmases, three birthdays and a whole lot of cake to get there …

NOTE: Previously released as Sweet Occasions by the author. Revised and edited by Choc Lit December 2015.

It was the opening scene of this book which snagged me. A cold, dreary day when Katie is just going along in her life and job when a perfectly nice man suddenly enters it and everyone is … normal. No fireworks, no embarrassing meeting – at least on Katie’s part (and why must so many romances have heroine and hero meet when she’s half naked and caught in an awkward moment?). Two nice people, with ordinary jobs and life issues, who cross paths in the kind of bakery you can happily spend a half hour deciding among the yummy treats for sale. Thank goodness for the occasional book that isn’t about super secret black ops, billionaires, shifters or other out-of-the-ordinary. Every once in a while, I need down-to-earth normal with problems I can actually identify with.

She (Katie) is doing what she loves – owning a bakery but with compassion for a poor, wet soul come in out of the rain. Adam, aka poor, wet soul, is going to see his gran and buying a cake for her. Cue “aww.” He’s a bit of awkwardly endearing as he’s not one for easy social patter. He also adores his 8 year old daughter and arranges his work schedule around her. Adam definitely has the “Colin Firth playing socially inept Englishman” channeled.

Katie and her boyfriend are in a difficult place not but haven’t always been. I appreciate this as sometimes the Other Boyfriend/Girlfriend in romance books is portrayed as such a fiend from hell that I wonder how our otherwise reasonable main character ever hooked up with said monster in spite of the need to move the main character past that present relationship and on to (obviously) better things.

Adam and Katie have an abundance of people who care enough about them to question their (failed/failing) relationships and have a keen eye on what the problems are: growing apart from youthful infatuation or bullying.

Slowly but surely, Katie is beginning to question her relationship with Steve based on her times being around Adam. What is it she really wants from a significant other, is she getting that from current guy, or is there better out there? These are slightly older adults – 30s – with slightly older adult problems – aging grandparents, failed marriages/subpar relationships, childcare and raising concerns, jobs not being all they’d hoped. Normal stuff and identifiable.

Grace and her refusal to reveal her health issues to Adam rings a bell – don’t want to be a bother, have made up my mind about not pursuing further treatments, am ready to go. It sounds very familiar. Grace also has a slightly “Truly, Madly, Deeply” relationship going with her passed relatives. But this isn’t weird or scary. Instead it’s sweet.

Katie and Steve’s relationship is even more complicated by his disease and the issues arising from treatment and survival. His survival meetings lift the lid on all kinds of issues as verified and reinforced by the other group members. Steve isn’t the total asshat he initially appeared to be. There are all kinds of layers here – some of which Katie and Steve have yet to face much less dig through and deal with. I’m happy to see that Katie isn’t looking to leave Steve FOR Adam. It’s not crossed her radar. Instead she realizes that her feelings for Steve have changed and wants, means, to deal with that honestly. It makes me feel better about her that she isn’t just jumping ship but wants to do the right thing and correctly at that.

The story is about life and death. Growing up, growing on, growing old and eventually dying. I don’t feel this is trivialized or included just to try and tug heartstrings with false drama and emotion. Grace’s “visits” from her daughter and husband are calming and comforting, soothing rather than alarming. Grace has decided views on her passing. She’s a strong woman, clearheaded and thoughtful.

The first half of the book is spent setting up the issues and getting Adam and Katie to be more than just customer and baker. They talk before becoming “aware” of the other as someone more than just an acquaintance so I feel they’re really getting to know some of the deeper things, the worries and concerns about the other instead of just focusing on any physical attraction.

I also loved the way that Lily is included in the story and at the very end with her seal of approval for Katie – as well as everyone else’s.

Strangely, Grace’s manipulation of the situation – to meet Katie and engineer a romance between her and Adam – doesn’t bother me. What she’s doing truly seems motivated by love and not control or “I know best.” Plus she can tell that Adam loves Katie – he just needs a nudge. She knows she’s dealing with two adorable, quiet and rather introverted people each reluctant to reach out and worried about it being bad timing, or that there might be an other relationships, or just being reticent. I feel like a best friend – slightly exasperated at their pace and hesitation, urging them on. Rather like Grace, I guess.

Yes, the resolution and realization of attraction – and how they act on it – is Rom Com central and sweet. But then Katie does own a bakery and I did mention the whole Colin Firth thing. B+