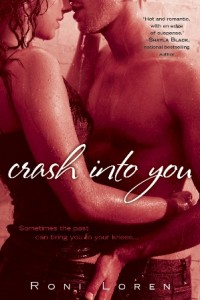 Crash Into You by Roni Loren

I was casting around for something to read, and Jane sent me the other two books in the series, Melt Into You and Fall Into You. I’m actually glad that I read them first, as I think this entry in your The Loving Edge series is the weakest. Brynn LeBreck’s sister has gone missing, and the only way that she can find her is to work with Reid Jamison, the one man who broke her heart to infiltrate The Ranch, an exclusive club where singles or couples can practice BDSM. But will Brynn be able to allow Reid, who hurt her so badly have that D/s relationship with her again? Or can she be strictly business with him? I found Brynn to be extremely wishy-washy and Reid to exert his dominance via alternating Asshat and Sweet guy tendencies. However, the sex scenes were really interesting, and I enjoyed the setting of The Ranch set-up and really enjoyed going back and meeting characters I met in other books. Final grade: C- 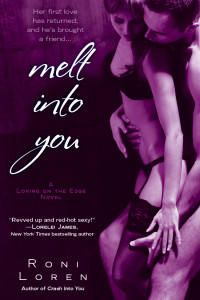 Melt Into You by Roni Loren

This was the first of The Loving Edge series that I read. Evan Kennedy and Jace Austin lived together when they were teenagers while Evan was fostering at Jace’s home. The four year age difference didn’t seem to mitigate their mutual attraction. Evan had always been troubled, but Jace was the only thing that kept her from falling into the depressing and destructive tendencies she had. But after giving in to their mutual attraction one night, and being caught by Jace’s father, Evan flees, and Jace never sees her again. That is, until he meets her at a couple’s workshop where he’s demonstrating sex toys from his shop, Wicked. Their attraction is immediate and incendiary. There’s only one problem: Evan is engaged to someone else and that someone else is who Jace needs to convince to endorse his shop. What Jace doesn’t know is that Evan is acting as a beard for her fiance, a well known radio talk show host who counsels heterosexual couples. When her fiance decides she’s a little more tightly strung than she should be, he buys her a three-month membership to The Ranch hoping that some no-strings attached sex will help her calm down. Little does he know, Jace is a Master at The Ranch, as is his best friend, Andre. Soon Evan is embarking on an extremely hot menage a trois with the men, letting them Dominate her and doing things she’s only fantasized about. As their relationship deepens, the men want Evan to leave her loveless relationship and be with them forever. But will she let go the only stability she’s ever had for what she thinks is a really hot fling?

I really liked this one. Jace and Andre are quintessential Caregiving Alphas. They are supportive, dominant and amazing in the bed. While Jace, in particular, has his bonehead moments, the reader never doubts how much he loves Evan. You also do a nice job of building the connection between Andre. So much so that I totally bought their connection, even though there was not as much groundwork laid for them. Evan was a great combination of strong and vulnerable, and I really liked how strong she was sexually. Final grade: B 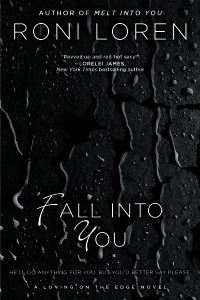 Fall into You by Roni Loren

Charli Beaumonde has a problem. She keeps getting passed over for jobs at the television station where she works. The boss says it’s because she’s not “girly” enough. The boss is also an ex-boyfriend who she dated before she worked there. But she has a solution, she’s chasing down a HUGE story that will help her get the credibility she needs as a reporter to get that coveted job. But when an attempt is made on her life on a rural road, she ends up in the home of Grant Waters, owner of the BDSM resort, The Ranch. Grant served in the military with Charli’s brother and feels responsible for keeping Charli safe. Not to mention his attraction to her. But he knows his lifestyle, which would require absolute submission from her is not a road he should go down. When Charli stumbles into a training session for submissives, though, Grant finds that he can’t resist taking her on. As they begin Charli’s training, Grant realizes not only is the a perfect sub, but she’s the perfect woman for him. This is easily my favorite of the series, thus far. Charli is submissive, but she’s also mouthy and full of attitude. She’s naturally inquisitive, and thus questions everything, which gets her into hot water with Grant on a regular basis. The sex scenes between the two are incendiary and their connection and the struggles that they have were completely believable. Final grade: B+

→ Kati
Previous article: Tuesday News: STDs on the rise for a surprising part of the population; Book scanning coupon; Sourcebooks to distribute Xcite books
Next Post: Review: How Hard Can It Be? by Robyn Peterman