Note: I had somehow thought that Sarina Bowen’s Brooklyn Bruisers series ended with book four. Anyway, I’m glad to pick it up again – here are two short(ish) reviews of books five and six. 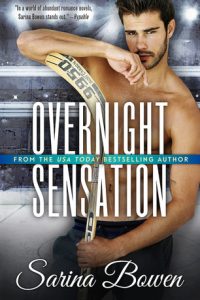 The book opens with Brooklyn Bruiser player Jason Castro at a bar with teammates. Also there is Heidi Jo Pepper, a team intern with whom Jason has shared a mutual lust since the previous season. Heidi gets drunk and comes on strong; Jason is tempted but ultimately decides Heidi is too drunk to consent. Unfortunately, the two are snapped in a compromising position outside Jason’s apartment, and the photo gets printed in the tabloids. Jason quickly discovers two things: Heidi is not even old enough to legally drink – she’s 20 – and she’s the NHL commissioner’s daughter.

Jason is 25 and scrambling for a roster spot in the pre-season. He had success in the previous hockey season, but he doesn’t yet feel assured enough in his career to be confident that he’ll stay in the majors for good. Jason comes from a happy family but suffered a life-altering tragedy when he was 18 – his high school girlfriend was killed in a car accident. As a result Jason has vowed Never to Love Again, and all of his “relationships” are of the one-night-only variety. I didn’t love Jason – he was both underdeveloped and a bit of a clichéd character.

Heidi, on the other hand, interested and engaged me. Blond, bubbly and feisty – but in a good way – Heidi fights against the expectations of her parents, especially her father. She’s been raised to be a good Southern girl, but she’s recently decided to leave Bryn Mawr without graduating. Heidi really wants to get a job working for the Brooklyn Bruisers, but so far she’s just a low-paid intern.

The fallout from Jason and Heidi’s photo debacle leads to Heidi moving out of her daddy’s penthouse apartment in Manhattan and onto the couch in the apartment Jason shares with his teammate Silas, an arrangement that is intended to be temporary. Jason has decided he doesn’t want to have anything to do with Heidi, whereas Heidi really wants the opportunity to be a bad girl for once – with Jason.

Again, I really liked Heidi much more than Jason. She ends up, for reasons I totally didn’t understand, being forced to take various intended-to-be-humbling jobs for the Bruisers as part of her internship – selling hot dogs, operating the Zamboni, filling in for the mascot. This is directed by her father both as a punishment for leaving school and to motivate her to return. Since I understood her internship to be with the team, I didn’t get why the commissioner got to decide what her duties were. I thought Heidi’s father was a controlling jerk; Heidi had more patience with him than I did.

I admired Heidi for being upbeat, determined and competent. I really like a competent heroine; I think I’ve read too many whose incompetence is played for laughs. She’s a hard worker who quickly goes from having “no marketable skills” to running a concierge business for Bruisers players, delivering groceries and dry cleaning, etc.

The relationship between Jason and Heidi unfolds fairly predictably, though I was a little surprised by Jason’s behavior in the middle of the book. It was clearly meant to set up the inevitable breakup, which seems to be a feature of 99% of the hockey romances I’ve read. I’m trying to think if it’s just contemporary romances in general, but I think hockey romances – at least the ones I’ve read – follow a formula pretty closely. And I mostly like that formula! I’m not complaining, just observing. (Okay, maybe grumbling a bit when the protagonist that I like less acts like a jerk towards the protagonist I like more.)

My grade for Overnight Sensation is between a B+ and a B. 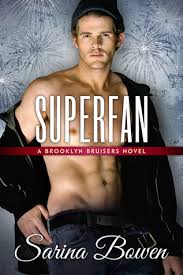 The previous book in the series, Overnight Sensation, had established Silas Kelly, roommate to that book’s hero, as a Certified Nice Guy. Silas is what we used to call a beta hero (do they still use those terms in romance?) – dependable, sweet, non-promiscuous. It was also established in that book that he was a fan of a pop singer named Delilah Spark, a fact that earned him some ribbing from his teammates. (At the time I thought maybe it was because Delilah’s music was too pop for the rock-and-rap loving athletes, but I think she’s supposed to have a strong singer-songwriter vibe, though in the real world she’d probably have to fit into the pop box to have the sort of success she seems to have had.)

What no one knows is that Silas isn’t just some anonymous superfan – he and Delilah have a history. Several years back, when Delilah’s career was just getting started, they met in Silas’s small seaside hometown in California. She was there for a music festival, and Silas was bartendering, waiting for a call from a minor league hockey team after being previously released. When the two meet at his bar, they have an instant connection, and over a couple of days form a bond. But when he stands her up on a date to take her surfing, the connection is broken. Delilah, wary of men, never gave Silas her phone number, and Silas’s plans to have a co-worker let her know that he couldn’t meet her on the beach – he had a sudden offer from a team and had to get on a plane RIGHT THEN – go awry.

Years later, Silas is a successful goalie for the Brooklyn Bruisers, and Delilah is a star. They meet over Twitter when Delilah attends a hockey game, and she agrees to a date with him, not knowing that Silas is her “Ralph” (he wore that nametag at the bar – it was an inside joke from his school days). When they do get together at her suite in a New York hotel, the connection is still there, and after clearing up some misunderstandings, they fall into bed.

Delilah’s life is kind of a mess – she has broken up with her agent/boyfriend Brett, a grade-A asshole who happens to have a bad history with Silas going back to their high school days. Brett won’t release her second album unless she signs on for another with him, something Delilah does not want to do. She’s come to realize how much control Brett had over her life and how many things she let him take care of, leaving her feeling incapable of managing things on her own.

Delilah grew up in foster care, something I wish had been given a bit more detail on the page. The ways in which she is shaped by her experiences come through, but I felt like we got more of Silas’s less-interesting backstory. Delilah is tough and wary, but she’s also…not very self-sufficient? She got involved with Brett against her best instincts because he took care of her and there was part of her that, understandably, wanted to be taken care of. Now she’s trying to stand on her own two feet but it’s not easy.

This is a mostly very sweet and conflict-free romance. Silas and Delilah have a magical interlude on a tropical island while attending Nate and Becca’s (from Brooklynaire) wedding. The conflict is external – how will the two manage to reconcile their high-pressure, opposite coast lives?

When Silas acts dumb late in the book rather than telling Delilah what was going on, I nearly threw the book across the room, except the book was on my phone and I’m not that dumb. But Silas was! It felt very unnecessary and out of step with the plot to date. Luckily the conflict didn’t last long, but it annoyed me and may have brought my grade down a smidge. Superfan was a high B+ for me.