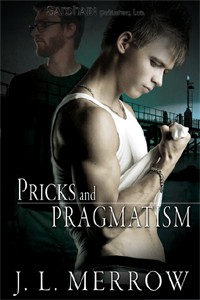 Luke is not precisely a prostitute, but he works off his rent with his ass, living with “boyfriends” in what everyone knows are purely mercenary relationships. But his current sugardaddy kicks him out three weeks before his final exams at university. And this is England, so (I think), his Finals mean comprehensive finals over all his years there (or something similar?). Anyway, really big exams and he needs stability to study. And he just lost his place to stay. Mutual friends fix him up with Russell, a geeky engineer:

I clocked Russell the minute I walked in the door of the café. He was sitting on his own at a table in the corner playing with his mug, short stubby fingers moving nervously over the china. I was almost worried to say hello in case I made him spill his drink. Tom had been right. Russell really wasn't my usual type. He was- Well, he was a bit of a geek. Actually, he was a lot of a geek. Round face and too-long mousy brown hair, although at least he'd washed it. An actual beard to match; and we're not talking a neatly trimmed goatee, either. He wore a shapeless sweater over a shirt his mum must have bought him, and glasses from Nerds'R'Us. No spots, thank God. He looked around thirty, although from what Tom had said he ought to be a lot nearer my age. Still, it wouldn't be the first time Tom had given the truth the odd nip and tuck.

Three weeks to Finals, I reminded myself. And beggars can't be choosers. So I plastered on my best cheeky smile, pulled out the chair opposite him with a scrape and sat down. He looked up, startled, and just managed not to drench me in coffee. "Hi, I'm Luke. You're Russell?"

"Er, yes," he said, like he wasn't really sure. "Nice to meet you." He didn't say anything else, just stared into his coffee cup as if helpful suggestions were going to spell themselves out on the foam on top. His fingers linked around the sides of the mug like he was giving it a cuddle. I wondered who'd taken away his security blanket. Maybe it was in the wash.

Russell takes Luke in but makes it clear that he doesn’t want sex. Luke’s not quite sure how to make that work and gets more and more upset about it the more and more he and Russell get to know each other. This was delightful to see, because Luke has no idea what’s going one and why he feels this way. I love knowing what’s wrong with a character long before they do. Things eventually, of course, and rather literally (yes, a very bad dirty joke) come to a head and everything works out, of course.

What I love about this story is that it’s not a make-over story. Luke doesn’t come into Russell’s life and make him less of a geek. Rather, Luke falls for Russell exactly as he is. I also like that Luke’s actually a bit of a prick, but he owns it and works with it. They’re real people, which is what I really enjoy seeing in romance. They don’t immediately fall on or for each other. Their attraction is not immediate and unstoppable. Love grows slowly and organically and without the characters’ knowledge.

Because it’s a first person story, there’s not much of Russell. I mean, I understood him as I was reading him from Luke’s perspective, and he’s much less complicated than Luke, so it’s possible to read him pretty easily, but still, I could have wished for a little more of him. But that’s my personal problem with first person, rather than necessarily a failing of the story itself.

I know you only write short. I wish you’d try longer, because I love your voice. A lot.