I read a handful of m/m ARCs over the past month, with varying levels of success. I either DNF’d them or didn’t have enough to say to warrant a full-blown review, so I decided a lightning-review post fit the bill. In no particular order: 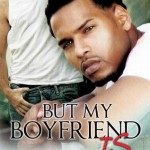 But My Boyfriend Is by K.A. Mitchell

Mitchell is an auto-buy, auto-read author for me, and this novel is a spin-off set in the Aaron & Joey world (they starred in Collision Course and are featured in No Souvenirs). Dylan Williams’ twin brother Darryl winds up in the hospital after being severely gay-bashed in a park noted for cruising and hookups. He was saved from even greater harm by Mike Aurietta, who was cutting through the park and saw the attack. Mike is gay and out. Dylan is definitely not gay, as he keeps reminding himself and everyone else, including the reader. He has a female friend-with-benefits arrangement and the occasional hookup with men. Nonetheless, he is massively attracted to Mike, who returns the favor. Dylan gives in to his urges and he and Mike become fuck buddies, with Dylan all the while reiterating that he’s not gay. In anyone else’s hands this would be a non-starter for me, but Mitchell is an extremely skilled writer, and somehow Dylan manages to be both believable and appealing.

The messy but clearly developing relationship between Dylan and Mike is alternately hindered and helped by Dylan’s family. Aaron and Joey show up to take care of Darryl, and the close bond between the twins is frayed by Dylan’s inability to be honest with Darryl and vice versa (all of which are connected to the reasons for Darryl’s attack). If you’ve read and enjoyed the earlier books, you’ll probably like seeing Aaron and Joey, and if you’re not, you should still be able to keep track of everything. The family drama is a big part of the book, though, so if you’re a reader who wants all the focus on the couple, you may get frustrated at times. I found Dylan extremely annoying on a regular basis, but I have a low threshold for the “I’m not Gay! Yes you are!” trope. Mike is terrific, but he has to spend a lot of time waiting around for Dylan to get his shit together. If you like this storyline, K.A. Mitchell does it as well as anyone if not better. But you really have to like the storyline. It’s a K.A. Mitchell book, so there is lots of enjoyable, hot sexxoring. Grade: B- 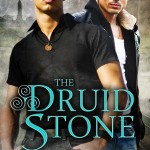 Although I don’t read much m/m fantasy and I almost never read Irish faery-laden fiction, I chose this for review because I think Belleau and Vane have a lot of talent and explore m/m romance in unusual and innovative ways. This book did not work at all for me, and I was really disappointed, because I very much wanted it to. Sean O’Hara is a half-Latino, half-Irish-American who has had an Irish curse placed on him. He relives someone else’s torture every night in his dreams and can’t escape. Finally he goes to Ireland to seek assistance from Cormac Kelly, a druid who may be able to find the origins of the curse and remove it. Sean is not gay (he may be bi, but it’s not made clear in the early chapters), while Cormac is gay and out. Nevertheless, Sean and Cormac almost immediately have the hots for each other. After a graphically violent prologue, the first chapter opens in Cormac’s village of Tuam, where Sean tracks him down. In the first section of the book Sean and Cormac meet, get to know each other a bit, figure out where the curse might have originated, and make plans to go into the supernatural realm. I don’t know much about Irish mythology, so I can’t speak to its authenticity here, but the world-building is as well done as it was in Hawaiian Gothic. The Irish, supernatural, and emotional atmosphere is thick enough to cut with a knife. The prose style is almost too much (it verges on James Kelman levels of colloquial for some characters).

And that was my problem with the book, as much as I read of it before I finally gave up: there is too much of everything. Sean is not just cursed, he also has an estranged father, a deceased mother, and a very unhappy childhood. Cormac has a tragic and unresolved past relationship. Even Cormac’s dogs have awful histories. The setting, language, and characters exude Irishness in speech, cultural beliefs, and family relationships. Sean and Cormac are complex characters, but they are burdened with so much angst. I knew from the blurb and other summaries that they were the couple and would wind up together somehow, but there wasn’t much actual romance in the first third of the book. There was bickering, and yearning, and running to and away from each other. But mostly they had to figure out the curse, so I didn’t have a lot of romantic stuff to get me past the tons of angst and mythology. After a week, I realized that I was forcing myself to try and finish the book for review, which rarely ends well. I persevered until I discovered one more angst-filled piece of Sean’s past, and that was an angst too far for me. Readers who enjoy relationships and settings like this are more likely to enjoy the book. DNF, so no grade. 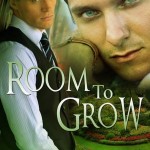 Room To Grow by Kate Sherwood

Cole Wheaton, successful landscape architect, takes on a wildly expensive garden renovation project for a wealthy couple. Little does he know that the husband, David, has been struggling with his sexuality, and the garden becomes the tipping point for him to leave his wife Stephanie and come out of the closet. Cole and David are drawn to each other, but Cole has been burned by closeted types before. He’s willing to have David as a friend but he refuses to play Transitional Man. So far, so good. I like the garden aspect (I did not know you could spend $400,000 on trees alone for a private estate renovation), and I appreciated that no one was Gay For You or immediately in a relationship. And Stephanie was a very nice woman who coped realistically with David’s decision (especially given that David was an executive in her family’s company). But then, as the plot unfolded, the air of unreality ratcheted up. It makes sense to avoid emotional involvement with someone who’s just come out. But for two men in their late twenties/early thirties to put off having sex until the perfect moment that will launch their relationship? And having a fairly long conversation about waiting for that perfect moment? That was a little much for me.

And then, when they do finally do the deed, there is immediately a post-deed crisis that requires David’s full attention. Cole, who has been the sensible grownup of the couple up to now, jumps to the conclusion that David doesn’t care about him after all because David hasn’t called him. At this point my eyes roll back in my head. But then they talk it all out, and they realize everything is really OK, and then they become a total couple and everyone accepts them and they live happily ever after. Ms. Sherwood writes smoothly, and the characters are mostly sympathetic and mature. If they had talked about their feelings less (or less articulately), I probably would have enjoyed the book much more. It’s not that I think men don’t talk about their feelings, I just don’t know many that talk like this or at this length. I know, it’s fantasy. But for me to get caught up in a story, there has to be a threshold level of believability in the characters’ actions and responses. Grade: C- 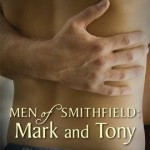 Men of Smithfield: Mark and Tony by L.B. Gregg

This is a re-edited reissue of L.B. Gregg’s novel Gobsmacked, now with a new cover. The short novel opens with a bang, as Mark Meehan smacks his live-in boyfriend, Jamie DuPree, upside the head with a Bible during an Ash Wednesday church service. But catching Jamie in bed with their weird-smelling landlord Kevin turns out to be the least of Jamie’s many transgressions. Mark turns to his old friend and state trooper, Tony Gervase, for assistance and discovers all kinds of bad surprises about Jamie and good surprises about Tony.

Mark is an utterly appealing narrator and Tony makes an excellent foil and partner for him. Since they’ve known each other for many years and have a history, there’s no insta-love to deal with, and it was refreshing to read about two men who were gay and out and comfortable with it. I especially enjoyed Gregg’s depiction of Smithfield. It’s a small town where everyone knows everything about everybody, but it is neither idealized nor vilified. The sex scenes are hot, well written, and integral to the plot, and the balance between the funny and the serious is very well done, and the serious parts aren’t just played for laughs. There are three more books in the series and I look forward to reading them all. I didn’t read the original release, so I can’t say how different this version is from the original, but there is an author’s note that clearly states that the books are revised and reissued. Grade: B+

→ Sunita
Previous article: Debut Print Book: Hiding His Witness by C. J. Miller
Next Post: Thursday News: Emily Giffin stirs up a sh!storm; US Navy SEAL reveals all (and not in a good way); Katherine Hawkins’ cover appropriated by another author