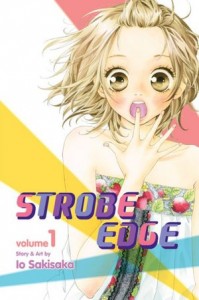 In my ongoing quest to reacquaint myself with the shoujo genre, I stumbled across this new title from Viz. The series completed its run in Japan in 2010 but was just officially published in English this month. While straight up romance manga is typically not my thing, I decided to give this a go since I heard good things about it.

Ninako Kinoshita is a sweet girl, who unfortunately is very naïve. She tends to take people at their word, even when she shouldn’t. For example, she buys a sales pitch as absolute truth rather than realizing it was a marketing ploy. Normally, this character type annoys me but Ninako is just so nice. Disliking her is on par with kicking a puppy. I can’t do it.

It helps that her innocence is simultaneously charming and awkward. This is exemplified by her views on love. Ninako has never experienced love and has no idea how to identify it. She has a childhood friend, Daiki, who she spends a lot of time with and who is obviously interested in taking their relationship beyond the platonic. She likes him a great deal, and her circle of friends has been encouraging her to go out with him for a while. As a result, Ninako has half-convinced herself that she must be in love with Daiki.

Then one day she has a close encounter with the most popular boy in school, Ren Ichinose. Ren is basically the school idol. The girls all adore him but from afar. No one has a chance with him. But thanks to a series of events, Ninako crosses that invisible boundary and finds herself interacting with Ren. And the more she gets to know him, the more she realizes what love truly is.

This is the first volume of a ten volume series so as with most manga series, I consider this installment to be more of an introduction to the characters and set-up. That said, I thought it did a great job allowing the story to unfold at its own pace while also avoiding the long, dragged out plot devices used to heighten drama. For example, it’d be easy to set up a love triangle between Daiki and Ren but the manga doesn’t go there. Daiki is eliminated as a potential love interest early on, as Ninako decides to remain true to her love for Ren, even while knowing that he is unavailable.

It’s a decision that I consider to be very in-character for Ninako. As sweet and kind as she is, I can’t see her agreeing to date someone while being in love with someone else, even if that person is unavailable. She just wants to enjoy that love for what it is, for as long as it lasts. It’s a very pure and innocent look on love, and I think that’s part of this manga’s appeal.

Ren is also not the character I was expecting. Maybe I’ve been reading the wrong titles but I’m used to the popular boy being kind of a jerk and bad boy. With a heroine like Ninako, I was afraid we’d end up with an asshole hero who’d bully her. But Ren’s none of these things. He’s quiet and aloof. And through his interactions with Ninako, we also see that he’s kind and thoughtful. I liked this a lot.

Sweet is the best adjective to describe Strobe Edge. It doesn’t rely on melodrama or over the top hijinks to make a compelling story. Instead it follows the story of girl learning what it means to love someone, as well as what happens when your feelings are unrequited. The events that occur within the story are things that can happen in your everyday life. Don’t let the admittedly cliché premise fool you. This is a manga where execution matters and characterization makes a world of difference. Strobe Edge delivers on all fronts. B+