Janine: Rose and I read Lady Winderemere’s Lover, the third book in Miranda Neville’s Wild Quartet series, around the same time, so we decided to review the book together. 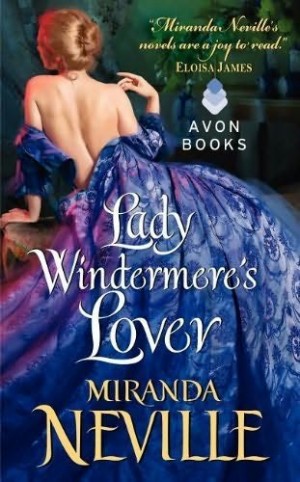 Rose: On his 21st birthday, Damian inherited his late mother’s property Beaulieu – only to promptly lose it to his friend Robert in a drunken wager. By the time Damian recovers from his stupor, Robert himself has lost the property. Horrified by his actions and upset with Robert and their friend Julian, who had done nothing to stop the events from unfolding, Damian confesses all to his father, and decides to break away from his friends and enter the foreign service.

Several years later, Damian, now Lord Windermere, is finally able to regain Beaulieu, but at a steep price: he must wed Cynthia Chorley, the niece of the prosperous Birmingham merchant who owns the estate.

In the short time the two spend together, Damian is resentful and cold to Cynthia, who lacks the skills and polish he considers valuable for a diplomat’s wife. He accepts a posting to Persia and leaves Cynthia behind, a provincial nobody with few friends and no connections in society. Eventually she is befriended by Robert’s young widow, Caro Townsend, who takes her under her wing and introduces her to what is considered a fairly fast artistic set.

Janine: Cynthia also acquires elegant clothes and town polish. She allows Julian to court her – whether because she’s drawn to Julian or because she hopes Damian will hear rumors that will irk him into coming home, Cynthia herself doesn’t know.

As it happens, Damian does return, but at the Foreign Office’s request. There is now a great deal of bad blood between Damian and Julian, but Damian doesn’t yet know Cynthia has become involved in the conflict.

Damian’s superior orders him to do everything possible to help the crown acquire an art collection thought to be in Julian’s possession, so Damian must make nice with Julian whether or not he likes it.

That night, Damian attends he theater with a former mistress, Lady Belinda. Seated across from them are Julian and Cynthia, who erroneously assumes Belinda and Damian are still lovers. Damian doesn’t recognize Cynthia until he returns home to witness an embrace between her and Julian in Julian’s adjoining garden. Damian leaves the house unseen and resolves to get the paintings from Julian and only then confront his wife and the ex-friend he thinks is her lover.

To Damian’s credit, he knows his treatment of Cynthia has been shabby, and as their history is revealed in flashbacks, we see just how much. Damian insisted on speaking only French to Cynthia as a way of putting distance between them, and he didn’t exert himself much in the bedroom. Two weeks into their marriage, he left his wife, little realizing she was pregnant.

Cynthia wrote to Damian about her pregnancy and subsequent miscarriage, but his reply was perfunctory and distant, and Caro and her friends were Cynthia’s only real source of support.

Now Damian moves back into his house, and to wait until he’s certain she isn’t carrying Julian’s child yet prevent anymore illicit trysts, he claims his mattress is uncomfortable and he share hers. As the two lie next to each other for a few nights, they become better acquainted. Damian realizes Cynthia’s not the grasping social climber he thought. Cynthia, too, is attracted to her spouse, and tempted to begin to like him.

But can they overlook the “affairs” each thinks the other is having? Can they heal the wounds of the past? And will Julian stand by while their marriage gets stronger, or will he interfere?

Rose: Obviously, there is a lot here for both the hero and the heroine to work through and some way for them to go in order to build any sort of relationship or to trust one another.

Janine: Yes. It wasn’t until I started writing this plot summary that I realized how many issues complicate Cynthia and Damian’s marriage. One thing we didn’t go into is how gambling Beaulieu away led Damian to shut down emotionally. His Foreign Office mentor then taught him not to reveal his feelings. I thought that aspect of Damian was really well done.

Rose: I liked that Cynthia had not spent her time alone being miserable: she worked hard to improve her taste, her facility with languages, and her social skills, and has acquired a circle of friends along with considerable poise and polish. Julian tempts her, but not enough to stray from her wedding vows – though she does come close.

Janine: I liked that too. I was reminded of a totally different book with a similar plot, Judith McNaught’s Something Wonderful. That book too has an abandoned wife who blossoms into a sought-after beauty just as her husband return from a long absence. The two books couldn’t be more different, but there’s a great “She showed him!” satisfaction to the trope itself.

Rose: There really is. In this case, Cynthia also finds time for charitable works, and sets up a home for young unwed mothers. This is financed by having a merchant overcharge her for hideous furniture and art for Damian’s home and her pocketing the change, which was an entertaining form of revenge on her part.

Janine: Agreed. I’ve gotten cynical about heroines with charitable works but Cynthia’s very personal reasons for empathizing with the unwed mothers and feeling responsible for their fates made this aspect of her character work.

Rose: I’m not sure that the timeframe quite makes sense for the transformation that Cynthia underwent, or allows enough time for travel and the letters that went back and forth between Cynthia and Damian, but I decided to accept it as it was.

Janine: Good point that Cynthia’s transformation happens a bit too quickly. However I think if Damian had abandoned her for two or more years, I would have found it almost impossible to forgive him.

Rose: Cynthia is attracted to Damian, but he has treated her very badly and his efforts to make amends are at first driven mainly by his desire to keep her away from Julian. As the book progressed, I began to feel that Damian’s insistence on clinging to the belief that Cynthia had wronged him had gone too far; for a supposedly astute diplomat, he was rather obtuse.

Janine: I didn’t feel that way since evidence against Cynthia kept piling up.

Between seeing Cynthia and Julian attend the theater alone together, witnessing them share a “tender embrace” in the garden, discovering a financial scheme the two crafted together, catching them in what appeared to be another meeting, knowing their houses adjoined and knowing Julian’s reputation, as well as knowing how badly he himself treated Cynthia, I felt Damian had solid enough reasons for reaching that conclusion.

Rose: At the same time, I could accept Cynthia’s attraction to her husband but had more difficulty accepting any further depth of feeling considering his treatment of her.

Janine: I wasn’t sure Damian entirely deserved Cynthia’s forgiveness, but I could accept her developing feelings for him because (A) he started treating her so much better , (B) she couldn’t have found a another husband without the scandal of divorce and (C) a lot of women find it hard to separate sex and love. Those may not be the best reasons for loving one’s husband, but they are reason enough to give him a chance to prove himself, which Damian did.

With all that said, I would have liked to see Damian work for it even harder than he did.

Rose: I would have liked that as well. Damian does eventually come to his senses and realize that he has wronged his wife, but it takes some time before this is reflected in the way he treats her (though with less external intervention than I’d expected, which was good).

Janine: I thought he knew he wronged her pretty early on, but putting his heart on the line is what took him longer.

Rose: Something I appreciate in Neville’s writing is that her characters usually have interests that play a large part in the books – rare books and politics in her Burgundy Club series, art and archaeology in her current series. Both Cynthia and Damian enjoy art and draw as a hobby, Damian with some talent; the portraits they draw of one another at different stages in the narrative show how their perceptions of the other change over time.

Janine: Yes. I also liked that art was an interest Damian and Julian shared. Despite Julian’s role as the spoke in the wheel of Damian and Cynthia’s relationship, I was glad of the way Damian’s conflict with Julian got somewhat resolved.

One work of art I could’ve done without was the pictorial sex manual Damian brought back with him from Persia. Has there ever been an Englishman who visited a gulf state in a historical romance without bringing back a Kama Sutra style book? I don’t know if the sex manual in this novel was based on a real one or not, but it’s still a cliché and a stereotypical one at that.

Rose: Maybe one or two… she also included a pornographic European book in a previous novel, so maybe it’s just something she likes to throw in on occasion?

Ultimately, I felt that Cynthia and Damian were headed in the right direction at the end, but they still had quite a bit to work through when Neville threw in a wholly unnecessary (and fortunately brief) plot twist. This is not the first of her books to feature what I considered a fairly unneeded suspense subplot, and I wish she’d leave those out; the stories rarely need them. In this case, the plot twist mainly serves to set up the next novel in the series, and has little purpose in the resolution of this one.

I thought this plot turn served to help resolve the Damian/Julian conflict as well as to push Damian to make a romantic declaration to Cynthia.
It worked for me.

What did you think of the appearances or mentions of characters from the other books in the Wild Quartet series? I liked seeing them and I thought the characters we saw on stage were well integrated into the storyline, but there were enough of them that I also wondered if a reader who hadn’t read the earlier books would be lost.

Rose: Other than Julian, who is really necessary for the story to work, I felt that past characters didn’t play so large a role as to confuse new readers. I see the Wild Quartet as being not only the romance but also the characters repairing their relationships with each other – they had been very close once, and their lives apart were really quite lonely. So it makes sense to me that their stories aren’t only about the romantic relationships but also about rebuilding their friendships and trust.

Janine: “Lost” might not have been the best word for me to use, but I think this is the kind of series I’d rather read in order.  I look forward to Julian’s upcoming book, The Duke of Dark Desires.

Rose: My issues with some of the pacing of Damian and Cynthia’s relationship, as well as the resolution, kept this book out of the A-range for me, but it was an enjoyable read and I wouldn’t hesitate to recommend it. My grade is a B+.

Janine: It’s a B and a recommended read for me.