Recently, Jane forwarded a review request email from Entangled’s publicist for Susanna Fraser’s story Christmas Past to the DA loop, and Sunita and I both expressed interest in it. We decided to review the story together. –Janine

Janine: Christmas Past begins on Christmas Eve of 1810. Our heroine, Sydney, is in Lisbon, facing up to the fact that the temporal engine of her time machine is broken. Sydney, a time-traveling PhD student from our own time, was supposed to arrive safely in 2013 with the aid of her time machine’s fail-safe, an auto-recall function that brings time travelers home if even a hint of damage to the timeline appears. 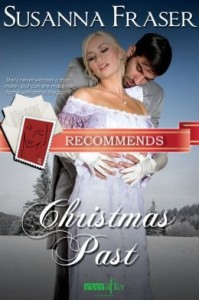 Now the fail-safe has failed, and Sydney is stuck in 1810. This means that, in order to refrain from changing the future beyond recognition, Sydney must kill herself. It’s not a simple choice because Sydney has loving parents, a married sister, and an adorable three year old niece in 2013. If she chooses to stay alive in 1810, it is possible that all of them will cease to exist.

Before Sydney can swallow the poison she brought with her, Captain Miles Griffin intervenes. Captain Griffin is an attractive officer in the British army, with whom Sydney had spoken at the hospital where she volunteered as a nurse when he came there to visit the wounded men of his regiment.

Sydney tries to convince Miles that her time machine is only a carriage—after all, its exterior looks like one—but she is too late. Miles has seen her iPad which seems an amazing marvel to him.

Sydney has no choice but to come out with the truth, but when Captain Griffin hears that she means to kill herself, he resolves to do everything in his power to dissuade her. He convinces her to spend another day and night in 1810, and invites her to attend a Christmas dinner with officers from the King’s German Legion along with him.

After hesitating, Sydney agrees to 24 hours more, and decides to spend the night with Miles, too—since it will be her last on earth. Can Miles persuade her to spend many more days and nights with him, before it’s too late?

When I agreed to review this story, I didn’t realize how short it was – only 39 pages. Still, I’m very glad I took it up, because it’s been a frustrating reading year for me, but this story was thoroughly enjoyable.

Sunita: I really enjoyed it too. I peeked to see how long it was, so I was more prepared, and I approached it like a Christmas anthology story. That helped, both in having a sense of how quickly the story would have to move, and in the other-worldly sense of it.

Janine: The Christmas anthology story is a good comparison. Christmas Past does have a similar otherworldliness to it, and it moves at a fast clip.

I thought the world-building aspects were handled well for the most part. I loved the idea of the PhD program Sydney attended, a Historical Epidemiology program at the University of Washington which sent its PhD students to research the past. I loved the idea of a National Institute for Temporal Research, too.

These things reminded me of Connie Willis’ The Doomsday Book, in which a university student goes back in time to study the past, but whereas that novel felt really slow to me, this was a tight, focused story that got right to the compelling central conflict.

Sunita: I also enjoyed the backstory about why the time-travel takes place. In so many books it just happens, or it’s because of magic. Here it’s explained in a way that makes sense without entirely losing the magic element. That makes it believable and interesting to me.

I thought the way in which the time travel explained might have been a bit too elaborate, though. I bought the science aspect enough that when it changed at the end, I was less willing to go along than I might have been if I had had to suspend more disbelief, if that makes sense. But overall, I liked the approach and world-building very much.

Janine: I had an issue with that too. Early on, it is stated in Sydney’s POV that she can’t know with certainty whether every change in the timeline creates a new multiverse, while at another point in the story she seems to have reached a conclusion on that, and I wasn’t clear on how she had arrived at that conclusion. I wish it had been explained and supported better.

The other quibble I have is that there was a protocol guiding Sydney and the other time travelers, but it seemed like this protocol didn’t make provisions for situations like the one Sydney found herself in. Initially at first, I found this frustrating – if time travel was such serious business, wouldn’t the National Institute of Temporal Research have come up with rules to cover every potential eventuality?

But overall, I really, really liked the world of this book, and I hope Ms. Fraser writes more in this vein. I’d love to read about some of Sydney’s fellow time travelers, and even about her professor.

Sunita: Given how carefully the science was set up, I found it hard to believe they hadn’t come up with multiple fail-safes. Sydney’s need to make a sacrifice seemed a bit over the top to me.

In addition, while I think the idea that every single thing we do in time-travel can change the past is believable, the probability that our actions will change key aspects of the future is not that high. And normatively, it’s not clear to me that the changes we make are necessarily worse than the chance elements that cause changes in the same time frame. After all, if time-travel is possible, then it’s part of our world and should be accepted.

But that’s a larger philosophical question, and the fact that I even bring it up suggests that Fraser goes a long way to making this scenario plausible for me.

Janine: I have philosophical questions too, but they are less profound. Like, how come most time travelers in romance are women who typically travel to the past, and on the rare occasion when we get a time-traveling man, that hero goes forward in time?

Regardless, the romance in this story was very sweet. Sydney was immediately relatable and likeable, because she faced such a serious conflict and wanted to make an ethical decision that would preserve the lives of her loved ones. I also understood her better because I share her time.

Miles took longer to get to know, but by the end of the story I liked him quite a bit. I liked that he was attracted to Sydney and her different aspects, and while some of her mores surprised him, he didn’t judge her for them.

Sunita: I felt as if I understood and got to know Sydney much more than Miles. It was really her story, for obvious reasons, and Miles stayed a bit of a cipher for me. I put most of that down to the length of the novella, but I would have liked to know Miles better.

Janine: I agree with that—it was Sydney’s story, but that feels appropriate to the length of the story. A little more insight into Miles would have been welcome.

On another topic, although this story has a happy ending, there was also poignancy to it that I appreciated. Saying goodbye to your own time cannot be easy, and I loved that this was acknowledged here.

I enjoyed A Christmas Past significantly more than the Fraser romance I read and reviewed with you in the past, A Marriage of Inconvenience. I’m sincere in my hope that Ms. Fraser write us more time-travel stories. My grade for Christmas Past is a B/B+.

Sunita: I always look forward to Fraser’s novels and novellas. While they don’t all work fully, there is so much that is thoughtful and intelligent that she’s always an auto-buy author for me. And I agree, I’d love to read another time-travel from her! Grade: B.