As promised, here are the first of my reviews of books published in the US Harlequin Medical line. Both are set in the UK.

, by Kate Hardy. Amy Rivers is a successful neurosurgeon, but a difficult operation has caused her to doubt her skill and suitability for the profession for which she has sacrificed a great deal. She takes a leave from her London practice and goes to her aunt and uncle’s home in a coastal Norfolk village in order to recover and regroup. She has to share the large house with a newly arrived GP, Tom Ashby, a widower and single parent who is staying there while he fills in for Amy's uncle as a locum during their trip abroad. Amy is standoffish and self-protective at first, but she and Tom are soon attracted to each other, and Amy reluctantly feels a strong kinship with Tom’s 8-year-old daughter, Perdy. Tom and Perdy have their own issues to deal with, and they has moved to the village to try and begin a new life. 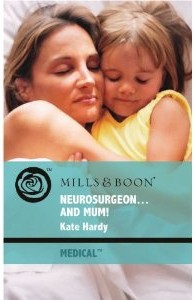 This is a sweet and gentle story which seemed slow in the beginning but really captivated me as I kept reading. It’s nice to see a heroine who has a higher-status job than the hero in the same profession, and it’s even more unusual to encounter a hero who seems utterly comfortable with it. Tom is a great beta hero. He worries about his daughter, he listens to his patients and he tries to be considerate of Amy’s wish for privacy and emotional distance even as he’s growing increasingly attracted to her. At first, the prospect of Amy and Tom getting together under the same roof as Perdy squicked me out, but Ms. Hardy is a very good writer, and she pulls it off. Amy and Tom are careful to behave only as friends in front of Perdy, and they constantly think of her feelings as their relationship deepens. There are a couple of very good sex scenes, and the relationship progresses over the course of a couple of months.

This is a pretty realistic, down to earth story with characters who could live next door to you, and with whom I would happily have dinner. The hurdles Amy and Tom face in terms of Amy's decisions about her professional life, deciding whether they are committed enough to move forward as a family, and the lingering effects of their past relationships are dealt with very well. As usual, Ms. Hardy puts a lot of medical information and terminology into the novel. At times these scenes feel way too long and didactic (such as when Tom is meeting with a patient who may have diabetes), but at others the discussions are the way Tom and Amy connect and clearly propel the story along.

The book flagged a bit for me in the final chapters, when the focus turned to the various problems being solved. This may in part be because Amy and Tom clearly loved each other by then, so it was just a question of how they would get together. Nevertheless, the lovely characterizations of the main characters, the realistic feel of the setting and the storyline, and Ms. Hardy's usual excellent writing made this a very enjoyable read. Grade: B+.

This book can be purchased digitally or in paper via Book Depository.

, by Anne Fraser. Rose Taylor has taken leave from her position as a practice nurse in Edinburgh to take care of her parents during her father’s convalescence. She finds a temporary receptionist position in Harley Street, where the GP turns out to be an aristocratic playboy with a long list of rich and famous patients. Rose can’t imagine she has anything in common with Dr. Jonathan Cavendish, but as she works with him she finds that there is substance beneath the party faÃ§ade. Nevertheless, she is afraid to allow the relationship to develop, both because their lives are so different, and because of the secret she is keeping, a secret which will determine the course of her future. 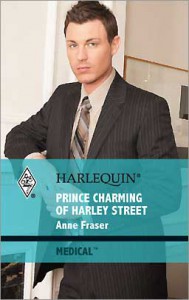 I have enjoyed a couple of Fraser’s previous books (including one Jayne reviewed favorably here
), but this one fell flat for me. I never really connected with either of the characters, and I couldn’t figure out what made Rose fall in love with Jonathan. Yes, he was rich, titled, and handsome, but that’s not supposed to be enough in a category romance. He never really did anything that convinced me he had transcended her initial antagonism toward his lifestyle and his apparently cavalier attitude toward his profession (at one point Rose thinks of him as Little Lord Fauntleroy, which was hilarious and apt). We discover over the course of the book that he does like and respect his rich, sometimes spoiled patients, and he treats them with care and consideration, but that strikes me as a relatively low threshold for heroism. Jonathan tells Rose that meeting her has made him want to give up his partying ways, but I didn’t really feel the change in him. He struck me as a superficial but decent guy, relatively unformed at this point, but who had a chance to grow up to be a somewhat dull but worthy person. I found Rose to be a slightly more interesting character than Jonathan, especially in her relationship with her parents, but she was also kind of blah (despite her singer-songwriter talents) I did enjoy the scenes with Rose, her parents, and Jonathan, especially Jonathan’s efforts for Rose’s father. They seemed both genuine and in character.

Part of my problem with the book is the writing style, which employs somewhat melodramatic language when Rose is thinking about her difficulties, but which can be almost flat and unemotional when Rose and Jonathan are talking to each other. And when Jonathan’s father is talking to Rose near the end of the book and telling her how she resembles Jonathan’s mother, I read it but I couldn’t feel it. But I think that the main flaw is that I never felt that there was something essential between Rose and Jonathan which made them look at each other and think, “This is it.” Oh well. Grade: C.