HALLOWEEN 2-in-1 REVIEW : I Fell In Love With A Zombie by Sean Kennedy and Mummy Dearest by Josh Lanyon

I am not a big fan of Halloween, except for the seeing the small fry in costume, of course, but I do enjoy a zombie, ghost, or other creature-centric story around this time of year. When I saw that Josh Lanyon had just released a novella called Mummy Dearest, I couldn’t resist, and I thought it might pair well with a zombie novella by Sean Kennedy that was calling to me in my TBR (because really, what doesn’t go well with zombies?). 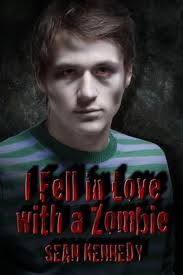 I’ve been known to describe your first novel, Tigers and Devils, as Nick Hornby meets Shaun of the Dead, even though there are no zombies wandering its Melbourne setting (the friend/family relationships remind me of those in the movie). I Fell In Love With A Zombie shares Shaun‘s zombie-filled setting but is set in a more grim and less populated landscape. Jay is the sole survivor among his friends, family, and neighbors after a flu-like virus sweeps through the land and kills a majority of the inhabitants. Even more cruelly, all the dead don’t stay dead; some return as hungry, violent and freakishly strong creatures. Jay has lost his partner, Mike, to the virus, and he hasn’t heard from his parents or his brother’s family, and now he’s running out of food and fuel. He fends off a zombie attack, uses his newly acquired survival skills to hotwire a car, and sets off into the country. On his journey he meets more zombies, a few humans in similar straits to his, and a lot of desolate, abandoned countryside. But by the end of the story he’s not alone, and while the future is uncertain, the fragile HFN feels almost optimistic.

This is at times a brutal, violent, and deeply sad story. But in your hands, Jay’s essential decency and desire to keep going light the darker aspects and keep the reader hoping that something good will come to him. Part of this feeling stems from the prose style. For the first few chapters of the book there is no dialogue, just Jay’s first person POV, and except for one sequence he bears most of the burden of conversation and exposition. This is a tricky feat to pull off, because the narrator’s voice becomes even more crucially important than in usual first person. But I took to Jay’s voice immediately and although I’m generally kind of squeamish, I was so caught up in the story I didn’t even have to read by squinting through my fingers. As he prepared to leave behind everything he knew, Jay’s matter-of-fact voice conveyed how quickly his nightmarish existence had become normal:

I hoped zombies were late sleepers, took one last look around my house, saying goodbye to all my familiar things, and walked out the door. I hoped maybe one day I could return, but shrugged it off. Even if things got better, I would want to start life somewhere new, where memories of Mike, my family and my friends wouldn’t haunt me everywhere I turned.

I knew my own gas tank was empty, so I headed across the street to where the Davisons lived. They were a responsible yuppie family, with a double income and two kids. They had also been the first to die on our street. I was home from work, looking after Mike, when I saw the ambulance arrive and cart their bodies away, sealed up in hazmat bags.

Anyway. They would surely have a full tank. They were that kind of people.

Jay encounters another uninfected human just when he needs help, but it turns out to be a mixed blessing (to put it mildly). They provide each other a respite from their aching loneliness, but it can’t be called pleasant. Jay finds that his unresolved grief for Mike is even more painful to bear in the company of strangers than his loneliness, and he doesn’t trust this new situation. So he moves on, through the post-apocalyptic landscape, boosting cars until they run out of fuel and fending off more zombies. Just when he thinks he is about to run out of luck, he meets a zombie who doesn’t want to kill or eat him, for the most surprising of reasons, and this exception to apparent “zombie law” makes Jay wonder if the effects of the virus have been fundamentally misdiagnosed. To give too many details would spoil the story, so I’ll just say that Jay and his zombie reach a satisfying level of understanding and companionship, and while they have to continue moving on, they do so together, eventually adding a third member to their little party.

There are a number of layers to this short novel. I don’t think there’s much that is new, but key aspects of the context and the questions raised by the transformation are dealt with thoughtfully and sometimes in unexpected ways. The road trip reminded me of scenes from Children of Men more than, say, Mad Max, perhaps because there still seems to be hope among the devastation and loneliness. Jay has an essentially sunny disposition that somehow manages to endure despite so much evidence to the contrary. There is one essential, painful, and extremely unromantic sex scene, but there are also scenes of love and surprising tenderness.  I really enjoyed this novella, and I think if I went back to read it a third time, I’d find even more in it. 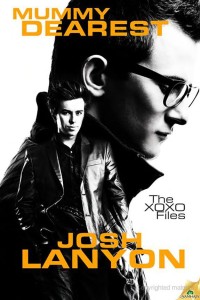 I sat down with Mummy Dearest expecting a light, tongue-in-cheek holiday novella. I got all that, but I also found that the story had deeper and more nuanced characters than I had anticipated, and as a result this tale of a quickie meet-cute attraction felt like something more substantial and enduring. Drew Larson is a junior professor who wants to bolster a tenure case already viewed with suspicion because of his romantic relationship with his department chair, Noah. Advised that an additional peer-reviewed article will improve his chances, he takes a quick trip to tiny Walsh, Wyoming, home of the Lasse Dime Museum’s Egyptian mummy exhibit.

Drew’s plans to examine and photograph Princess Merneith are thwarted by the appearance of Frasier Fortune, host of the cable documentary series The Mysterious. Initially wary of each other, they agree to join forces and Frasier films Drew’s examination of the mummy for his show.  Drew initially rebuffs Frasier’s overtures, but after a seemingly relationship-ending phone call with Noah, he joins Frasier for drinks, dinner, and mummy-related adventures. The entire story takes place over about 24 hours, and while the ending definitely suggests an ongoing relationship for Frasier and Drew there are a lot of loose ends. Mummy Dearest’s subtitle is The XOXO Files, Book 1, so the reader is clearly warned that the story and relationship are ongoing.

Drew is a classic Lanyon protagonist. He’s smart, handsome, prickly because he’s consciously insecure about his tenure and subconsciously about his relationship, and somewhat cynical. Frasier seems pretty uncomplicated at first, and he probably his, but he turns out to be more interesting than our initial introduction to him suggests. He’s not intellectual, probably not as smart as Drew, but he’s good at his job. And he’s a genuinely warm and decent person:

His face bumped into mine and his mouth latched on. I hadn’t been thinking in terms of kisses. That seemed something that belonged to another time, place, relationship, but the softness of his lips and beard—contrasting with his considerable hunger—robbed me of protest.

And then I didn’t want to protest. I think it was the ChapStick that did it; he tasted like ChapStick and Jack Daniels. That reminder of human vulnerability got to me in a way that polished experience wouldn’t have. Not that he had lied about the experience. This was a man who knew his job, but underneath his bravado was something I totally understood. Instead of insecurity making Fraser mean and greedy, he was generous. He kissed me with such sweetness it was almost unbearable. And he kept kissing me, giving me barely time to breathe, let alone think.

Drew’s wonder at Frasier’s generosity and straightforward affection sharpens his realization that his relationship with Noah required emotional compromises he never fully acknowledged. Frasier repeatedly cuts to the heart of the deals Drew has been making with himself:

I started to laugh. As a matter of fact, we visited Mirabelle every other weekend.

As an academic, one thing I really liked about Drew’s attraction to Frasier is that it captures why academics wind up in relationships with non-academics. They may not understand everything you do, or be as book-smart, but they can sure cut through the crap.

The plot is enjoyable and not too farfetched (hey, it’s a Halloween mummy story), and the Wyoming context is rendered with your usual dexterity. There were a few tiny glitches. It is highly unlikely that a bar in a Wyoming town the size of Walsh (let alone Walsh itself) would be non-smoking. And “instructor” was used interchangeably with “professor,” but they are distinct ranks in US academic parlance. But these weren’t enough to pull me out of the story and I had little trouble suspending disbelief, especially because so much of Drew’s career anxiety rang true and the rest of the Wyoming setting felt right on target.

For readers who think the Lasse Dime Museum is a stretch, I would just point them to real-life “museums” like this one (and there are many more out here in flyover country). The solution to the mystery seems particularly apropos, and I look forward to more installments with Drew and Frasier. I would also really like to see Noah get his comeuppance.