GUEST REVIEW: The Other Side of Us by Sarah Mayberry

The following is a guest review from Iola. I blog at Iola’s Christian Reads, where I review and recommend Christian fiction (and some non-fiction) from classic, contemporary and new authors in the field of Christian publishing. I read widely outside the Christian genre as well and am a particular fan of Regency Romance.

I’m active in the Amazon discussion, and can sometimes be found on Goodreads. I’m married with two children, and try and fit some real life around reading.

I’m a Kiwi, and wherever possible, I like to buy and read books that support local authors, especially when they are set in New Zealand or Australia. For the sake of good fiction, I’m even prepared to overlook the long-standing antipathy between our two countries, and support Australian authors as well (although I note that you have lived in New Zealand, so I suppose that could make you a temporary Kiwi). I see that your experience on Neighbours (in Australia) and Shortland St (in New Zealand) has provided the background to several of your novels, although I have to admit that I have never watched even a single episode of either series. Watching a daily soap opera would take away from my reading time. 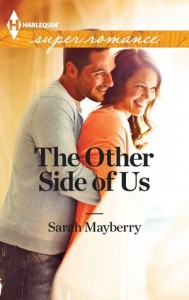 Anyway, when I came across the advance copy of your newest release, The Other Side of Us, on NetGalley, I was stoked (Americans – that’s Aussie/Kiwi for thrilled). Because, for some unknown reason, many of your ebooks simply aren’t available to me in New Zealand. I never see them in shops (well, most Harlequins only last a few weeks before they are replaced with the next batch).

I can see your new releases on Amazon, but they say they aren’t available to Asia/Pacific customers. I can see your books on the Harlequin site, but it gives me an error message every time I try and buy one. And the Kobo site only gives me a few older books, all of which I have downloaded. I have a Kindle and a Kobo, so I’m not fussy. I know this isn’t your problem, but this explains why I was so happy to get a free review copy – because I can’t pay for them even if I want to (and I do).

Anyway, enough. On to The Other Side of Us. Mackenzie Williams was a producer on popular daytime soap, Time and Again, until a car accident left her in hospital with multiple injuries, then months of rehabilitation. She is now living in remote Flinders (on the Mornington Peninsula, about an hour south of Melbourne) with her dog, Mr Smith, while she recovers enough to return to work–if her job is still there.

Oliver Garrett has moved with his schnauzer, Strudel, from Sydney to Flinder, to escape from the ruins of his marriage. Strudel forms an immediate attachment with Mr Smith, the dog next door, which places Oliver in close proximity to Mackenzie. Even though she is rude and career-minding, and represents everything he dislikes in a woman. Or so he thinks. As they try and rebuild their smashed lives, their relationship develops, and both Mackenzie and Oliver find they have more in common than they initially thought.

I really enjoyed The Other Side of Us. One of the problems I sometimes have with Harlequin books is that they are too short. I just want them to last longer. As a Super Romance, this is 85,000 words, and I think that it really benefits from having that long to develop the characters and tell the story. And to get in all that delicious romance.

The longer word count means that there is a lot of focus on the friendship and developing romantic relationship, not just the physical attraction. I like this, because it means that when I close the book (with a big happy sigh), I can actually believe in the Happy-Ever-After for Oliver and Mackenzie. Because a couple of your earlier, shorter books had so much heat that I didn’t really know the hero or heroine by the end, and I just wasn’t convinced that the relationship would stay the course. With The Other Side of Us, I believed it.

As well as plenty of mutual attraction, The Other Side of Us also has some good character development and even a few insights into deeper human nature, which is a little unexpected from a Harlequin, but totally welcome. I liked the comment about those who pursue music for the sake of success rather than for the love of the music. I suspect the same could be said for writing).

But, from the international point of view, this is an interesting comparison of cultural differences. Words like ‘mate’ and ‘mum’ imply an Australian setting, but the story opens with Oliver filling his tank with gas, not petrol. Later there is a mention of store-bought desert. Personally, I find this Americanised vocabulary annoying. Why do publishers do this? Do they think Americans don’t want to read anything ‘foreign’, or do they think Americans are too stupid to translate words like petrol and shop into American English?

Authors like you and Nalini Singh prove that Australasian authors can compete on the world stage in your respective genres. That’s not to say that other Australian and New Zealand authors can’t, more that many of them focus on such local plots and culture that it can be hard for them to find an international audience. But you’ve managed it. So, well done, and long may it continue. Now, if only I could actually buy your books on Kindle…

Previous article: REVIEW: A Kiss for Midwinter by Courtney Milan
Next Post: Must Have Apps for your iOS Tablet