The cheesy title refers to the epilogue, but I’m glad I took the time to dive into The Bride Wore Blue. 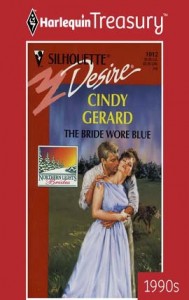 JD “Blue” Hazzard fell in love with Maggie “Stretch” Adams when they were teenagers, and his unrequited love has remained for fifteen years. He followed her career (she is an internationally known model), and when he happens to be flying his plane over the  lake where Maggie spent that one summer and spots a bombshell out in a bathing suit he has to land for a better look. What he finds is the woman of his dreams, is back in the Northern lakes remote wilderness and he is determined to win her love.

I didn’t think it was cute that the hero disabled his plane so that he had to stay over at her place after speaking with her for the first time in 15 years. Rather the opposite – much of the characters motivations and reactions bothered me. I did find some of the dialogue and scenes to be both fun and descriptive enough to have me right there in the northern wilderness of Minnesota. One of my favorite moments was when he stole a kiss:

“What?” He moved closer, even though he’d heard every word. “I can’t hear you. The noise,” he yelled, angling a thumb back toward the plane as he lowered his head until his ear was a whisper away from her mouth.

“I said, I think I’ll leave that to you!” she shouted.

“Aw, Stretch.” He cupped her shoulders in his hands and gave her his most soulful look. “I don’t want to leave you either!”

She shook her head vehemently. “No. That’s not what I said!”

She rolled her eyes. “I don’t believe this.”

She hadn’t any more than opened her mouth to adamantly correct him when he lowered his head to hers.

When I read this book I could see glimmers of the Cindy Gerard I know and love as an author. She manages to draw me in, make me care about the characters, and as cliché as this is – has such a way with words.

The heroine drove me absolutely nuts. “Most beautiful woman alive” type characters are hard enough to like without adding in some bonehead moves and an overall poor outlook on life. Maggie was raised in a lot of different foster homes growing up, and eventually found herself in New York (becoming famous) and in a relationship that now haunts her. She has the hunted delicate animal, won’t some big strong man save me and love me, and overall “poor me I’m a victim” attitude down pat. She can’t open up, love isn’t an option… it doesn’t tug at my heartstrings but instead made me want to slap her. When she finally opens up about the details of her hard life it’s too little too late for me. I found myself playing a sad song on a tiny violin for Maggie the rich, beautiful super model.

There was a little bit of plot with her ex (which was wholly unsatisfying) as well as a side plot regarding bear poachers that seemed to be a part of the book to explain why the hero was flying his plane around her cabin and to set us up with more info about the hero who will be featured in the next book (A bride for Abel Greene). Other than that, not much happened and the story was a dud. 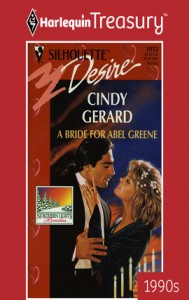 Mackenzie Kincaid walks herself up to Abel Greene’s cabin in Northern Minnesota in the dead of winter, her fifteen year old trouble making bad boy brother in tow. After attacking him and his dog, she realizes this is the man that she came to see. This giant of a man is in fact the one who advertised for a bride, he is the one she came to marry.

This story is a lot of emotions and conversation, very little action. The bulk takes place inside Abel’s cabin (the one he built himself), and issues of trust and love between Abel, Mackenzie, and the troubled fifteen year old brother she has brought with her to the wilderness. She is very open about the fact that she is broke, desperate, and in want of a man to take care of her and her brother.

Oh yes, this would-be bride who responded to an ad that Abel wished he had never placed is not the most forward thinking female. Never does searching for work, or her helping financially enter the picture she is just going to be his wife. While I admire that she was working and caring for her brother back in Los Angeles, she was so totally unprepared for the wilderness and so lacking in common sense it definitely hurt my enjoyment of the book. When she first walks up to Abel’s cabin she encounters a wolf and decides to fling her bag at it and run. After that brilliant move, she decides to attack Abel (aka hulking stranger on the cabin steps), and even after realizing that this is her potential husband she decides to punch the man:

She was out of control and she knew it. All her fears, all her failures, erupted as reckless, righteous outrage.

Drawing a deep, ragged breath, she tried to settle herself down. She tried to gather her composure. She even tried to smile—but when his scowl only deepened, she did the one thing she couldn’t have stopped if the earth had tilted and stopped turning.

With all the force of her one hundred five pounds—and emotions tried beyond all limits—she hauled back and slugged Abel Greene in his jutting jaw.

She got a grunt of surprise for her efforts…and possibly a broken knuckle.

Past shock, beyond fear, she stared, as above the thick collar of his wool jacket, the veins on his neck expanded, full and pulsing. Beneath the edge of his black stocking cap, another vein bulged at his temple. And over the roar of blood rushing through her ears, she heard yet one more distinct, crude oath that in English or any other language could never be mistaken for “Glad you could make it.”

The woman also screamed when she got up onto a horse, in addition to assaulting Abel for no good reason and making me so very glad for more modern and self-reliant heroines.

Abel has his own secrets and past – including that he is former CIA and freelance mercenary. Abel Greene has so much in common with the heroes that Cindy Gerard has become known for, and everything from his scowls to his tender big marshmallow heart melted this reader. He is so very lonely, and so wants to find love and companionship but is afraid to reach out for it.

Despite the lack of much in the way of a story, and the utter cringe-worthy ness of this shrieking ninny of a heroine, I really liked how the characters and romance progressed and how their conflicts resolved, even if things felt cut short and neatly wrapped up at the end.

Book #3:  A Bride for Crimson Falls 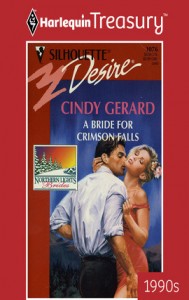 The third in this trilogy, we go to the Crimson Falls Hotel which is run by Scarlet and her teenage daughter Casey. The hotel is in bad repair, and while her friends (aka the leads of the previous novels) are concerned and want to help she will not accept charity. Instead, she has a raffle that raises $40,000 and gives the winner partial ownership in the hotel. As the story opens Colin Slater (the winner of the raffle) is arriving at the hotel to spend a few relaxing weeks at the insistence of his friends.

I was looking forward to this book because I have liked Scarlet and her daughter when they appeared in the previous books. I was not disappointed – I really liked these characters. I could clearly understand the motivations, and I really liked the supporting cast of characters as much as the leads. Scarlet was no weak miss hoping for a man to swoop in and save her. She’s hard working, independent, smart, and I wish I’d had more time to see her improve her business and get things going the way she wanted.

Her unprecedented reaction to him had done more than rattle her. It had made her forget who she was and what she stood for. She didn’t lie. She didn’t posture. And she sure as the world didn’t call a shovel a teaspoon. It was time for some honesty.

“You resent my presence? You don’t want me meddling?” he suggested, walking up beside her.

Her chin went up a notch. She shrugged apologetically. “I’m sorry, but yes. It’s nothing personal. It’s just that—”

Again he supplied the words she hadn’t quite worked up the candor to voice. “You needed my money, not my advice.”

Because his conclusions were so dead-on accurate, she averted her gaze from eyes that had gone soft with understanding. She fussed at a stain on the countertop.

“You know, you’re making it awfully hard to dislike you.”

“Good. Because you’re going to have to trust me on this one. There’s no need. I’m not here because I’m interested in my investment.”

Her head came up. She eyed him with doubt of the hopeful variety. “No?”

Our hero is a wealthy businessman who does large scale renovation projects, but he also sees no profit or gain from this particular hotel. In fact, he wants nothing to do with it or nature. While he realizes that his life is nothing but work (and maybe he doesn’t like that) I can appreciate at the same time that he doesn’t decide to see the hotel as a lucrative venture when it’s so clearly not one. It is an old historic building in need of a lot of repair and work.

This novel was by far the strongest of the three, finding a nice balance between a budding romance, characters with a past, a strong supporting cast of characters (including a prostitute’s ghost) and finding a place of happily ever after. My complaint with this one was the way the poor country heroine, rich city hero situation worked out. His motives felt true, but it bothered me never the less.

From May F., Confessions of a Chocoholic

If you want to write a guest review of a newly digitized backlist title, please send them to jane @ dearauthor.com