First, I want to rant about the horrible scanning errors in this book. One or two wouldn’t really have bothered me and I’m hardly the grammar police, but I counted over one-hundred of them (number 1 for letters I and l, regular dashes where there should be emdashes, random words that are italicized or underlined, etc) And because there were so many, I kept getting jerked out of the story. I do not understand why Harlequin hasn’t taken the time to proofread these books after scanning them. Even though they are not agency priced and can be purchased on sale, they aren’t exactly selling them for 99¢ either. I have a big list of Treasury titles I want to buy and an even longer list of ones I hope they release. But I find myself reluctant to plunk down any more money for books with this many errors in them. /rant 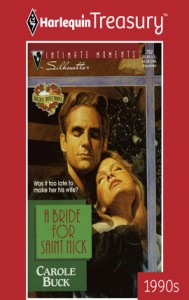 Carole Buck was an auto-buy author for me when she was publishing. I’m not sure why she stopped writing. I originally read A Bride for Saint Nick when it was published in December 1996. It’s part of the ‘Holiday Honeymoons’ series written alternately by Ms. Buck and Merline Lovelace. The series consists of three titles for the Silhouette Desire line, two for Silhouette Intimate Moments, and an anthology. But these books are only loosely connected by the travel agency owned by the hero of this particular story, so can be read as stand-alones.

The book has stood the test of time for the most part. The fact that one of the hero’s businesses is a travel agency and that a pre-school teacher allows a total stranger to drive one of her students to the ER date it the most IMO. The plot is rather convoluted, but makes sense as you are reading. The hero and heroine met and fell in love while he was working undercover for the Justice Department. He did not tell her he was undercover in a misguided effort to protect her. She is told he was killed and is put into the Witness Security Program. Meanwhile, the hero who was injured in the fiery car crash meant to kill him endures multiple surgeries. He has a new face, but is severely scarred on his neck, back, and right hand which is also missing part of one finger. His voice was affected as his throat was injured in the crash.

The hero rediscovers the heroine through sheer coincidence when he recognizes her in one of the travel pictures from clients the woman who runs his travel agency continually forwards to him from their happy customers. He convinces himself he’s only going to check on her to make sure she’s truly happy, but won’t interfere in her new life. There’s a secret baby (well secret nearly-five-year-old). That plot usually doesn’t work for me, but I’ll give this heroine a pass since she thought the hero was dead. She was also raped by the villain the night the hero was supposedly killed, so isn’t sure who her child’s biological father is. The hero doesn’t tell her who he is right away, even though he knows he’s wrong to keep it a secret. And the child is very precocious. None of that should work on its own much less together and yet it does. The hero and heroine’s motivations for the web of lies they’re entangled in are understandable. I could sympathize with why the hero waits to tell her who he is. And when he finally learns about the rape, I believed he would love Andy regardless if he hadn’t been the biological father. I loved the fact the hero and heroine have actual conversations with each other.

What didn’t work for me as much this time around was the over-the-top villain. I hadn’t read that many in books back in the mid-nineties, but most romantic suspense novels seem to have them now. I long for a more normal villain.

This book has a touch of suspense, but is mainly about the relationship between the h/h. I don’t normally grade my books, but I’d give this one a B+.