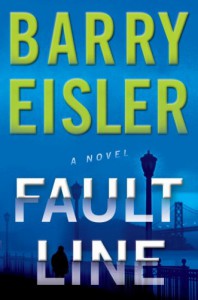 I was literally in the middle of writing this review when the news broke on Tuesday that an Iranian nuclear physics professor was killed by a bomb left outside his home in Tehran. Now I know that the circumstances of this man’s murder have nothing in common with one of the opening scenes in your book other than the words “Iranian nuclear scientist,” but I must confess that I am quite sure I would not have paid nearly as much attention to that news story had I not just finished reading your latest book,Fault Line. I am reminded that real life is as compelling and as fraught with peril as is the best suspense fiction. And that sometimes the two intersect in the most unexpected of ways.

This is not the first guest review of your book to appear here. Carolyn Jewel  wrote one back in December that appeared before I had a chance to even start reading the copy Jane so kindly gave me. I’m glad I read Carolyn’s review first because her perspective as a writer, technology sector worker, and resident of the Bay Area gave your book a great deal of credibility. I am none of those three things. I am a working mom from the midwest who devours about 4 romances a week. I would have taken the book at face value anyway, but it’s nice to know that the book is grounded in reality. You include a lot of detail in the book that is really helpful in setting your scenes–whether in the location is Istanbul or Palo Alto. I liked the way that you gave me a feel for two places that are equally foreign to me.

For those who don’t know,  Fault Line is primarily a suspense story involving a special piece of encryption software called Obsidian. The developer of the software is murdered just before he is to meet with his attorney, Alex Trevan. Alex is responsible for obtaining a patent for Obsidian as well as finding venture capitalists to bring Obsidian to market. Alex stands to gain a great deal should Obsidian perform as promised. When one of Alex’s friends who works in the US Patent Office, and was helping keep Alex informed about the patent’s status, suddenly also turns up dead, Alex becomes suspicious. But  then someone breaks into Alex’s house in the middle of the night and  Alex knows he needs help. So he turns to his older brother, Ben, an army soldier who is an assasin for the US government’s war on terror. They’ve been estranged for many years. Ben comes home to Palo Alto to help. It’s his first trip there since the death of their mother and old hurts and resentments surface time and again as they attempt to solve the mystery of who is after Obsidian and why. Also mixed up in the whole affair is Sarah Hosseini, an attractive young lawyer in Alex’s firm who happens to be an Iranian American.

As has been pointed out repeatedly, this book is not a romance. Nonetheless, I think it would appeal to other romance readers like myself because we like to read about relationships, or more specifically, relationships that have a positive outcome. Personally, I was just as interested in what was going on between Ben and Alex (as well as how Sarah factored in) as I was in the race to protect Obsidian and save Alex and Sarah’s lives. Ben and Alex had seen their family torn apart by a tragedy that also left behind a good deal of guilt and bitterness. I liked the way you used the circumstances surrounding Obsidian to reveal just what kind of men Ben and Alex had become–what their strengths and weaknesses were, and how they had moved on (or not) from the family tragedy. As the stress builds over their circumstances, more and more of that anger and bitterness is let out until they finally really talk to one another. I also really liked the way that both Ben and Alex had the opportunity to do heroic stuff–in other words, the book is not all about Ben riding to the rescue.

But there is also the developing relationship between Ben and Sarah that would appeal to other romance readers. There is some fabulous dialogue between the two of them. Ben leaps to conclusions about Sarah simply because of her race–he is instantly suspicious of her. Sarah stands up to him and challenges his thinking. In return, Ben recognizes that Sarah has made some safe choices in her life and I sense he’s challenging her to take risks. When lust blooms between them it fits, and the romance reader in me hopes that there will be a lot more to this relationship–in a future book perhaps?

This book has a great opening line: “The last thing Richard Hilzoy thought before the bullet entered his brain was, Things are really looking up.” That caught my attention. But there was a lot of ground to cover before Ben and Alex got together. According to my Stanza reader (I read an e-copy on my ipod touch), I was 30% into the book when Alex finally emailed Ben. I found that first 30% a little slow-going at times. The pace was much faster once Ben & Alex were together and I pretty much read straight through from there. I give this book a solid B+.

I will be watching for your next book and perhaps an opportunity to meet you at the RT book signing this spring. Meanwhile, I’ll be looking for some of your older titles. Finally, and again, my thanks to Jane and the DA crew for my copy of Fault Line and the chance to write this review.

Previous article: REVIEW: How I Met My Countess by Elizabeth Boyle
Next Post: REVIEW: Wish You Were Dead by Todd Strasser