The Bennet sisters have been summoned from New York City to help stop their mother feeding their father steak and donuts after heart surgery, to tidy up their crumbling family home and to haul their three sisters out of various states of arrested development. Then Chip Bingley arrives in suburban Cincinnati, clearly in need of a wife… 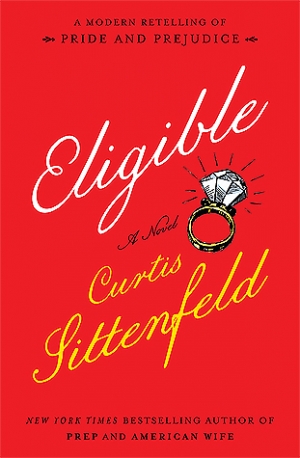 I have been looking forward to Eligible for some time. It’s been sitting by my bedside table for some months. I’ve been saving it as a little light relief from preparing the novels and plays that I’ll be teaching in the coming academic year as well as educational theory books I’m reading for professional development. I picked it up a couple of days ago after finishing five serious and sombre books.

I haven’t read any other contributions to The Austen Project, the series where established authors such as Alexander McCall Smith and Val McDermid have been invited to recast plots from Jane Austen’s major novels in modern times. I am open to the idea, I enjoy watching Shakespeare updated, but the only one of this series I’ve been really eager to read is Pride & Prejudice. That is mainly because I loved your previous books Prep & An American Wife, and I thought your take on P&P would be fresh and possibly acerbic. That said, I was wary as other entries in The Austen Project have not had rave reviews, and quite honestly, I am not sure I see the point of the exercise – why read modernised Austen when we have the real thing on tap?

That said, Eligible is extremely readable: I started it late on Sunday evening and was finished by midnight on Monday. This was partly curiosity because P&P is a book I’ve read frequently, studied at university and taught five or six times. I enjoy re-interpretations, although the addition of zombies did not work for me. But shifting the action to Cincinnati, making Darcy and Bingley medical professionals and including a somewhat curious reality TV show were touches that brought the story into the modern world in a more or less convincing way. I’m not so sure that splitting Wickham into the scuzzy Jasper Wick, Liz’s married lover and Ham, Lydia’s transgender beau was the best solution, although Ham is a great character, incredibly patient with the tricky Bennet family. It was amusing to see how you took characters from the book and skewed them: Lady Catherine de Bourgh’s transition into a feminist icon was witty, and it was probably wise to make Caroline Bingley the main villain of the piece.

Other reviewers have criticised the way Mrs Bennet in particular is portrayed as a snobbish bigot. You are perhaps a little harsh on her, and Mr Bennet’s cutting wit is a little blunt, but there are still touches of genius, such as the decision to make Mrs Bennet a compulsive buyer and hoarder of household goods. The bigotry makes Mrs Bennet’s social unacceptability a little more explicable and makes Liz’s determination to stand by her family a touch more heroic, but I know that there are readers who will be uncomfortable with Mrs B’s old-fashioned racism and homophobia. In ways, the fact that both Jasper Wick and Mrs Bennet’s main transgressions are manifestations of prejudice that make us feel uncomfortable seems to me a fair re-casting of Austen’s own laser skewering of the pretentious and arrogant. Your greatest success is with the characterisation of minor figures, notably Charlotte Lucas and Cousin Willie, as well as Mary, the resolutely single sister whose inner life is given more space and time.

But what about Liz and Darcy? Their relationship is after all, the heart of the book. This did work for me, particularly because the omniscient narrator allows us a few more peeks into Darcy’s psyche and responses than the original. I remain baffled by Bingley and Darcy’s friendship, which has always seemed inexplicable given Darcy’s depths and Bingley’s total superficiality, but all of the twists and turns of Darcy’s courtship of Liz were as satisfying as ever, and Liz’s moments of reflection and realisation of her own prejudice and misjudgement were almost as acute as Lizzie Bennet’s in Austen’s original. Another filter was my own fault – I was a committed follower of the Lizzie Bennet Diaries (http://www.pemberleydigital.com/the-lizzie-bennet-diaries/story-lbd/video-diaries/) when they first came out in 2012. The vlog-version of P&P is very close to the book, especially in looking at the ages of the main characters. Sittenfeld’s major shift has been to make Jane and Lizzie much older than in the original. This has two effects – firstly to make Mrs Bennet’s panic at her daughters’ unmarried state more acute and second, to foster a greater sense of urgency for Jane in particular in her search for Mr Right. I’m not wholly convinced that this was necessary, but it does keep the pace up.

Overall, I thoroughly enjoyed this update with a twist and if you are looking for a fast, engaging read that takes some cute liberties and cunning turns, it will fill the bill admirably.
Zeba